Retired General Tommy Franks never cared for the term "shock and awe", and really did not see his tactics in the way they were described by the mainstream media back in 2003, as U.S. forces invaded Iraq. The U.S. made use of overwhelming air superiority backed by the rapid use of just as overwhelming ground forces. The whole idea of such an intense show of force is to rapidly dominate the area of operations in such a way as to deteriorate the enemy's perception of their own capabilities. To paralyze them in either fear, confusion or both.

The U.S. did not invent "shock and awe". The military doctrine of "Overkill" had been a core tenet of Soviet wargaming and stated capabilities throughout the Cold War. Of course, the Soviets did not invent "Overkill", they themselves had borrowed the idea from the tactical aggression shown by Nazi Germany's "Blitzkreig" as that army quickly took and held ground throughout the early days of World War II. No, it doesn't begin there either. Look up General Sherman's "March across the South", or tactics used by the Roman legions as they forced "civilization" upon much of Europe. The simultaneous applications of speed, force, and demoralization have long been the tactics used by militarily superior forces to reduce and degrade enemy resistance.

Broader markets have now, after Tuesday, come close to retaking all of the ground lost since early last week. That wasn't really too painful, now was it?... Or, was it? Depends on who you are. The S&P 500 tacked an increase of 1.4% Tuesday on top of Monday's 1.6% gain. The Nasdaq Composite posted an increase of 1.6% Tuesday after scoring a 2.5% rally on Monday. Remember that 21 day EMA that I had shown you as a potential tripping point for the S&P 500? Yeah, like a hot knife through butter. Not only did that line not provide any resistance to our marketplace's broadest large cap index, the spot perhaps acted as a slingshot, flinging prices higher on a gap open... "shock and awe".

At both the New York Stock Exchange and the Nasdaq Market Site, winners beat losers by a rough 3 to 1 or better, while advancing volume beat declining volume even as the short squeeze stocks have made deciphering the intent of overall trading volume more difficult. Aggregate trading volume was, by the way, heavy once again. For a second consecutive session, all 11 S&P sector SPDR ETFs closed the day higher than they were 24 hours earlier. My guess is that most readers have already noticed that Tuesday's sector performance tables were led by three cyclical type groups... the Financials, Industrials, and Discretionaries. At the bottom of that table, you'll find the Staples, the REITs, and Health Care... sectors more defensive in nature... "overkill".

Easy question to ask. The answer is far more complex than the question, but not difficult to understand. We will explain this as if writing for a novice so that no one among you gets left behind. For my more advanced readers, I apologize, and you may certainly skip ahead, but I think you do understand the need for teamwork as we move forward. We'll win, or we'll lose, but we'll never forget that we are all not in the same place in terms of financial education and experience.

Right off the top, the bubble has burst for the "short squeeze" names such as GameStop (GME) and AMC Entertainment (AMC) . Short interest is down. There is no longer an overbearing need for shorts to cover their positions, nor is there a need for the very same funds that were tagged with short side losses to make long side sales (which did damage overall markets) in order to meet capital obligations and/or rebalance exposure. You will hear stories of a few who made tens of thousands on small investments. What you may hear less of are stories of portfolio managers covering $25 shorts at $400, and retail investors who chased stock prices into the $400's, to get out of those positions at a relative pittance, but those stories are there. Trust me.

Did I mention the Biden administration's intent to increase vaccine distribution to the states by an additional 5% for three weeks on top of the already announced 16% increase?

One would think that with increased potential for looser fiscal conditions, and as the FOMC continues to expand the monetary base... that U.S. dollar valuations would weaken relative to peer reserve currencies. So far, at least of late, this is not the case. Sure, money supply grows, and in theory that should soften the purchasing power of one single U.S. dollar. Sure. Simple model. Now add in the fact that being short U.S. dollars in some (any) way is one of the most crowded trades on Wall Street and mix in a badly lagging European economy with a touch of chaos in Italy (BTW, Mario's back.) and there are reasons to seek safety in the U.S. currency. The next pain trade? Maybe.

Back to understanding the spreads created by the yield curve. I want you to take a look at this. This is the spread between the US Three Month T-Bill and the US Ten Year Note charted over three months.

Readers quickly see that the environment has drastically changed in 2021, and that perhaps this week, this spread might challenge the highs of early January. Now, let's overlay this spread with the Dow Jones US Banks Index.

The correlation is quite telling. In fact, one might see that still early in earnings season, a season that has been a good one to date, but was a little sloppy for some of the banks, that the spread has started to outperform the banks in aggregate. We all know, or at least I think, that no matter how many ways banks evolve in order to remain profitable, that markets still rely upon net interest margin in terms of equity valuation for the industry. Thus, in conclusion (sounds collegiate) either the yield curve must flatten - I think unlikely at least for now - or the banks must catch up. I feel that this bid that the banks have benefitted from recently has room to run. I remain long JP Morgan (JPM) , Wells Fargo (WFC) and US Bancorp (USB) , and have been adding to my overall exposure to the group as the group is down over the past three weeks.

Do we really know what Treasuries will do long-term? Of course not. While the U.S. Treasury and the central bank have done all they can and will do more to create an inflationary environment, one thing they can not do, is create velocity. The federal government can to a limited degree create some velocity, but even that will stall unless the consumer participates more aggressively.

This is why the $14 billion worth of debt that Apple (AAPL) brought to market on Tuesday was brilliant. Yes, Apple stands with $196 billion worth of cash and marketable securities on the balance sheet. Still, Apple looks to borrow at these rates over six maturities in order to at least in part, support the firm's share repurchase program. Yes, the stock is up 75% over a year's time and trades at 31 times forward looking earnings.

Demand was good. Bid to cover was more than two to one across the entire offering, despite the fact that almost half of the offering bears maturities of between 20 and 40 years. What could possibly go wrong? For the bondholders? For the record, Barron's reports that CreditSights has an "Underperform" rating on Apple's long-term debt, as for them, there is concern over regulatory risk over future decades. Yes, brilliant. CEO Tim Cook is indeed good at his job.

Yes, both Alphabet (GOOGL) and Amazon (AMZN) reported incredibly successful quarters. There is not the space left in this column to cover either one of these in depth, but I would expect to focus on at least one or the other for Real Money and Real Money Pro in a few hours. The stocks are behaving differently overnight as GOOGL is up a rough 7% at the time of this writing and AMZN is basically flat from last night's closing price after running around a little.

The big story, probably bigger than the Super Bowl this week, is now the fact that Jeff Bezos is stepping aside as CEO at Amazon later this year to be replaced in that role by Andy Jassy who has run Amazon Web Services since the early days. Jassy is fine, but this is probably still a tradeable event. Out with a partial, back in later at a cheaper price? If only it were so easy. Yet still, I feel attracted to the trade as a moth to a flame. 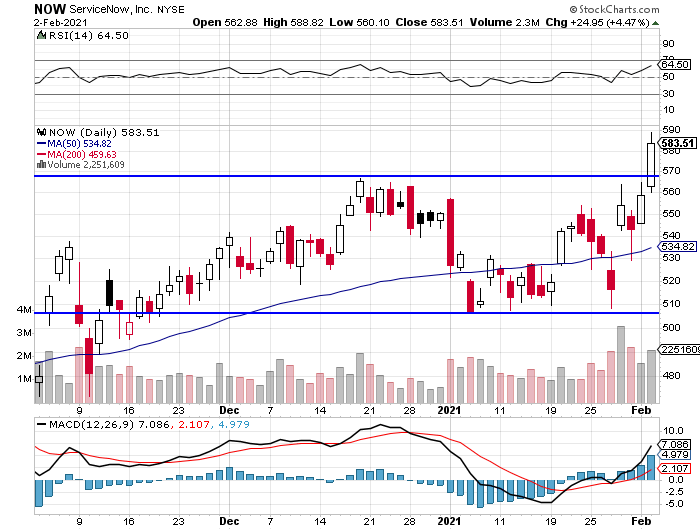 On Tuesday, the shares of ServiceNow (NOW) broke out of a mini basing pattern (without creating a gap) in response to Argus Research's Joseph Bonner, who already had a "buy" rating on the stock increasing his price target from $600 to $640. Bonner, by the way, is rated at five stars by TipRanks and is considered an elite level analyst by Wall Street. I think that I will do Bonner one better. I am already long the stock, and my price target had already been $650. Based on the taking of pivot ($566) without having to worry about a momentum sapping gap higher... My new price target is now $680. My panic point now moves (only slightly) higher as well to $534 (the 50 day SMA).

Get an email alert each time I write an article for Real Money. Click the "+Follow" next to my byline to this article.
TAGS: Short-selling | Earnings | Economy | Federal Reserve | Investing | Markets | Options | Stocks | Technical Analysis | Trading