I picked AMMO, Inc (POWW) as my Stock of the Week this morning, but I want to expand on why I think this stock is going to be a longer-term winner. This is a stock that will be a core holding and will remain on my watch list for a while. I will be looking for opportunities to buy it on any pullbacks.

In my 25 years of trading, my biggest winners have typically been stocks that are seeing a large, sustained increase in volume along with major revenue growth. When those two elements combine, there tends to be substantial price appreciation that can last months.

POWW has both these elements going for it. 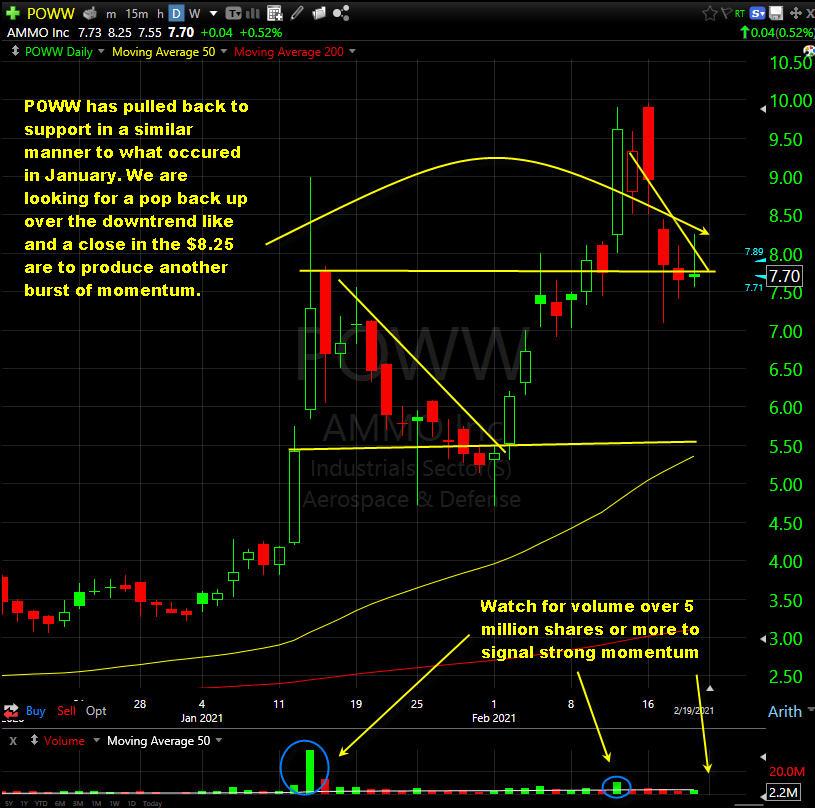 As far as revenues, POWW saw a jump of 500% in the most recent quarter with sales of $16.6 million. That should go much higher due to its large backorder and once it closes its deal to buy GunBrokers.com. GunBrokers.com is expecting to see a substantial jump in revenues in 2021 from the $60 million level it will earn in 2020. That alone will cause revenues to double sequentially in the quarter ended June 2021

Big revenue growth combined with a surge in volume is the secret formula that typically leads to big winners.

Here is my complete write-up on POWW:

AMMO designs and manufactures ammunition for use in guns in various markets, including law enforcement, military, sport shooting, and self-defense. The Company was founded in 2016 with a vision to change, innovate, and invigorate the complacent munitions industry. AMMO's patented STREAK Visual Ammunition allows a shooter to see the path of a bullet in dim lighting. It also provides subsonic munitions and armor-piercing rounds for military use. Details can be found on its website.

There currently is unprecedented demand for ammunition, and there are no signs of slowing. The Company is aggressively positioning to take advantage of the strong market and is building a new factory that it hopes to have in service in May of 2022. It is anticipated that this factory will reduce operating costs by at least $1 million per year

The Company recently reported that its fiscal third-quarter sales increased 500% over last year to $16.6 million. The Company expects $20 million in sales for the quarter ending March 31. Previously the Company announced a 256% year-over-year increase in orders shipped and is working around the clock. The Company's backlog was $80 million on September 28, $100 million on October 20, $135 million on December 8, and hit $180 million on February 1, 2021.

On top of the very strong demand for ammunition, POWW has entered into a Letter of Intent to acquire GunBrokers.com, the largest online auction marketplace dedicated to guns. The deal is expected to be highly accretive to earnings and will produce significant free cash flow and positive eps if it is closed. POWW is working to complete the transaction before the end of its fiscal year on March 31.

Fear of gun control, a 40% jump in gun sales to women, and the volatile political climate have contributed to strong demand for guns and ammunition. There are reports that ammunition sales are up over 130% since 2019 and as much as 500% in some areas of the country.

POWW is at a significant inflection point as it closes the GunBrokers.com deal and sees its backlog of ammunition business continue to grow. It should continue to see robust revenue growth, especially after the consolidation of GunBrokers.com.

Technically, the stock had pulled back following its earnings report and is around support at $7.50 area. We are looking for the anticipation of the GunBrokers.com deal to provide good support and cause some anticipatory buying into the close of the fiscal year on March 31. The next support level is around the $7 area and then at the 50-day simple moving average.

Get an email alert each time I write an article for Real Money. Click the "+Follow" next to my byline to this article.
TAGS: Mergers and Acquisitions | Investing | Stocks | Technical Analysis | Trading | Manufacturing