Gogo Inc.  (GOGO) provides in-flight broadband connectivity and wireless entertainment services for the aviation industry. It has operated in two main segments. Commercial airlines (CA) and business aviation (BA). The CA sector has struggled and has been financed largely by the profitable BA sector.

In August GOGO entered into a deal with bankrupt Intelsat to sell its CA division for $400 million. It was announced that that deal closed today. This has several positive aspects. It should allow GOGO to become cash flow positive, it makes it simple to refinance its debt, and it preserves substantial Net Operating Losses (NOLs).

There has been some talk that GOGO could be a target of Private Equity. Private equity firm GTCR LLC already owns around 15% of the company and has an option to increase that ownership.

The closing of the deal with Intelsat has occurred much sooner than anticipated and should accelerate the transformation. The CEO of Gogo, Oakleigh Thorne, commented:

"The sale of our Commercial Aviation division to Intelsat is transformational for Gogo and remains on track for closing. The Transaction will give us the ability to de-lever, generate positive free cash flow, take advantage of our substantial NOL carryforwards, and invest in strengthening our Business Aviation franchise. The rapid recovery in BA is a testament to the strength of our business."

"William Blair analyst Louie DiPalma noted that Gogo completed the sale of its commercial inflight connectivity division to IntelSat for $400M in cash, telling investors that he views the "new Gogo" as "essentially a high-margin monopoly for the business jet inflight connectivity market." The company's EBITDA margin is high due to the fact that for small and midsize business jets, "Gogo is the only viable option," He reiterates an Outperform rating on Gogo shares, adding that he sees significant upside despite the stock having already gained significantly in value." 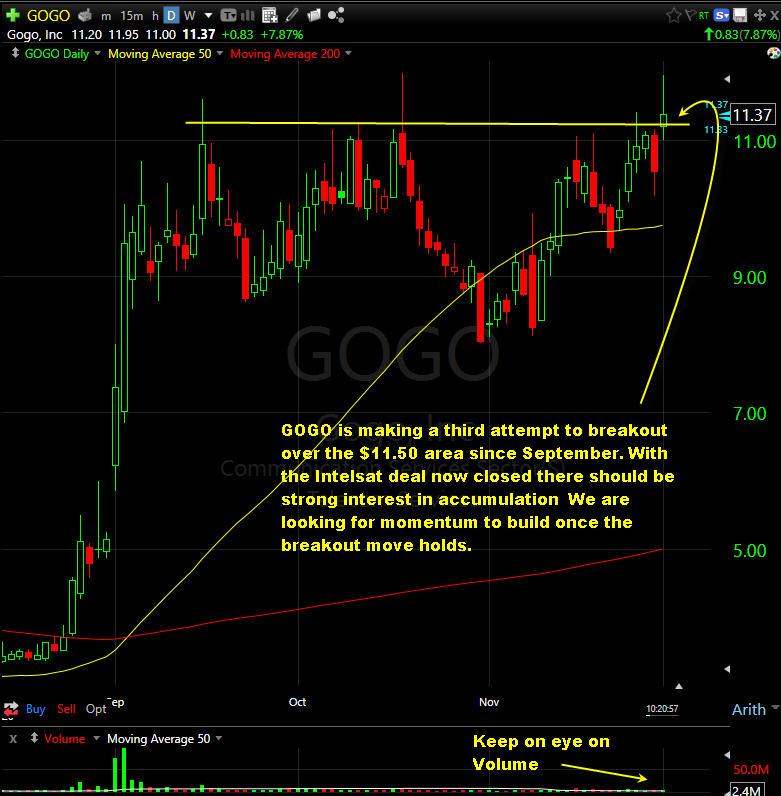 I've been building a GOGO position and plan to add to it as it develops further.

Get an email alert each time I write an article for Real Money. Click the "+Follow" next to my byline to this article.
TAGS: Investing | Stocks | Technical Analysis | Trading | Airlines | Technology