In his  second "Executive Decision" segment of Mad Money Friday night, Jim Cramer spoke with Bryan Fairbanks, president and CEO of composite decking maker Trex Co (TREX) . Shares of Trex are up 63% over the past year as people around the nation scrambled to upgrade their homes and backyards amidst the pandemic.

Fairbanks said Trex's primary competitor continues to be wood, which accounts for 78% of all decks in America. There is plenty of room for all players, he added, when asked about rival Azek (AZEK) .

Wood is not as environmentally friendly as you might think, Fairbanks explained. Pressure treated lumber involves a lot of chemicals and the product only lasts for 10 to 15 years. At the end of its life, all of those chemicals end up back in the soil.

Trex, by comparison, lasts a lifetime and the company uses 400 million pounds of plastics every year that would otherwise end up in landfills.

Trex is now available in over 6,700 locations across the nation. The company caters to both contractors and the do-it-yourself homeowner who's looking for a superior decking material.

Let's check out the charts of TREX again. We looked at TREX back on January 22 where we concluded that "TREX may correct down to the $85 area if weakness from the broad market has its way. Some new accumulation (buying) around the $85 area should set the stage for further gains to the $115 area."

In this updated daily bar chart of TREX, below, we can see that prices have indeed declined to the $85 area but that does not mean we should become buyers. Let's dig deeper. Prices are trading below the cresting 50-day moving average line. The slower-to-react 200-day moving average line is starting to roll over and could be tested in the days ahead.

The On-Balance-Volume (OBV) line has weakened from the middle of February and the Moving Average Convergence Divergence (MACD) oscillator has generated an outright sell signal when it fell below the zero line recently.

In this weekly Japanese candlestick chart of TREX, below, we can see a bearish dark cloud cover at the top of the chart marking a top reversal. The most recent candle shows a large lower shadow telling us that traders have so far rejected the lows. Prices are above the rising 40-week moving average line but we could see that line tested in the weeks ahead.

The weekly OBV line shows weakness after a small double top pattern telling us that sellers of TREX have been more aggressive. The MACD oscillator just crossed to the downside for a take profit sell signal.

In this daily Point and Figure chart of TREX, below, we can see that the software is projecting the $70 area as a potential downside price objective. 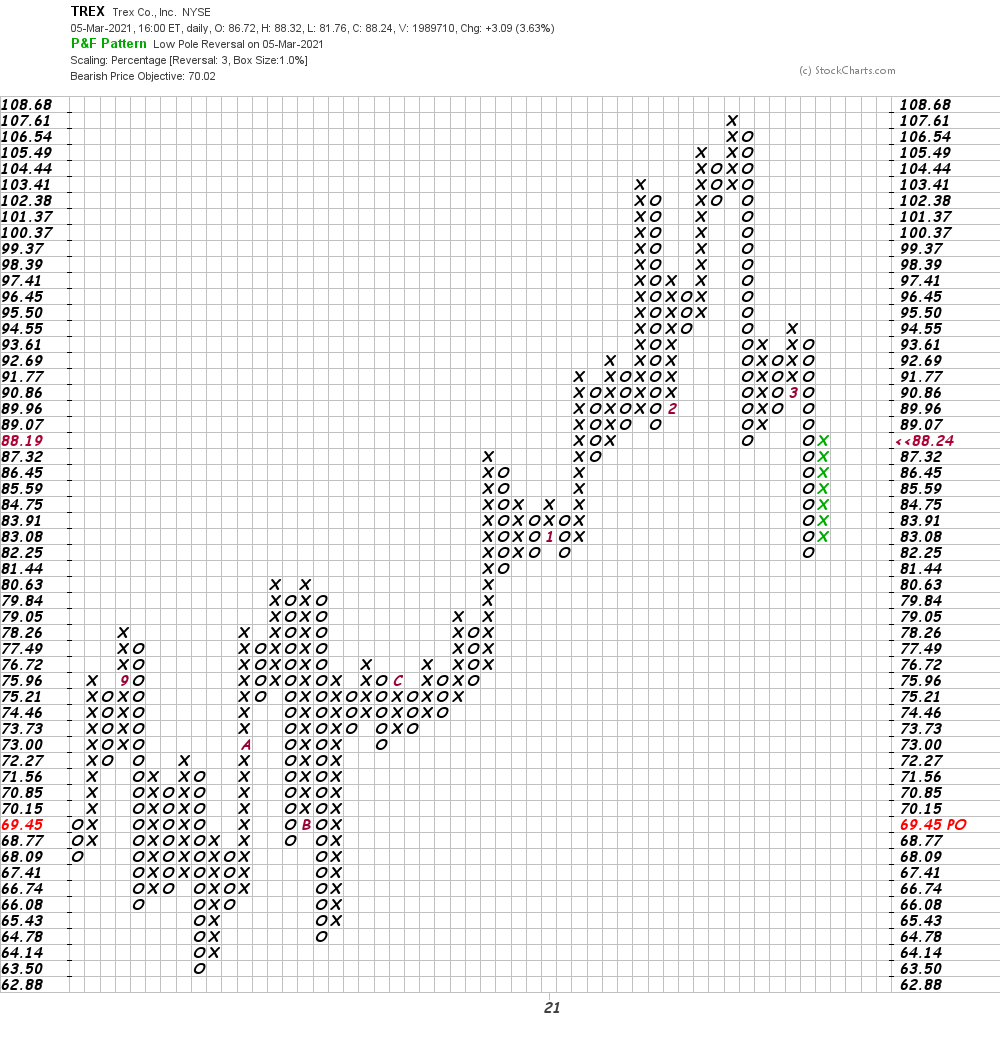 In this weekly Point and Figure chart of TREX, below, we can see a potential price target in the $57 area.

Bottom line strategy: Yes, TREX has pulled back on the charts and yes, the housing market and home improvement market still appear very strong but the charts suggest further declines are possible. Let's defer purchases of TREX until we get clear signs the decline in the broad market is over and TREX shows new accumulation.

Get an email alert each time I write an article for Real Money. Click the "+Follow" next to my byline to this article.
TAGS: Economy | Investing | Markets | Stocks | Technical Analysis | Trading | Mad Money | Executive Interview | Basic Materials