Slootman explained that investors are still apparently getting used to Snowflake's consumption revenue model. He said unlike a typical SaaS model, which is contractual and easier to follow, Snowflake is consumption-based and varies depending on usage.

That means when Snowflake has a surge of new customers with no history, they have less visibility into how those customers will grow, which leads to more conservative forecasts. Given past history, the growth for these new customers should snowball into great earnings down the road, he said.

Slootman touted customers like Instacart as proof of the value it offers. Using Snowflake, Instacart was able to scale up to meet the demand of the pandemic without a hitch.

Let's check on the charts of SNOW before making up our minds. In our November 30 review of SNOW we told readers that "Traders should have had plenty of opportunities to take profits by now. With earnings due out tomorrow I would get flat SNOW and avoid the long side considering the bearish target on the Point and Figure chart."

In this updated daily bar chart of SNOW, below, we can see that prices are still weak. SNOW rebounded in February but trading volume did not increase and prices could not sustain themselves above the 50-day and 200-day moving averages for long. The slope of the 50-day line is negative and it just crossed below the 200-day line for a (belated) bearish dead or death cross sell signal.

The On-Balance-Volume (OBV) line shows choppy weakness from November telling us that sellers of SNOW have been more aggressive. The Moving Average Convergence Divergence (MACD) oscillator is pointed down after a failure at the underside of the zero line.

In this weekly Japanese candlestick chart of SNOW, below, we see a mixed picture. We can see some lower shadows in January and February telling us that some traders are rejecting the lows but the large upper shadow at the beginning of February gets our attention. Prices failed at the 40-week moving average line.

The weekly OBV line has been weak since November. The MACD oscillator is below the zero line (bearish) but narrowing.

In this daily Point and Figure chart of SNOW, below, we can see that the software is projecting a downside price target in the $181 area. 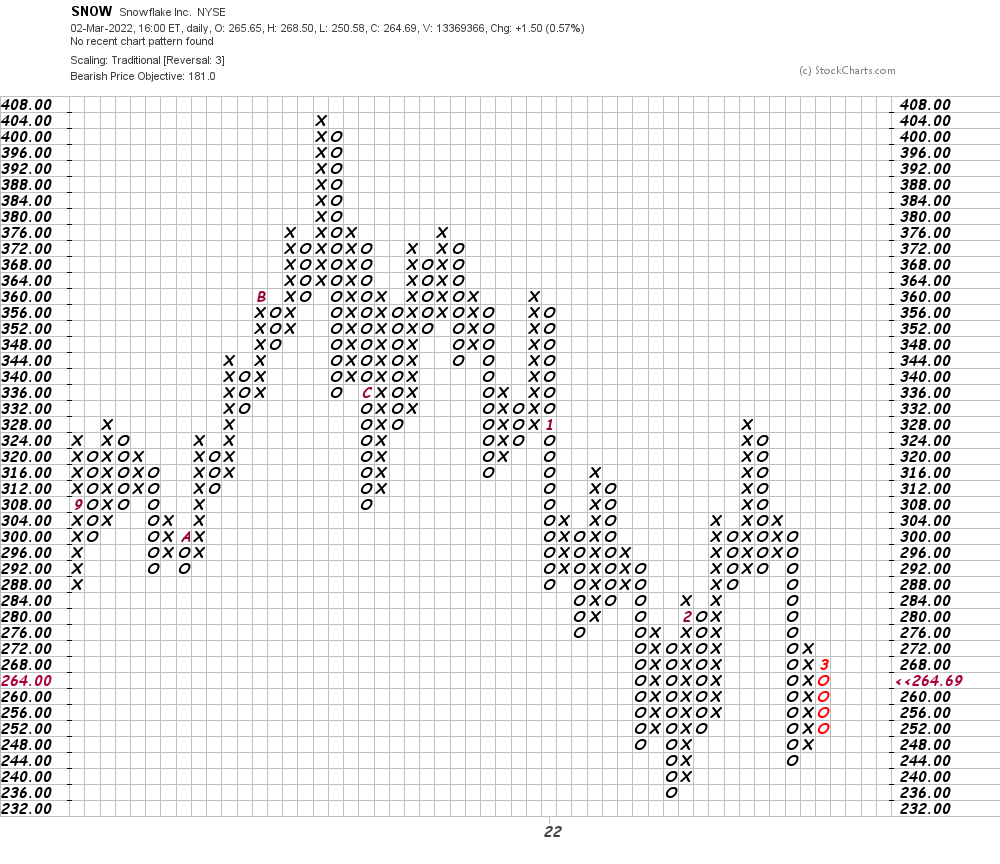 In this second Point and Figure chart of SNOW, below, we used weekly price data to get a $113 price target.

Bottom line strategy: Continue to avoid the long side of SNOW as $181 is the downside price target on the daily Point and Figure chart above.