Schulman first gave an update on the start of the holiday shopping season. He said digital sales were flat this year, after rising by 50% last year. Retail sales, however, have fallen 26% from their pre-pandemic levels in 2019. These trends indicate that online shopping is here to stay.

PayPal forecast 55 million net-new active users this year and Schulman said it remains on target to deliver that number.

When asked about involvement in the popular buy-now, pay-later space, Schulman said that while PayPal doesn't get a lot of the hype, it is one of the top four players in the world. Buy-now, pay-later sales were up 400% year-over-year on Black Friday.

Schulman also commented on the rumors that PayPal was in talks to acquire Pinterest (PINS) . He said that PayPal looks at hundreds of potential acquisitions every year and has spoken to many many companies.

Finally, when asked about competition like Shopify (SHOP) and Square (SQ) , Schulman noted that one out of every four transactions on Shopify is powered by PayPal, so as e-commerce grows, so too does PayPal.

We reviewed the charts of PYPL on November 8 and wrote that " PYPL could bounce after they report their numbers but the charts and indicators do not suggest that PYPL will quickly resume its longer-term uptrend. I would avoid the long side of PYPL for now."

In this daily bar chart of PYPL, below, we see mostly negative signals. Prices are in downtrend from late July and PYPL trades below the declining 50-day moving average line as well as the declining 200-day line. We can see a bearish dead or death cross of these two indicators in early November. The trading volume shows an increase as prices have declined telling us that investors are voting with their feet, so to speak.

The On-Balance-Volume (OBV) shows a steep decline from mid-October telling us that sellers of PYPL have been more aggressive. The 12-day price momentum study shows roughly equal lows while prices have made lower lows. This is a type of bullish divergence and should be monitored more closely in the days ahead.

In this weekly Japanese candlestick chart of PYPL, below, we see a bearish chart but with one exception. Prices are in a steep decline as they trade below the bearish 40-week moving average line. A potential support zone from the middle of 2020 is being tested and could give way.

The trading volume is heavy and the OBV line is pointed down. The 12-week price momentum study has not slowed down. The only potential bright spot is that the two most recent candles have small real bodies. The real body is the distance from the open to the close and a small real body suggests that bulls and bears are getting more in balance.

In this daily Point and Figure chart of PYPL, below, we can see that prices reached and exceeded a downside price target. 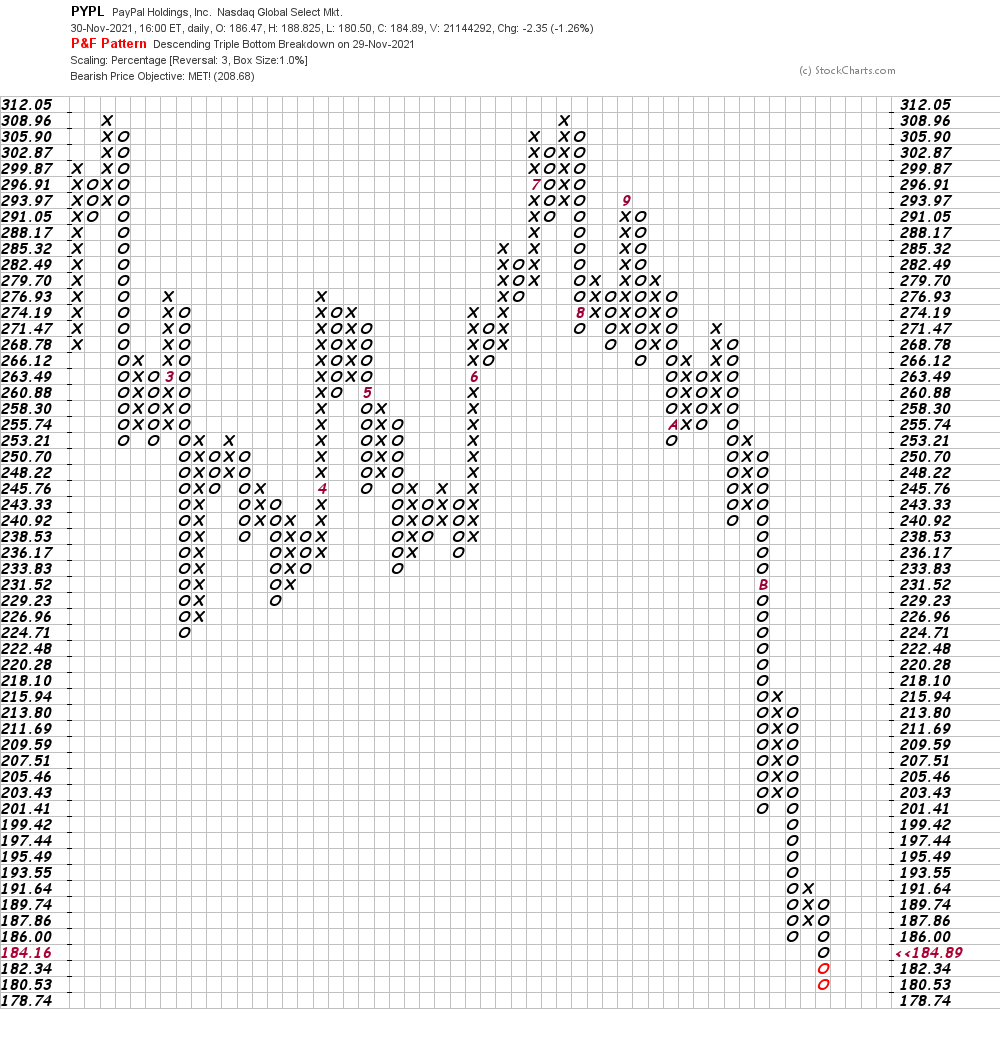 In this weekly Point and Figure chart of PYPL, below, we used a five box reversal filter. Here the software is projecting a possible target in the $156 area.

Bottom line strategy: PYPL has been "trashed" pretty good so some bargain hunters and buy-the-dip players may find PYPL temporarily attractive. A bounce is always possible but that is not my style of trading. Avoid the long side until a new base develops.

Get an email alert each time I write an article for Real Money. Click the "+Follow" next to my byline to this article.
TAGS: Earnings | Investing | Stocks | Technical Analysis | Trading | Financial Services | Software & Services | E-Commerce | Mad Money | Executive Interview