In his final "Executive Decision" segment of Wednesday night's Mad Money program, Jim Cramer sat down with Mark Schneider, CEO of Nestle S.A.  (NSRGY) , the packaged foods maker with shares that have risen 25% this calendar year.

Schneider said consumers today expect products that meet their changing needs. That means innovation is vital to success, which is why Nestle is always innovating to meet changing tastes. One of those changing tastes are meat alternatives, something investors cheered with last week's IPO of Beyond Meat (BYND) . Schneider added that Nestle is already offering similar products in Europe and will be expanding in the future.

Schneider also talked about Nestle's partnership with Starbucks (SBUX) . The deal was announced last fall but Nestle already has 24 products in stores. Do the charts reflect the positive fundamentals? Let's check.

In this daily bar chart of NSRGY, below, we can see an uptrend the past 12 months punctuated with a few shallow corrections. NSRGY is trading above the rising 50-day simple moving average line and is nicely above the rising 200-day line after tests of this trend indicator in October and late December.

The daily On-Balance-Volume (OBV) line has shown a steady rise the past year telling us that buyers of NSRGY have been more aggressive.

The Moving Average Convergence Divergence (MACD) oscillator has been above the zero line since the middle of January and looks poised for a fresh outright go long signal.

In this weekly bar chart of NSRGY, below, we can that staying with the uptrend has been hard with a deep correction in late 2016 and another one in the first half of 2018. A recent breakout over $88 has made the chart look more bullish. Prices are above the rising 40-week moving average line.

The weekly OBV line shows a generally positive trend since early 2017 and the MACD oscillator is bullish but narrowing towards a possible crossover take profits signal in the weeks ahead.

In this Point and Figure chart of NSRGY, below, we can see a key upside breakout at $84.75 and a potential longer-term price target of over $135. Impressive. 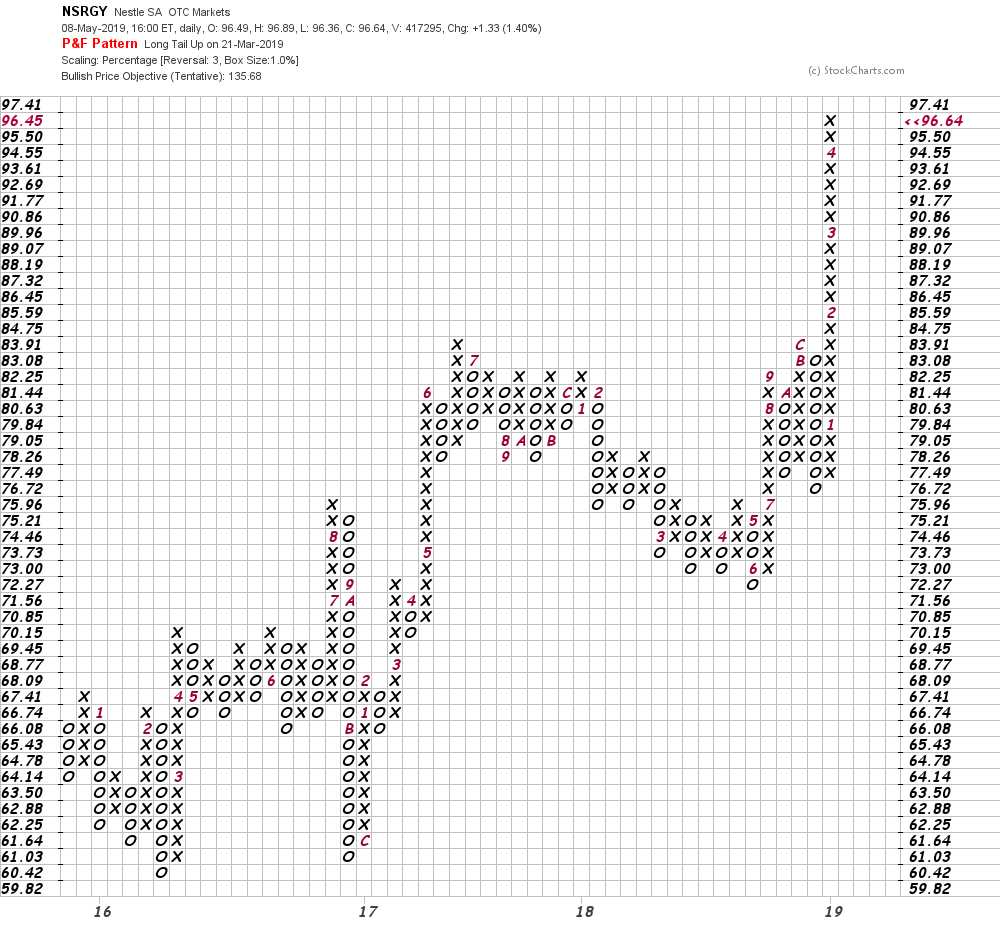 Bottom line strategy: NSRGY looks bullish unless prices break down below the 50-day moving average line and the April low around $93. $100 and then the $135 area are the upside price targets. Risk a close below $93 on existing longs and new longs.

Get an email alert each time I write an article for Real Money. Click the "+Follow" next to my byline to this article.
TAGS: Investing | Markets | Stocks | Technical Analysis | Trading | Food & Drink | Retail | Global Equity

2 of My Core Holdings Are on My Radar

While breadth is very good Wednesday, it isn't flowing into the speculative names.

Cisco Reports Wednesday, Is There a Trade Here?

Not much is expected when CSCO reports fiscal Q4 earnings. Here's how I'm playing it.

Silver and Gold Should Be Hedges Against Uncertainty, Not an Investment

It's understandable why precious metals are in vogue in our Covid-19 world, but remember that their prices can turn on a dime.

Go Long Nike as it Has Broken Out on the Upside

The charts show a buy signal, and now is a good time to get into NKE.