Darrell explained that after losing sales to supply issues last year, Logitech is now making up lost ground and is gaining market share in webcams and other categories. He said Logitech isn't just for hardcore gamers either. The company has many products that can be enjoyed by everyone, from the casual gamer to the new work-from-home labor force.

Darrell said that more consumers are making videos for YouTube, TikTok and streaming platforms. There are a lot of things you need to make a great video, that's why Logitech has everything from webcams to microphones to lighting and editing software.

As for the enterprise, Darrell noted that only 10% of all meeting rooms are currently video enabled, which leaves plenty of growth ahead as at least a portion of the workforce returns to the office.

In our October 27 review of the charts of LOGI we remained bearish, writing "No change in our strategy - continue to avoid the long side of LOGI as further declines are possible."

In this updated daily bar chart of LOGI, below, we can see that prices were cut in half from June to January. A classic percentage retracement. LOGI is trading below the negatively sloped 50-day and 200-day moving averages. A test of the 50-day average line is likely today as prices rebound after the latest earnings figures.

The On-Balance-Volume (OBV) line has been weak since June but it did not make a new low recently when prices hit a new low. This is a very small bullish divergence. The Moving Average Convergence Divergence (MACD) oscillator briefly moved above the zero line in late December and early January.

In this weekly Japanese candlestick chart of LOGI, below, we can see a still bearish picture. Prices are in a decline below the negatively sloped 40-week moving average line. The weekly OBV line has been steady the past two months and may mean that the selling pressure has ended.

The MACD oscillator is trying to bottom. The yet to be completed candle pattern for this week could show us a nice lower shadow as traders are so far rejecting the lows.

In this daily Point and Figure chart of LOGI, below, we can see that prices reached a downside price target of $72. 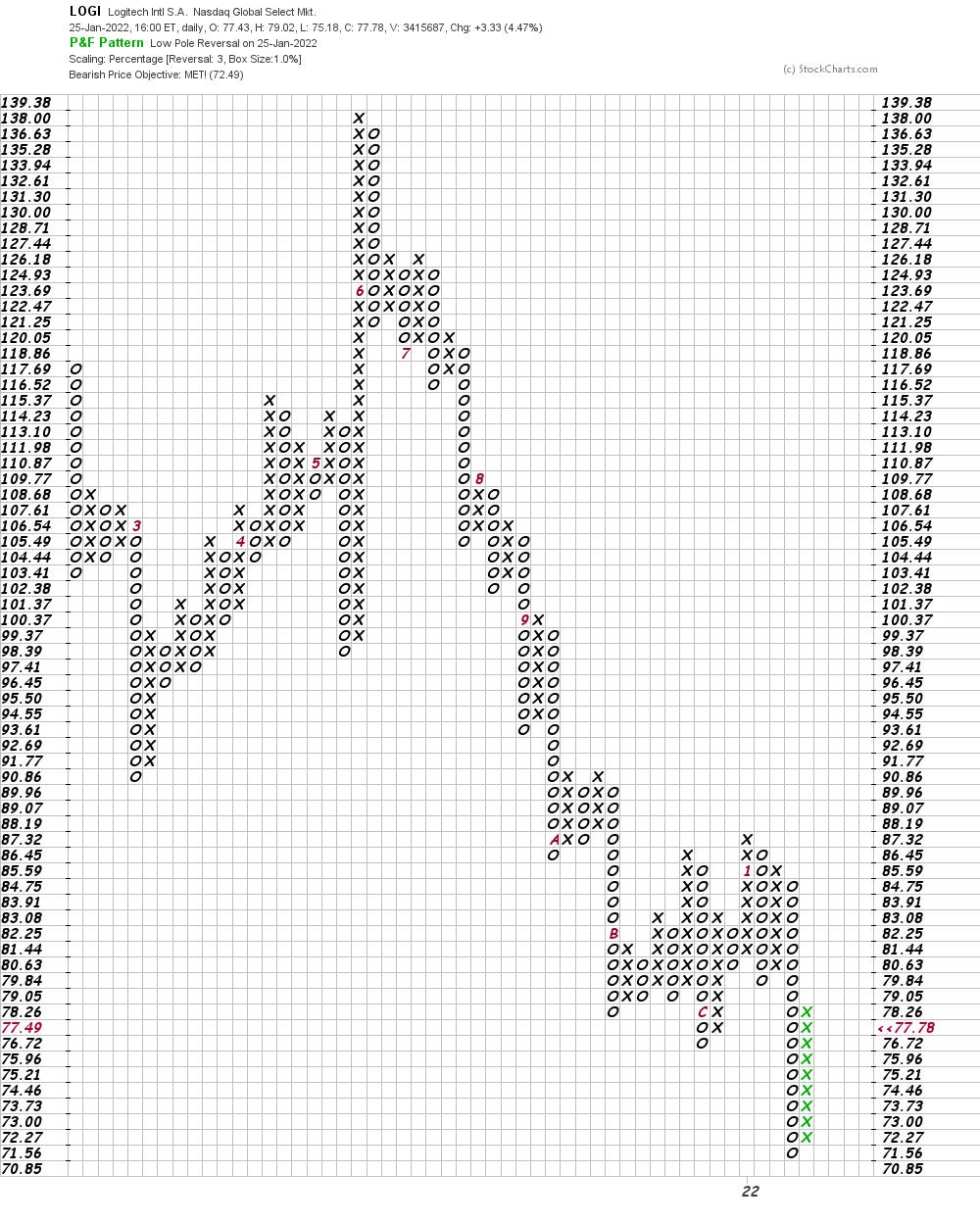 In this weekly Point and Figure chart of LOGI, below, we can see that the software is projecting a potential target in the $56 area. A trade at $88.19 may be needed to improve the picture.

Bottom line strategy: This is an interesting technical juncture, in my opinion. Prices have made a 50% correction and many longer-term investors are attracted to that signal. Prices are bouncing but we have no pattern of longer-term accumulation (buying) to declare that a bottom is in place. A low is probably in place. Traders could put LOGI on their market-minder and let's see how things develop.