Applied Materials (AMAT)  were trading lower Friday as traders react to an earnings miss and fundamental analysts cut their price targets for this semiconductor maker. Let's check out the charts and indicators.

In this daily bar chart of AMAT, below, that prices made a quick downside reversal in January and continued lower into May. Prices bounced for a few days but now we see a retest of the May low underway. AMAT is trading below the negatively sloped 50-day moving average line. The slower-to-react 200-day line also has a negative slope.

Trading volume has been heavy since January but has actually declined since the middle of January. Increased trading volume into May would be the pattern we prefer to see.

The daily On-Balance-Volume (OBV) line has declined from December. The Moving Average Convergence Divergence (MACD) oscillator is trying to turn higher for a cover shorts buy signal but it is struggling.

In this weekly Japanese candlestick chart of AMAT, below, we see a mixed picture. Prices are in a downtrend as they trade below the declining 40-week moving average line. I can see a recent lower shadow but I also see a number of upper shadows. AMAT will take the path of least resistance.
The weekly OBV line is pointed down and the MACD oscillator is bearish.

In this daily Point and Figure chart of AMAT, below, we can see a potential downside price target of $92. 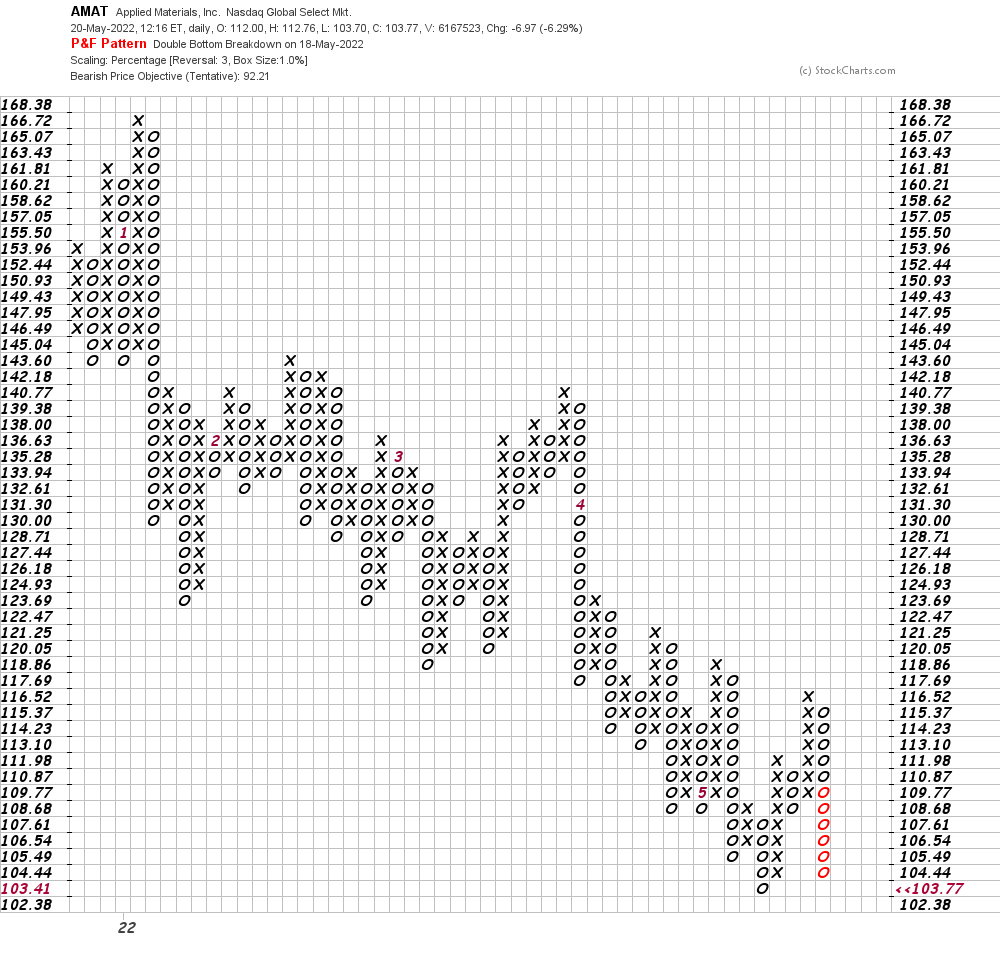 In this second Point and Figure chart of AMAT, below, we used weekly price data. Here the software projects the $76 area.

Bottom line strategy: Unfortunately it looks like the decline in the price of AMAT is not over. Avoid the long side until a bottom pattern develops.

(AMAT is a holding in the Action Alerts PLUS member club. Want to be alerted before AAP buys or sells this stock? Learn more now.)

Get an email alert each time I write an article for Real Money. Click the "+Follow" next to my byline to this article.
TAGS: Earnings | Investing | Stocks | Technical Analysis | Trading | Semiconductors & Semiconductor Equipment | Analyst Actions