I knew better. Readers who follow me closely know that I have often put ServiceNow (NOW) in the various baskets that I have created for names that might do well as corporate America worked its way through this public health/financial crisis. Just got too cute. Never actually benefited from my own call. Such is life. Let's pop the hood and have a look anyhow. The firm reported first quarter earnings on Wednesday afternoon. On an adjusted basis, ServiceNow earned $1.05 a share. That beat expectations, and in a quarter such as this, sports growth of 56% over the same quarter last year. As for revenue generation, that line increased 34% year over year to end the quarter at $1.06 billion. Oh, yeah... that was a also a beat. As the economy ground to a halt.

CEO Bill McDermott, who took the top post at the firm after a lengthy and quiet successful run at SAP SE (SAP) , calls ServiceNow as the "Workflow Workhorse." ServiceNow, by the way, is really the first true "Cloud King" to report the quarter, and what we know is that working for many firms has become difficult, at times disjointed, and complicated to manage at best, demand for outside help, cloud-based outside help in particular has ramped higher.

The caveat? As firms seemed willing to spend on improving connectivity and customer service management ahead of a shutdown, is that growth sustainable? That's a good question. The firm acknowledges that the more significant headwinds for this firm related to the crisis created by the coronavirus likely occur in this current quarter as well as the next. That said, subscription-based revenue amounted to $995 million for the quarter reported. That's 34% growth, and this is also more than 95% of the firm's entire revenue pie. The rest comes from professional services. That much smaller segment grew just 6%.

There are several key, and mostly positive takeaways that investors can lean on looking over the material. The first quarter provided 37 separate transactions of more than $1 million in net new annual contract value just in Q1, and now totals 933 customers with an annual contract value of $1 million. This is growth of 30% in these types of sizable clients. Billings increased 29% to $1.1 billion. Free Cash Flow increased 30% to $408.6 million.

ServiceNow has ventured out into the future, even with the already mentioned headwinds, the firm see $1.01 billion in subscription driven revenue for the second quarter, and $4.17 billion to $4.19 billion for the full year. At the low end, that's 28% growth. McDermott? The CEO was quoted at MarketWatch discussing the eventuality of $10 billion in annual revenue as a realistic goal, not for this year, but eventually. I have told you before, this is not the firm to bet against. The problem is, or at least has been for me... timing a reentry point. 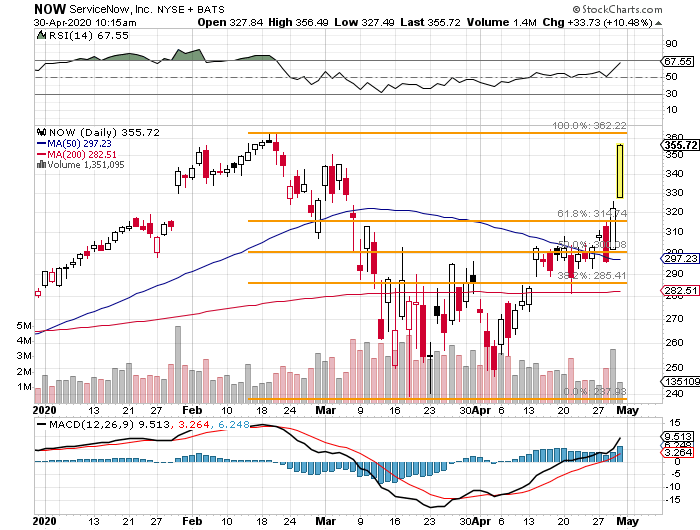 How interesting is this? I mean the shares were trading 10% higher today, after trading 9% higher on Wednesday. I hate to chase when I miss. Almost every professional manager I know feels the same way. So, a purchase at these levels, for me... is out of the question. This chart may offer opportunity. We see both a Fibonacci retracement model that after the February through March selloff, has seen the shares stop momentarily to pay at least a modicum of respect at, or close to the 38.2%, 50%, and 61.8% levels. The target now is plainly 100%.

What that does in my brain is identify the $362 level as a pivot, but probably not just yet. That's what I am anticipating, and I could be wrong. I most certainly was trying to buy this stock cheap. You should see the trail of discounted bids. Actually, no... no you shouldn't. However, what I see is a great big cup that needs (it does not need, I want to see) a handle. So, that's our (my) chance. After the past two sessions, one has to think that when we do get that next rotational days that takes aim at software types, that there will be traders in this name who cash in. When that happens, the pivot will shift from the left side of the cup ($362), to the right side of the cup, wherever that peak is.

I would think a trader who does take the plunge would need to sell related calls against the position just to reduce net basis. More than likely, I would rather (the options are somewhat illiquid) think about going out to a June 19th expiration or so, and getting short a bear put spread. The way, the trader sells the put with the higher strike price, opening up equity risk equal to that level, but contains that equity risk through the purchase of a similar number of puts at the lower strike price. Should the investor wind up with an equity stake at that time, net basis would be the strike price of the put sold less the net credit of the premiums received/paid.

Get an email alert each time I write an article for Real Money. Click the "+Follow" next to my byline to this article.
TAGS: Earnings | Economy | Investing | Stocks | Technical Analysis | Trading | Technology