By BRUCE KAMICH Sep 17, 2019 | 12:04 PM EDT
Stocks quotes in this article: TWLO, ADBE, NOW
Another stock that qualified under Jim Cramer's "Rule of 40" method (see stories on Twilio Inc.  ( TWLO) and Adobe Systems Inc. ( ADBE) ) is ServiceNow Inc. ( NOW) . Let's check out the charts on this pick, too.
In this daily bar chart of NOW, below, we can that prices bottomed in the October-January time frame before gapping higher to start a rally to a July high. Since the middle of July prices have declined to break the 50-day moving average line and turn its slope negative. The rising 200-day moving average line is just a few dollars below the market and could be tested or broke in the near-term. The On-Balance-Volume (OBV) line topped in June/July and its decline since signals that sellers of NOW have been more aggressive. The Moving Average Convergence Divergence (MACD) oscillator is in a bearish mode below the zero-line.

In this weekly bar chart of NOW, below, we can see that prices had performed strongly the past three years, but a July peak can be seen. Prices are testing the rising 40-week moving average line. The weekly OBV line shows a peak last August, and it has been bearishly diverging from the price action the past year. The MACD oscillator crossed to the downside in July for a take-profits, sell signal.

In this Point and Figure chart of NOW, below, we can see a distribution pattern and potential downside price target of $223. A trade at $276.19 would likely turn the chart bullish. 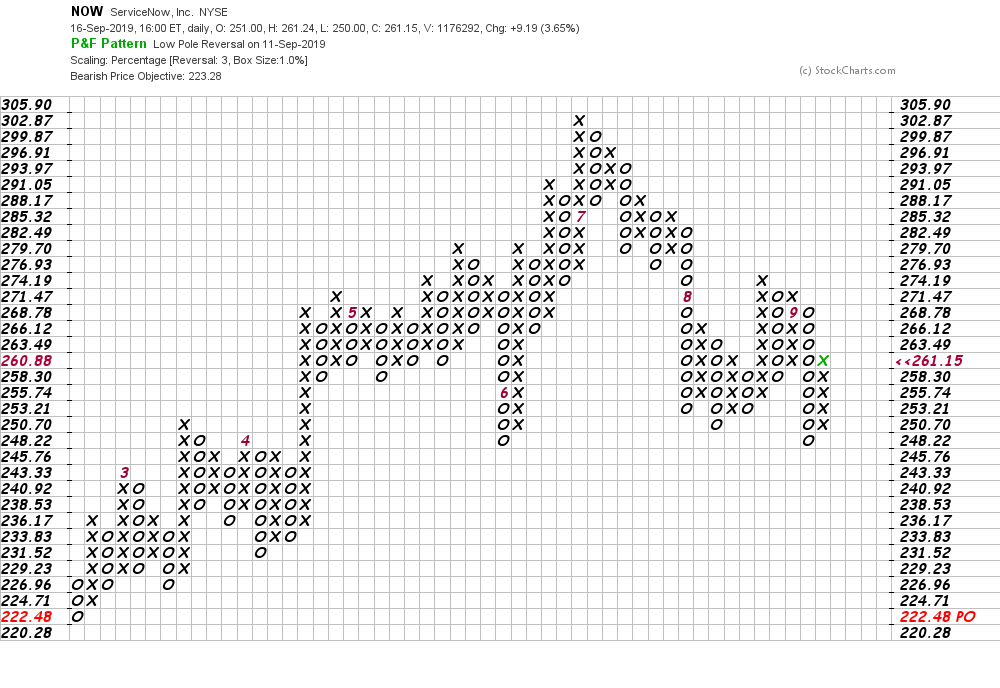 Bottom line strategy: Similar to the charts of TWLO and ADBE, NOW looks like it can weaken further. Defer making new commitments.
Get an email alert each time I write an article for Real Money. Click the "+Follow" next to my byline to this article.
TAGS: Investing | Technical Analysis | Software & Services | Technology | Mad Money