I'm sorry to have taken so long

It must have been a (beach) while I was gone

All this time you put up a fear

For a hundred thousand years

Had to chuckle, just a little. Not because I had been adding to tech stocks on weakness at some point of the day every day for a number of days now. If you read me regularly, you all knew that, and you all know that this has long been my modus operandi. We know that the day will come when this method fails, and we all know that it would be foolhardy to have been afraid to take advantage of buying these dips over a very positive decade plus or so just because every once in a while you do get caught in a bad spot. That is expected, and it is part of the cost of doing business. We can always go back to working for someone else if we have to.

The trick, in my opinion is to remain well balanced, to lean into a direction but not completely sell out. We, who are old and boring, refer to this posture in our portfolio allocation as being well diversified, also as well as being strategically hedged. The cool kids now call using one's head as a bar-bell approach... as if somehow, "they" invented the idea of being exposed to both "growth" and "value" and until they came along, we all just had no idea. Oh, I chuckle at that too, btw.

I chuckle not because there is any kind of vindication. A 3.7% rise for the Nasdaq Composite is wonderful. A 4% spike for the Nasdaq 100 is even better, and a 6.1% run for the Philadelphia Semiconductor Index simply beats all. One day does not make victory. There was a time when Hannibal did defeat Scipio Africanus regularly, using tactics that are still taught more than two thousand years later... until he didn't. Does one day of pure algorithmic joy mean that these kinds of stocks are now out of their correction? Of course not. No more than they were in a "correction" one day earlier as called by the entire financial media. Foolish mortals.

I don't know how to be any clearer on this. The statistical definitions used by the media to call a textbook "correction" or "bear market" of -10% or -20% from an annual or all-time high is ridiculous in this electronic age. These "faux" definitions were created at a time when stocks traded in Spanish pieces of eight, not sub-pennies, traders had three minutes to execute "held" orders, not microseconds, and no bid nor offer was considered valid unless it was audibly exposed to the centralized auction by someone easily identifiable by both firm and badge number. (Slightly more transparent? No kidding.)

A market can move sideways for a year. Forget about dropping 20%. If you don't make money for a year, you are very much in a bear market. Sensationalism is what sells in 2021. That, I guess, is something that we'll just have to live with. I don't see the ball rolling back in the other direction. Do you, Sisyphus? Perhaps it's a pendulum. Opinion, Edgar?

God of the Skies and War

My best bet is that most readers probably don't know that Tuesday is named after the pagan (barbarian) god Tiu (Germanic), or Tyr (Norse) whose "devine jurisdiction" covered both the sky and combat. As legend has it, Tyr gained his elevated status as an elite among the gods by losing his hand in defense of Odin to a wolf that had been prophesied to kill the king of the gods. Hence, a millennium and some change later, the modern calendar honors the one-handed pagan god with a day every week, but does not even know it.

Tuesday of this week was not exactly one handed, but close enough to it. Though seven of 11 Sector Select SPDR ETFs shaded green for the day, really two stood out... Consumer Discretionaries (XLY)  , +3.8% really thanks to Tesla (TSLA) which almost ran 20%. Incredible. The other standout sector was obviously technology (XLK) , +3.4%, broadly supported by software, hardware, semiconductors and even renewable energy equipment in ascending order.

The "one handed" victory was indeed to be claimed by the large cap Nasdaq indices, as they had suffered the most severe beatings year to date. Easily outperformed for the day, the S&P 500 still turned in a rather impressive increase of 1.4%, largely on the backs of some of the very same names that carried the day up at Times Square. It does need to be pointed out that the S&P 500 retook both the 21 day EMA and 50 day SMA for that index and held those gains. Both the Nasdaq Composite and Nasdaq 100 remain dangling out in the middle of a technical wasteland. I'll show you in just a minute. The Dow Industrials had made a nice run earlier in the session but gave it all back over the final 90 minutes.

While Apple (AAPL) and Intel (INTC) did enough to keep the Dow's head above water (just barely) the market turned on Disney (DIS) one day after that name had led the index. It appears that despite the fact that Disney Plus has picked up the streaming service's 100 millionth subscriber, and despite the fact that ESPN appears to be very close to reaching a long term deal with the National Hockey League, that the grand re-opening of Disneyland in Anaheim, California may be pushed back from the optimistic date of April 1 toward the end of April.

That moving date is seen by Mr. and Mrs. (Ms.) America as a proxy for the re-opening of the economy. Once "things" start to normalize, nobody with an ounce of street smarts is going to travel abroad, but you might just travel domestically. My dilemma is much simpler. What to do on nights when baseball competes against hockey. The sport I loved most versus the sport I played best. First world problems. I selfishly just hope we Hall of Famer Jim Cramer on the tube soon enough.

Breadth for the day, was solid depending on where one stood. At the New York Stock Exchange, winners beat losers, and advancing volume beat declining volume by moderate margins, but... and I hate to say it... aggregate trading volume decreased day over day. That does not count for much. Now, uptown... the action was far more convincing. At the Market Site, winners beat losers 3 to 1, while advancing volume simply obliterated declining volume (almost 8 to 1) on increased aggregate trading volume. The pros bought tech stocks on Friday and Tuesday, while many of them sat on their hands on Monday.

The real deal on Tuesday was demand for Treasury securities. While the ten year note was busy rallying, which pushed it's yield down to 1.54% (I see it at 1.557% this morning.), remember that the US Treasury sold $58 billion worth of three year paper on Tuesday afternoon, and that auction is being perceived as strong.

It is true that for this auction bid to cover ran up close to 2.7 from 2.3 for the same auction last month which was obviously at a higher price. High yield for the auction printed at 0.355% up from 0.196% in February. What I found less than thrilling was the decrease in foreign participation. Indirect bidders took down $27.6 billion of the $58 billion offered for a rough 47.6%. This is down from the 52.6% allocation at that higher price one month ago. I'd like to see 60%. Readers will recall that there was no upward movement in valuation for the rest of the planet's reserve currencies versus the US dollar ahead of that auction. This is not over. Treasury brings $38B worth of ten year debt to market this afternoon.

What The World Needs Now?

Love? Sweet love? Sure, but we'd be happy to get a "follow-through" day for the Nasdaq large cap indices. That is how we'll know if we are, or are not in correction, gang. 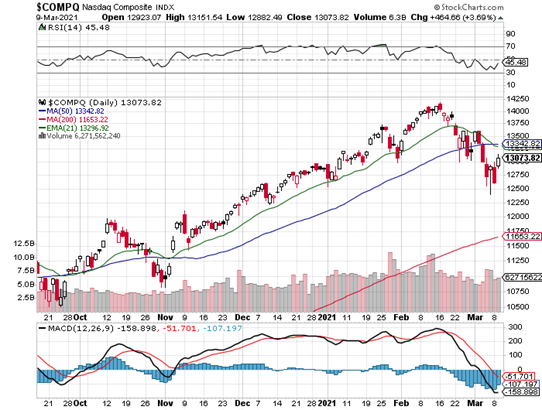 As readers will quickly see, Nasdaq relative strength remains sub-optimal. while the daily MACD still looks like Frankenstein's monster. The danger is exacerbated as the index even if it rallies back toward the "mini-death cross" area created around the intersection of the 21 day EMA and the 50 day SMA. That spot could very well form algorithmic resistance. In addition, there could be a gravitational pull toward that 200 day SMA should we see a couple of lousy Treasury auctions today (10 Year) and tomorrow (30 Year). Oh, and did I mention we'll get February data on consumer inflation this morning? Yeah, that's a big deal.

This is our deal. We don't need immediate follow through for Tuesday's rally to stay intact. Monday's low is more important technically than most of you probably know. Even if the Nasdaq Composite sells off from here, if it holds that low, through the week's end... then we are still in this ballgame. Should the Nasdaq Composite create a new low for the week at any point from here... then all of your favorite financial journalists were right, we will have to admit to being in correction.

How will we know the "follow-through" day when we see it? Oh, you'll know. It will look like Tuesday. Higher prices on higher volume with a short squeeze on top. Rock and roll.

(Apple and Disney are holdings in Jim Cramer's Action Alerts PLUS member club. Want to be alerted before Jim Cramer buys or sells these stocks? Learn more now.)

Get an email alert each time I write an article for Real Money. Click the "+Follow" next to my byline to this article.
TAGS: Economic Data | Economy | Indexes | Investing | Markets | Stocks | Technical Analysis | Trading | Treasury Bonds