In his second "Executive Decision" segment during Tuesday night's Mad Money program, Jim Cramer sat down with Jeff Green, president and CEO of The Trade Desk (TTD) , the digital advertising platform provider that saw its shares plunge 14% last week after the company gave conservative guidance for the rest of 2019.

Green explained that despite last week's decline, Trade Desk shares are up over 1,000% in less than three years. He said that if you want to buy ads on Google, YouTube or Facebook, you go to Google (GOOGL) or Facebook (FB) , but if you want to buy advertising on the rest of the Internet, you need Trade Desk. The company's platform uses data to help advertisers determine which are the best places to spend their marketing dollars.

Green added that there's always a balance between growth and profitability, and platforms like TTD can help companies find the ratio that works best for them. Turning to the topic of content, Green said that there's more content available today than ever before, but most consumers can't afford another subscription service, which is why 95% of shows remain advertising supported. Let's check out the charts and indicators to round out our analysis.

In this daily bar chart of TTD, below, we can a number of bearish clues. TTD has declined sharply this month. Prices broke below the flat 50-day moving average line and have broken nearby support in the $195-$180 area.

TTD is still above the rising 200-day line but a retest of the next lower support area around $150 would be another potential sell signal.

The daily On-Balance-Volume (OBV) line rose along with prices until early May when it turned lower. Sellers of TTD became more aggressive this month and shift could be the start of a bigger decline.

The Moving Average Convergence Divergence (MACD) oscillator shows a lower high from March to May while prices made a higher high. This is a bearish divergence and a sign of weakness. The MACD is poised to cross below the zero line now for an outright sell signal.

In this weekly bar chart of TTD, below, we can see a very impressive rally from late 2017 in the $30s. Prices are still above the rising 40-week moving average line but a weekly close below $155 would break it.

The weekly OBV line shows weakness the past three months and the MACD oscillator has crossed to the downside for a take profits sell signal.

In this Point and Figure chart of TTD, below, we can see a bullish upside price target but there looks like plenty of overhead resistance to blunt a rally attempt. 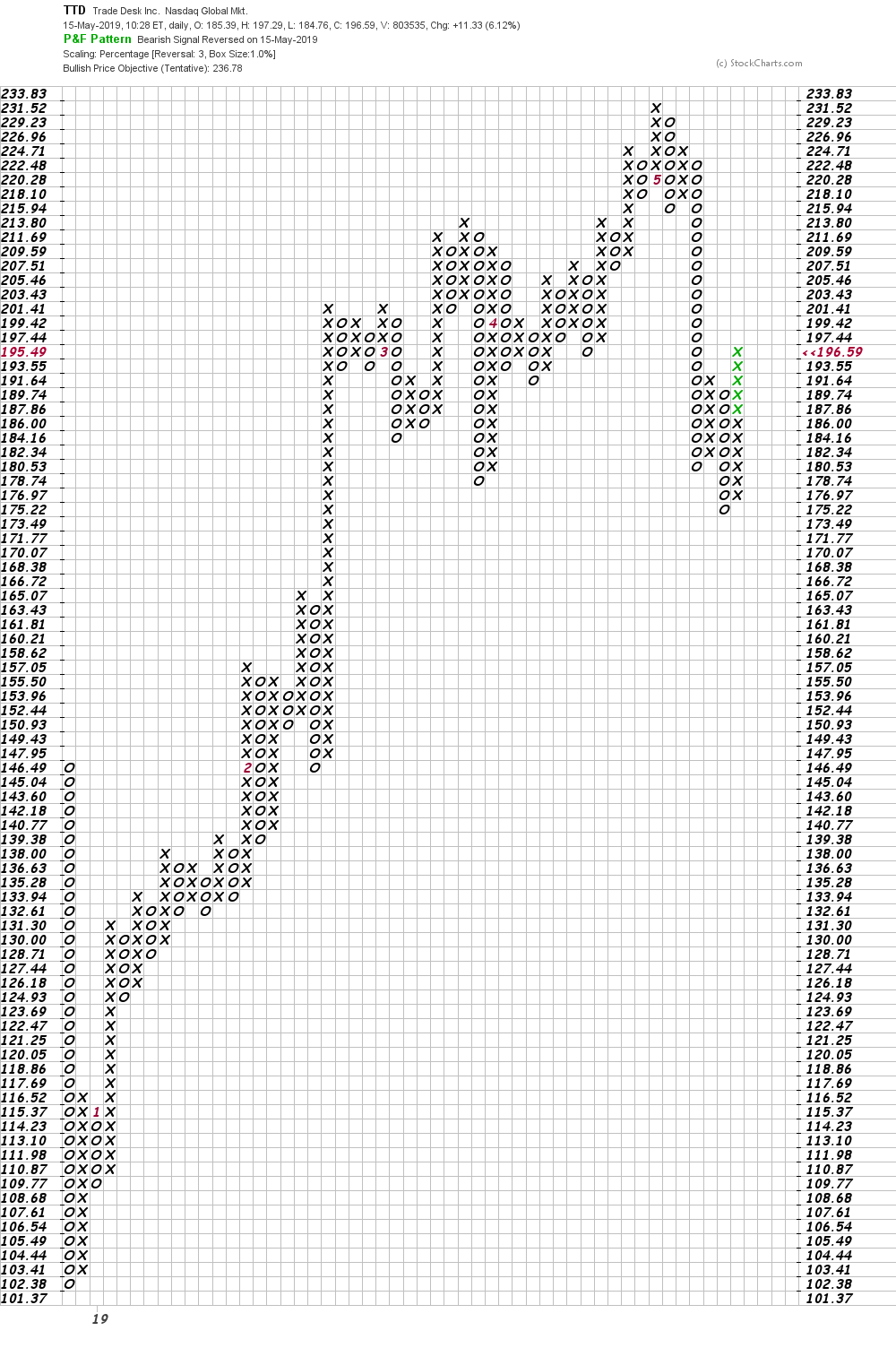 Bottom line strategy: With a number of sell signals on the daily and weekly charts of TTD, traders and investors should look at a more defensive posture.

(Alphabet and Facebook are holdings in Jim Cramer's Action Alerts PLUS member club. Want to be alerted before Jim Cramer buys or sells GOOGL or FB? Learn more now.)

Get an email alert each time I write an article for Real Money. Click the "+Follow" next to my byline to this article.
TAGS: Investing | Stocks | Technical Analysis | Advertising | E-Commerce