Shares of Baxter International Inc. (BAX)  plunged 10% last week after the company announced it is opening an investigation into accounting irregularities. Are shares are a buy, or should investors jump ship?

Jim Cramer on his "Mad Money" show said his hard-and-fast rule is that accounting issues always mean sell, but if anyone deserves the benefit of the doubt, it's the tried-and-true folks at Baxter. According to the announcement, the issue stems from how the company accounted for foreign exchange rates internally. The discrepancy, if true, could be worth seven cents a share to Baxter's earnings. With shares already off 10%, Cramer said the worst case is already baked into the share price.

But even with Baxter's earnings momentum, Cramer said he has to stick with his rule and sell. No amount of good news can offset the fear that accounting issues can cause, he said, so until Baxter sounds the all-clear, investors need to stay away. Let's check in with the charts and indicators to see if there is more risk ahead.

In this daily bar chart of BAX, below, we can see that prices and the indicators are all aligned to the downside. Prices have continued to weaken after the big bearish gap to the downside and that is a sign that the lower price is still not attractive enough for investors.

In this weekly bar chart of BAX, below, the gap disappears, but the chart is still bearish with the price of BAX below the cresting 40-week moving average line. Trading volume increased in the direction of the trend which is now down. The weekly OBV line has started to turn lower and the MACD oscillator has crossed to the downside for a take-profits sell signal.

In this Point and Figure chart of BAX, below, we can see that the software has counted the distribution pattern and has generated a potential downside price target of $63. 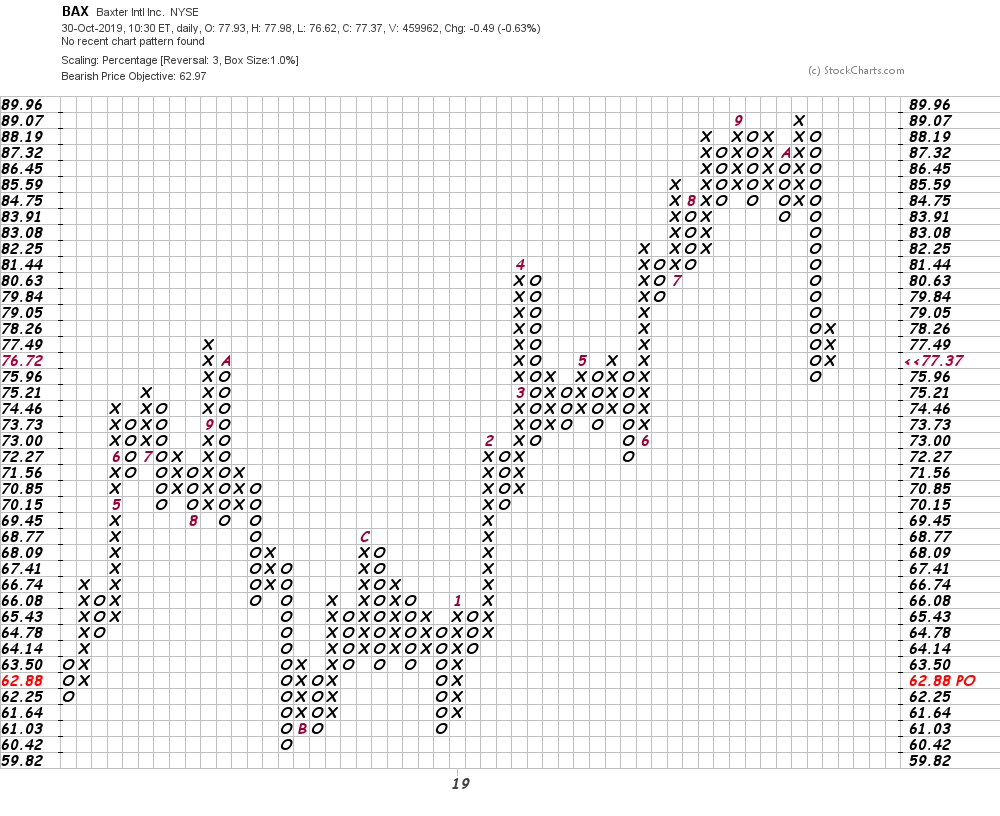 Bottom line strategy: With all three charts (above) of BAX bearish, and with a potential $63 price target, I see no reason to be long on BAX. Time to jump ship if you have not already done so.

Get an email alert each time I write an article for Real Money. Click the "+Follow" next to my byline to this article.
TAGS: Investing | Technical Analysis | Healthcare | Pharmaceuticals | Technology | Mad Money