Friedman said many people still think of the old RH and don't see them for the aspirational brand they've become today. "Everyone will eventually catch up," he said.

Some of those unordinary paths was the company's announcement that it looks to build entire homes in Aspen, CO. Friedman quipped that they haven't even begun to design these homes yet, but they've already received offers from interested buyers sight unseen.

Similar bewilderment has become the company's "guest house" project in New York, which Friedman insisted is not a hotel, but a whole new way to escape our ever-connected world.

Let's check out the charts of RH again.

We looked at RH back on September 16 when the stock was upgraded by our quantitative service. We wrote: "It looks like RH is going still higher in the weeks and months ahead. The question is not where to buy it, but rather what to risk considering the upside gap earlier this month. I don't want to risk below the price gap so I would suggest a stop on a close below $340." As things turned out, RH filled the gap and we would have been stopped out with a loss. Prices did not rally again until November.

In this updated daily bar chart of RH, below, we see that prices have moved higher the past 12 months but the technical indicators we favor have not confirmed the move to the upside. RH is now above the 50-day moving average line but it has been testing that line over the past two months. The slower-to-react 200-day moving average line is below the market and intersects around $390. The trade volume has not expanded during the advance.

The On-Balance-Volume (OBV) line has actually declined from September suggesting that sellers have been more aggressive on the rise. The Moving Average Convergence Divergence (MACD) oscillator shows lower highs from June but the uptrend keeps going.

In this weekly bar chart of RH, below, we can see a positive picture. Prices are in a longer-term uptrend above the rising 40-week moving average line. The weekly OBV line shows a positive trend from March which is opposite of the daily OBV line. The MACD oscillator is above the zero line and turning upwards towards a new buy signal (perhaps).

In this daily Point and Figure chart of RH, below, we can see that prices have reached a $529 price target. Prices could certainly trade higher but this gives us pause. 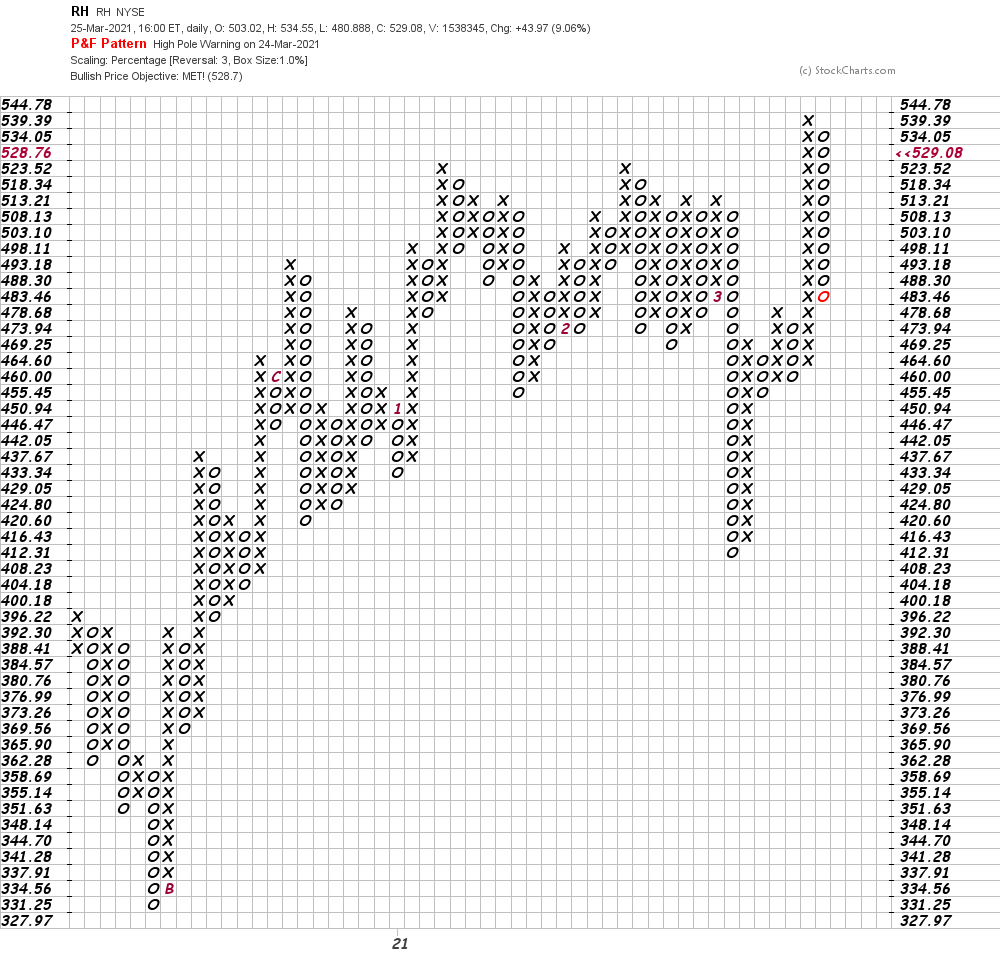 In this weekly Point and Figure chart of RH, below, we see that the software is projecting a tentative price target in the $797 area. Let's round up to $800.

Bottom line strategy: Whenever I look at a chart I first try to decide where to risk. At what price point will the chart in my opinion look weak or bearish. Looking at RH today I would suggest a $450 sell stop. I would also suggest buying RH on strength rather than weakness.

Get an email alert each time I write an article for Real Money. Click the "+Follow" next to my byline to this article.
TAGS: Earnings | Investing | Stocks | Technical Analysis | Trading | Household Products | Mad Money | Executive Interview