Slumbering giant awakened? Actually, Schlumberger (SLB) , a former Sarge-fave from an era thought long gone, hasn't really been slumbering. On Thursday afternoon, the shares closed at $40.65, up 30% year to date. That said, Thursday's close was also down 12.2% from SLB's March high.

Schlumberger released the firm's first quarter financial results on Friday morning. The firm posted adjusted EPS of $0.34 (GAAP EPS: $0.36) on revenue generation of $5.96B. Both top and bottom line results narrowly beat Wall Street, while the earrings accounted for annual growth of 61.9% and the revenue added up to growth of 14.2%.

In addition, Schlumberger's Board of Directors approved an (40%) increase in the quarterly cash dividend from $0.125 to $0.175 per share to start with the payment of July 14th, 2022 to shareholders of record on June 1, 2022. Now, before you get excited about the dividend, this only brings the forward yield up to 1.72%. That said, this is a move in the right direction.

Readers will note that three out of the four segments are generating substantially greater sales and producing notably increased operating income than what they were doing one year ago. One segment, the second largest revenue producer, but by far, the weakest driver of operating income does leave plenty of room for improvement.

Schlumberger CEO Olivier Le Peuch led off the press release with some lengthy commentary. Some excerpts taken from that commentary follow....

"The confluence of elevated commodity prices, demand-led activity growth, and energy security are resulting in one of the strongest outlooks for the energy services industry in recent times - reinforcing the market fundamentals for a stronger and longer multiyear upcycle - absent a global economic setback."

"Moving forward, the outlook for the rest of the year - particularly in the second half - is shaping up very well with both the short- and long-cycle investments accelerating. Notably, a number of FIDs for long-cycle development projects have been approved, new contracts were awarded, offshore exploration drilling is resuming, and several customers have announced a significant step-up in their spending plans for this year and over the next few years."

"Consequently, it is our view that increased activity-both on land and offshore-higher technology adoption, and pricing momentum will drive simultaneous growth internationally and in North America. This will result in a sequential seasonal rebound in the second quarter followed by significant growth in the second half of the year, particularly in the international market."

"With this backdrop and despite the uncertainty linked to Russia, we believe the current market dynamics should allow us to maintain our full-year ambitions of year-on-year revenue growth in the mid-teens and adjusted EBITDA margins exiting the year at least 200 basis points higher than the fourth quarter of 2021. Our positive outlook extends further into 2023 and beyond as we anticipate successive years of market growth."

I know that this is a lengthy bit of commentary, and believe me, I shortened it for you. Read it a couple of times. I have reread it many times myself already. That's what confidence sounds/reads like. Le Peuch sounds like a leader who knows his ship has finally come in. Le Peuch also mentions the firm's continued attempt to deleverage the balance sheet, so let's go there.

Schlumberger ended the quarter with a net cash position of $2.649B, and current assets of $13.253B, which is up small from this time one year ago. Current liabilities have also grown small to $10.696B. This leaves the firm with a current ratio of 1.24, which is healthy. It means Schlumberger can pay its bills and service its debt. For now. Total assets add up to $41.967B, which compares well to total liabilities less equity of $26.328B. Now, herein lies the rub. Long-term debt is sizable... $13.163B. It's going to take a while to work that load a bit lower. In addition, Schlumberger includes entries for "goodwill" and "intangible assets" (yes, goodwill is an intangible asset) that combined, total $16.136B. Subtract that number from total assets, and we are left with $25.831B. That means that liabilities less equity outweighs assets less all intangibles. I don't love that. To the CEO's credit, he did mention the balance sheet as something of an area in need of improvement.

I bought some shares early this morning before I knew I was going to write this article, if that gives you a clue. Obviously, I am not in love with the balance sheet. At least in current terms, the balance sheet is not going to blow up today or tomorrow. I am profoundly impressed with Le Peuch's commentary and outlook. That's what got me back in SLB for the first time in a very long time. I have been in the energy space this year, mostly in land based exploration with a North American focus. I had missed the "oil services" boat, and had watched Halliburton (HAL) seriously outperform both Schlumberger and Baker Hughes (BKR) . My thinking is that SLB, though it brings more international exposure than HAL, has some catching up to do. 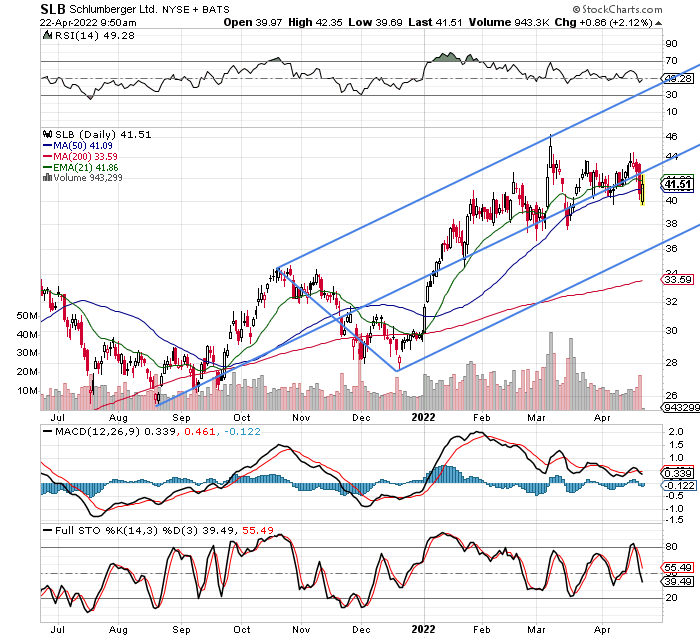 It's not every day, at least lately, that I get to dust off the old Andrews Pitchfork Model in these markets. Readers will see that this model goes back to last summer. The shares have lost and regained the central trend line several times over the last 60 days or so and are trying to regain that line now. This does not seem to be a thing. More importantly, SLB is struggling to hold on to its 50 day SMA ($41.09) and 21 day EMA ($41.86). The 21 day would get the swing crowd involved while holding the 50 day will keep portfolio managers on board.

My three main indicators are all pretty neutral. The stock is not trading at extremes and is trading in line with HAL and at a discount to BKR in terms of valuation.

Get an email alert each time I write an article for Real Money. Click the "+Follow" next to my byline to this article.
TAGS: Earnings | Investing | Stocks | Technical Analysis | Trading | Energy | Oil Equipment/Services