Ever play sports? When I first set foot on the trading floor of the New York Stock Exchange way back when, I was struck with awe. It was like setting foot on the playing field at a Major League Stadium. One of the first things I ever noticed, was that (back then) math was done in one's head, very quickly. Decisions were made on judgment, and a very high percentage of the people around me came from either military or athletic backgrounds. Some of us both.

All athletes prefer to leave the game of their passion on a high note. I played hockey as a youth through the age of 38. At my athletic peak, I was usually a pretty good player on usually losing teams. At age 38, I was a broken down defense-man playing with broken ribs who could not keep either shoulder in the socket without thinking about being very careful. I had been relegated to the second line. I did not care. That team won it's league championship. My fist chance to skate around the rink with a big trophy in 25 years. I retired from the game I loved on the spot. On a high note.

Some may not follow SAP (SAP) all that closely. Maybe they should. The firm pre-released Q3 earnings on Thursday evening that beat expectations on both the top and bottom lines. Growth in the cloud was excellent and long-time CEO Bill McDermott stepped down from his post after reiterating full year guidance. Under McDermott's leadership, the firm's market value has more than tripled. McDermott, who would have had to renew his contract for 2020, chose safe to leaving the game that he loves on a high note.

As for the earnings, this will be third consecutive quarter of bottom line growth on top line growth of 12.9%. This is the fastest pace of sales growth for this firm in a year and a half, as well as the fifth consecutive quarter of accelerating growth on this line. Now for some drama. The broad cloud based business experienced growth of 37% versus the legacy businesses of Software licensing and support that though still contributing the lion's share of revenue generation grew at just 4%. This transition has also resulted in margin expansion. Operating margin improved to 24.7% (IFRS) for the quarter from 20.7% one year ago on this strength.

McDermott's position will be split, as it was when he first assumed the mantle of overall leadership in 2010. The job will now belong to Jennifer Morgan, who has been serving as president of the firm's Cloud Business Group, and Christian Klein, 20 year veteran of the firm who had been serving as Chief Operating Officer. This succession had been planned out for about a year. There are no surprises here. 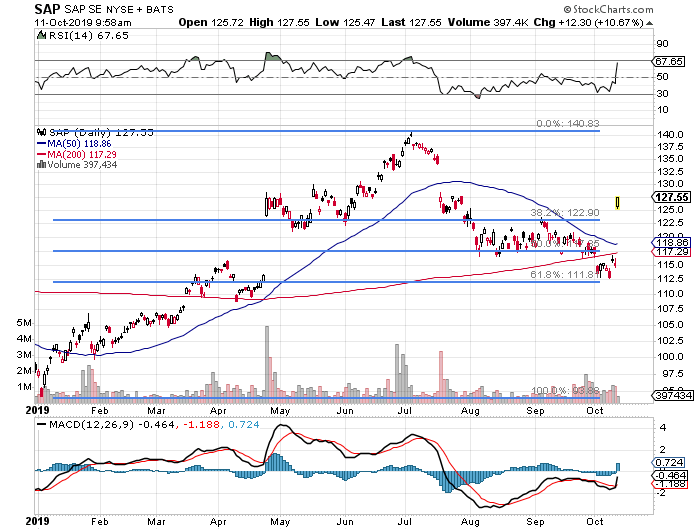 This morning's pop in the share price will cement the support found at the lows experienced earlier this month as a near perfect Fibonacci retracement of 61.8% tracing the 2019 lows through the 2019 highs. Perhaps the share price will also get an assist from the possibility that the stock's 50 day SMA will now likely pull away from the 200 day SMA, avoiding what was starting to look like a certain "death cross" as a near-term possibility.

I do not like to chase, though there is now at least a possibility that there could be an attempt made to fill the gap created by the selloff in July. A low probability/low reward trade that might be of interest due to minimal layout might be a long short-term strangle options strategy. How about this idea?