Cramer said he has liked this company for a long time and likes what it's doing now. That includes selling its $13 billion stake in Regeneron (REGN) and redeploying the capital for growth and working on a Covid-19 vaccine.

The company is working on two vaccines for Covid, Hudson said, adding that "we need to play our part...we know what our duty is."

Sanofi expects to enter Phase 3 testing in November or December and have a vaccine ready in early 2021. When that happens, it plans to produce a billion doses. That's not hyperbole, he added, as the company already produces a billion doses of various vaccines each year.

"We're doing it the right way to high standards and we're going to play a big part in helping get people back to normal," he said.

In this daily bar chart of SNY, below, we can see that prices made a small double top back in January and February before declining with the broad market losses in March. SNY rebounded and was making new highs for the year in June and July.

Prices have corrected down into early September to test the rising 200-day moving average line. Another test of the 200-day line seems likely in the short-run.

The On-Balance-Volume (OBV) line shows a slight decline from late July telling us there is a slight bias towards more aggressive selling.

The Moving Average Convergence Divergence (MACD) oscillator has been hugging the zero line the past two months which tells us that there is little power behind any rally attempts.

In this weekly bar chart of SNY, below, we can see a mostly positive picture over the last three years of activity. Prices are above the rising 40-week moving average line after a test of the line in late August.
The weekly OBV line shows good strength the last three years but it has become stalled since June of this year. The MACD oscillator is in a take profits sell mode.

In this daily Point and Figure chart of SNY, below, we can see two important clues. The software is reading the chart as accumulation (buying) and projects an upside price target in the $59 area. However, a trade at $49.03 or $48.54 is likely to weaken the chart and generate a downside price objective. 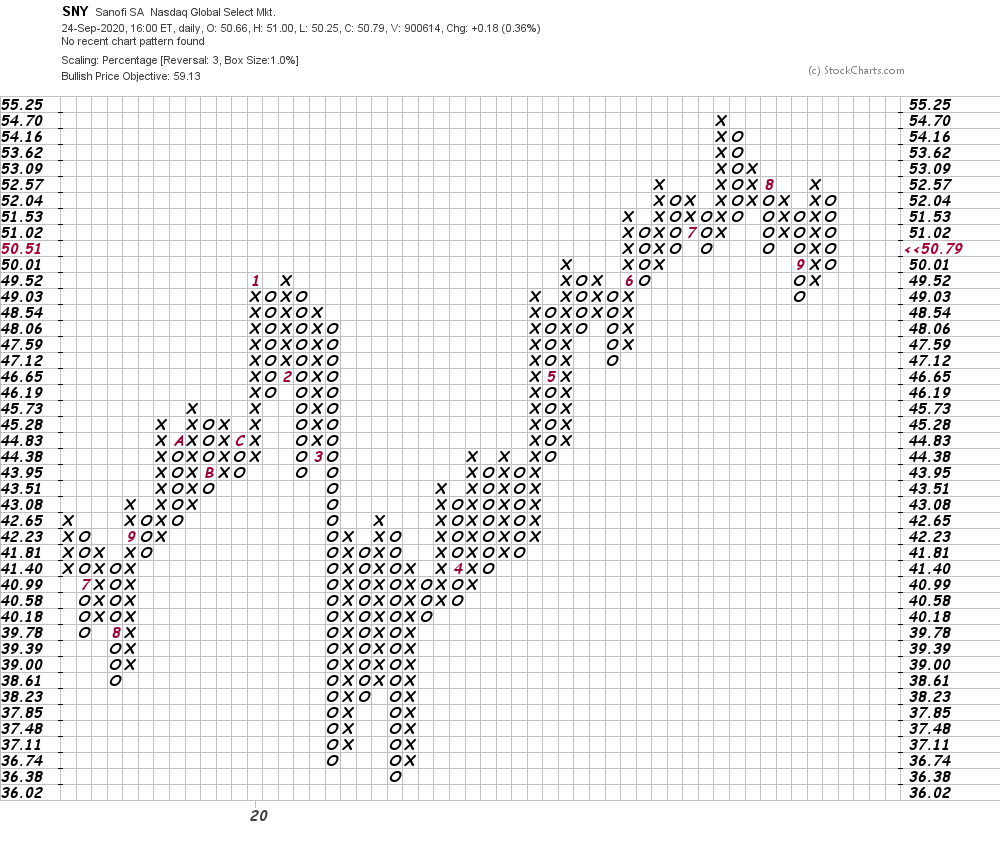 Bottom line strategy: I would anticipate further sideways price action for SNY. Buyers seem to be interested in the long side in the $50-$48 area but the OBV line is not showing signs of more aggressive buying. I would consider SNY a hold at this point in time.
Get an email alert each time I write an article for Real Money. Click the "+Follow" next to my byline to this article.
TAGS: Investing | Stocks | Technical Analysis | Trading | Pharmaceuticals | Mad Money | Executive Interview | Coronavirus

Jim Cramer: It's a Jailbreak and the Stocks Are Busting Out

This market is moving in so many areas that you have to marvel at how it's even possible -- even if the Russell Rebalancing could change all that on Friday.

It may be time to stand aside right now.

The cannabis sector is finally turning back up after a sharp correction that started in early February.

Commodity Correlations Could Work Against Stocks

Perhaps the most important intermarket relationship is the correlation between crude oil and the S&P.