A little less than two weeks ago, David Tepper's Appaloosa hedge fund disclosed that it had taken on a new position (200K shares) in Salesforce (CRM) . The stock bottomed in the mid-$150's twice during the second quarter, and once more in July. Wonder where Appaloosa initiated. Regardless, that's some good company to be in.

I have sold some Salesforce, and have bought some Salesforce this year, but I have never gone "flat", at least not this year anyway. Salesforce and Microsoft (MSFT) are the only two software stocks, or "cloud kings" that I have held some kind of perpetual long position in as the market has done what it has done. I am also, at this moment, long some ServiceNow (NOW) , but I get in and out of that name often. Salesforce, by the way, reports late today, after the closing bell.

Salesforce shareholders look forward to the firm releasing its fiscal second quarter results on Wednesday afternoon. For the firm's fiscal first quarter, Salesforce reported adjusted EPS of $0.98 (GAAP EPS: $0.03) on revenue of $7.41B. These numbers beat Wall Street's projections for both top and bottom line results, while the top line itself showed year over year growth of 24%, or 26% in constant currency. The lion's share of the EPS adjustment came from stock-based compensation expenses.

For this evening, a consensus of more than 35 analysts is for adjusted EPS of $1.03 on revenue of $7.7B. All eyeballs tonight will be on the Subscription and Support business. That business, which is by far, the firm's significant revenue generator. Subscription and Support posted revenue of $6.856B for Q1, up 23.8%. This is where the magic happens, so to speak. This is where clients looking to digitize data and shift operations to the cloud, go to get that done. The need for these services is here to stay.

That said, with the macro backdrop the way it is, and tech firm after tech firm announcing either reduced payrolls or hiring freezes, it does stand to reason that there is a risk associated with this quarter in particular, concerning corporate spending on IT. Secondarily, investors will also need to focus on the Professional Services and Other business. This unit only drove revenue of $555M back in the first quarter, but that was up a whopping 29.9%.

Cash from operations surged to $3.676B back in Q1, resulting in free cash flow for the quarter of $3.53 per share, which was almost double the prior quarter. This left a net cash position of $13.503B on the balance sheet, and current assets of $20.441B. Current liabilities came to $19.899B, including $1.002B in debt labeled as current. This puts the current ratio at 1.03, and while not exactly robust, that's kind of like squeaking by. Consider it a C+. 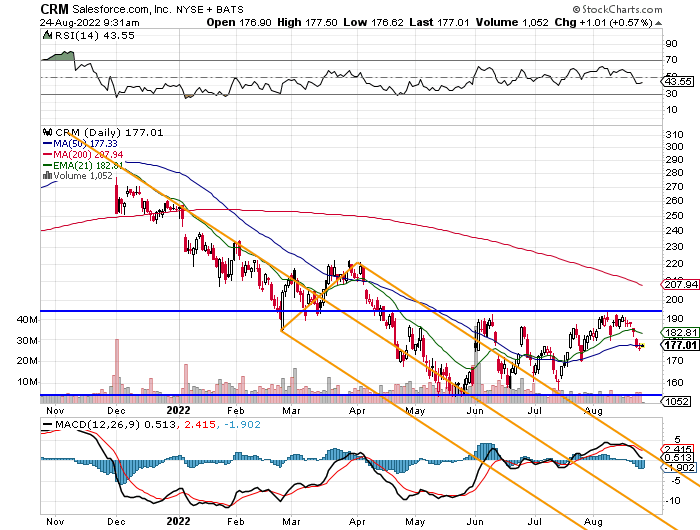 Stock's not inexpensive at 37 times forward looking earnings. That could be a reason to take a pass. I have chosen to overlook valuation for now. Salesforce comes into earnings with a neutral reading for Relative Strength, and a soft looking daily MACD. Readers will see that CRM broke out of a seven month downtrend in June and moved into a basing pattern that has now lasted almost five months. (There are about six weeks of overlap between the two patterns.)

The stock has recently surrendered its 21 day EMA, which caused the swing trading crowd to cut bait. Currently, CRM is engaged for several days now in a fight for its 50 day SMA. Lose that line, and you'll lose some portfolio managers. Again. Hold that line, and well, that will be up to the earnings, now won't it?

Best Case? Investor is called away at expiration for a net profit of 13.4%.

Worst Case? Investor ends up long 200 shares at a net basis still of $167.50, with CRM trading below that level.

(MSFT is a holding in the Action Alerts PLUS member club. Want to be alerted before AAP buys or sells these stocks? Learn more now.)