Two weeks ago, Salesforce (CRM) President and COO Bret Taylor appeared on CNBC. Taylor simply stated: "Work as we know it has changed forever." He then added "In this all-digital, work from anywhere world, your digital headquarters is more important than your physical headquarters." Taylor went on to explain how businesses relied upon tools such as Slack (acquired by Salesforce this past summer) in order to comply with workplace restrictions. Taylor believes that such tools will become even more important as flexible workplace environments become permanent at many businesses post-pandemic. Of course, this interview was done pre-Omicron, which could actually make what he said even more pertinent.

Salesforce absolutely crushes expectations for second quarter profitability while beating Wall Street's projections for revenue generation. Current remaining performance obligation printed at $18.7B, which was up 23% year over year, but GAAP operating margin landed at 5.2% (adjusted to 20.4%), while operating cash flow contracted 10% year over year.

That said, at that time, Salesforce increased revenue guidance as well as adjusted earnings guidance for both the third quarter and the full year. The firm had been aggressive. It had done what was needed to stay on the consistent trajectory of sales growth that it has seemingly always been on. Now, the focus had to be on integration, and the clientele.

Salesforce will post third quarter financial results tomorrow evening. A consensus of the 37 analysts that cover the name is for EPS of $0.92, with a high estimate of $0.98 and a low estimate of $0.90. Wall Street is also looking for $6.8B in revenue, which falls in between a high expectation of $6.9B and a low of $6.78B. These numbers, if accurate would be right on the firm's own earnings guidance, and slightly above the earnings guidance, after much of Wall Street had to increase their numbers in order to get in line with the company's outlook. These results would also be good for sales growth of 25.4%.

Last week, Brent Thill, the five star (TipRanks) analyst at Jefferies offered his opinion that Salesforce would beat expectations tomorrow night. Thill mentioned that according to his data, 83% of the firm's customers are seeing productivity in their pipelines, as there has been a healthy acceleration in the partner ecosystem fostered by the company. Thill, while increasing his price target to $360, spoke of the firm taking a breather on M&A, and focusing on integrating Slack, which probably supported margin.

In all, eight five star analysts (that I have found) have opined on Salesforce over the seven days going into earnings. What we have here is seven "buys or buy equivalents" and one "hold equivalent" The average target price of those eight individuals is $338.25, with a high of $360 three times (Brent Thill, Bradly Sills of Bank of America, and Keith Weiss of Morgan Stanley) and a low of $308. The low came from , whose "neutral" was the hold equivalent and even while he maintained his rating, he was increasing his target price from $280. 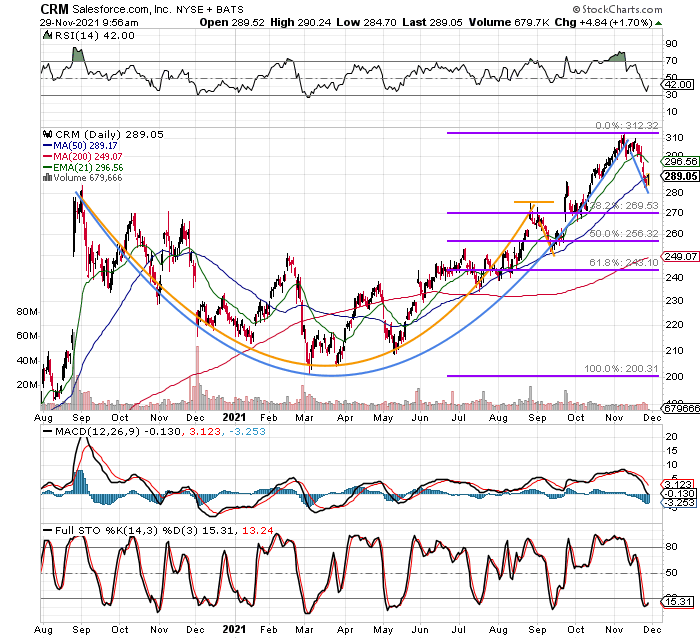 One... I like when a stock I own ( I am long CRM) sells off into earnings. Readers will see that three months ago, I drew an (earnings related) saucer with handle pattern that provided a pivot of $275. It worked like a charm. The stock traded as high as $311. Problem is that I don't see that yellow saucer with handle anymore. I see an even longer (blue) saucer with handle, that only since early November has started to build a handle. Readers should note that there is no tremendous difference between a cup and a saucer. In my opinion, if it's longer and kind of shallow, I call it a saucer. This pattern is not really that shallow, but it is now almost 16 months long.

Readers should also note that while Relative Strength remains rather neutral, that the daily MACD is weak, while the Full Stochastics Oscillator looks badly oversold as the shares struggle to hang on to their 50 day SMA at $288.

(Salesforce is a holding in the Action Alerts PLUS member club. Want to be alerted before AAP buys or sells CRM? Learn more now.)