No doubt that this name, heck the entire software industry with the Dow Jones US Software Index down 14.3% year to date, but Salesforce (CRM) in particular, down 17.8% in 2022 had to show us something. Marc Benioff had to. That's exactly what they (he) did.

On Tuesday evening, Salesforce released the firm's fourth quarter financial results. The firm posted adjusted EPS of $0.84, which beat decisively expectations, on revenue generation of $7.33B. The revenue print also beat Wall Street, and was good for annual growth of 25.8%. Beyond the headlines, Current Remaining Performance Obligations, or CRPO, which is future revenue under contract expected to be recognized within 12 months, printed at $22B, up 22% year over year. Going broader, PRO, or Performance Remaining Obligation, which counts future revenue under contract without the one year timeline, increased 21% to $43.7B.

The numbers within the numbers also impressed. Adjusted operating margin landed at 15%, above expectations, while operating cash flow of $1.98B, despite being down from a year ago, handily beat what Wall Street had in mind.

Professional Services and Other... which grew revenue 46% to $498M.

The firm then breaks down the Subscription and Support segment into various clouds whose sales performance is then broken out for us:

Beyond those numbers, the firm sees full year operating margin printing at a GAAP 3.6% or an adjusted 20%, as well as operating cash flow that increases 21% to 22%. For the quarter, the firm expects CRPO to grow 21%.

The guidance is between solid and very good in my opinion. While investors are being asked to put up with some GAAP margin pressure as the firm digests its many recent acquisitions, there appears to be no corporate doubt about the firm's ability to grow sales in this environment. Just an FYI... Salesforce does little to no business in Russia or Ukraine.

I can find 12 sell-side analysts who are rated at five stars by TipRanks who have also opined on Salesforce since last night. There are nine "buy" or "buy equivalent" ratings, and there are three 'hold" or "hold equivalent" ratings. One of the holds, Scott Berg of Needham did not set a price target. The average target price of the other 11 analysts was $296.09, with a high of $360 (Kash Rangan of Goldman Sachs) and a low of $225 (Karl Keirstead of UBS). 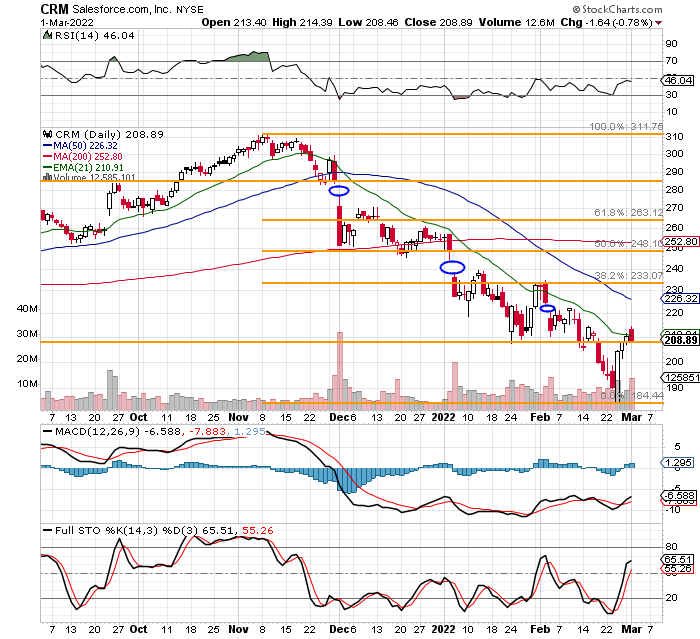 Yes, I am long CRM, so there's a chance that this is biased work, but it is my work, and it is my honest assessment. Readers will note that CRM bottomed last Thursday and has quickly reversed (at least for now) its downward trend which has been in place since early November. When placing the Fibonacci retracement model on this chart, I took the liberty of adding the less closely watched 23.6% and 78.6% retracement levels, so you have them all. The charting service I use for these articles does not offer those on its model.