Use the force... apparently enough businesses are... using Salesforce (CRM) , that is. The on-demand customer relationship management cloud based software provider reported the firm's first quarter financial performance on Thursday afternoon. "Growthy" types stocks had been slapped around for most of 2021. Less, perhaps, might be expected from Salesforce as the pace of recent growth had stalled. There were/are acquisitions post Mulesoft, and post Tableau to digest. As the stock sold off the day ahead of the numbers, I thought to myself "Self, let's grab a few shares ahead of the close, as close to the 21 day EMA as possible, and that's what I did.

Stock's up 5% overnight. Minor victory, on a smallish (trader-sized) position, about 10% of what I consider to be a full investment. Minor victory that is, as long as I ring the register. About that, let's do some thinking, shall we?

For the three month period reported, Saleforce posted adjusted EPS of $1.21, easily beating expectations, on revenue of $5.96 billion. That was also a beat and good enough for annual growth of 22.4%. First quarter operating cash flow printed at $3.23 billion, up 74%. First quarter adjusted operating margin landed at 20.2%. Billings hit the tape at $4.5 billion, well above projections of $4.1 billion. Current Remaining Performance Obligation (Also called current PRO, which is simply future revenue under contract expected to be recognized as revenue within 12 months.) increased 23% to $17.8 billion.

Breaking performance down, Sales cloud revenue popped 11% landing at $1.4 billion, while Service cloud revenue increased 20% to $1.5 billion. Salesforce Platform & Other to include Tableau showed growth of 28% to $1.7 billion, while Marketing & Commerce printed at $900 million, up 25%. The smallest business segment, Professional Services, showed the most growth (+147%), ending the quarter at revenue generation of $427 million.

On the performance, CEO Marc Benioff said, "We had the best first quarter in our company's history. We believe our Customer 360 platform is proving to be the most relevant technology for companies accelerating out of the pandemic. With incredible momentum throughout our core business, we're raising our revenue guidance for the fiscal year by $250M to approximately $26B, and our non-GAAP operating margin to 18%. We're on our path to reach $50B in revenue in FY26."

On acquisitions, the full year guidance includes a contribution of $500 million from the Slack (WORK) deal which is expected to close later this quarter, and $190 million from the Acumen Solutions deal that closed earlier this year.

So far this morning, I have noticed 12 five star (as rated at TipRanks) sell-side analysts that have opined on Salesforce. Of the 12, there are 10 "buy" ratings, as well as two holds. The low price target across this group is $235, and that came from one of the "holds". The other hold, Scott Berg of Needham offered no price target. The 10 "buys" run with an average price target of $287.50, with a high of $300 (2x)... Daniel Ives of Wedbush and Brent Thill of Jefferies. The low target among the buy ratings came from Brian Schwartz at Oppenheimer who is at $265. 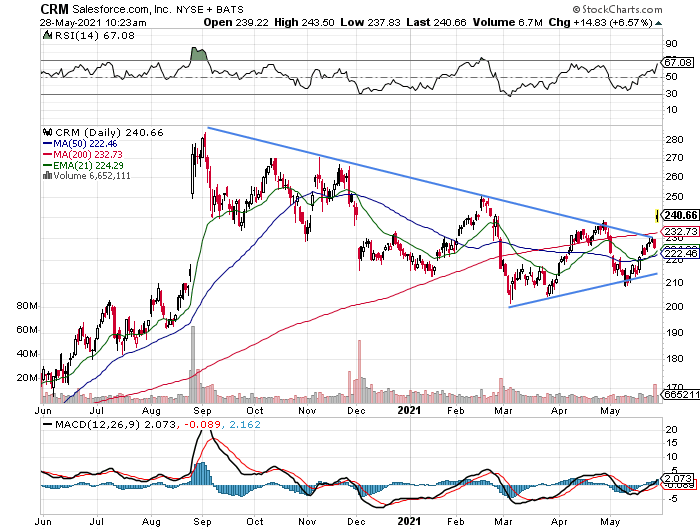 Readers will quickly see that CRM appears to have broken out of a closing pennant formation that really developed beginning in early March. Before that it was just a downtrend, which given the gap higher in late August, we really should have seen coming (Not saying I did.) Relative Strength is very positive, but not quite overbought, after this morning's gap higher, which creates a complication of its own. The daily MACD suddenly looks more positive and certainly would not be considered extended at all. Check this out... look how different Salesforce looks if I add six months to this chart.

How different a picture does this chart paint? Wow. It's as if, after all this time, Salesforce is finally trading where it belongs.

The most important thing that happened here is that CRM has now retaken its 200 day SMA at $232 after retaking and holding the 21 day EMA and 50 day SMA just about a week ago. For my overnight trade, the 200 day line is my panic point. Should that not hold, there is surely if not stock specific trouble ahead, trouble ahead should software and tech underperform in general.