Like a corps of snare drummers prepping ahead of the base drum as the troops step off on parade, Salesforce (CRM) reported their firm's second quarter financial results on Wednesday evening. That sound you heard was the beat, or the repetitive beats, that came as fast and furious as might the sound emanating from one of those snare drummers that are now stuck in the back of my brain. Garryowen in glory.

Salesforce for the three month period reported adjusted EPS of $1.48, and GAAP EPS of $0.56, both beats of more than half a dollar in magnitude. Revenue generation amounted to $6.34 billion, up 24.3% year over year, and also beat Wall Street. Adjusted operating margin expanded to 20.4%, also beating consensus, while operating cash flow hit the tape at $386 million, absolutely crushing estimates by more than $200 million. Now sit down. This performance generated free cash flow of $173 million in a quarter where the pros were just looking for something above zero. Salesforce crushed the quarter. There is no other way to put this.

Let's break down revenue contribution by business unit. Subscription and Support, which is really most of the company, drove revenue of $5.91 billion, up 22%, and above expectations. The number is also good for 93% of the firm's revenue pie. Professional Services posted $426 million in sales, up 37%, and above Wall Street.

The reason why the Subscription and Support reporting segment is so large is because the firm stuffs nearly all of their cloud services and offerings into it. Sales increased 15% to $1.477 billion. Service increased 23% to $1.6 billion, Platform and Other popped 24% to $1.882 billion. That's where you will find the old Tableau. Marketing and Commerce revenue grew 28% to $955 million.

One more thing. Slack revenue showed 39% growth had it been a stand alone company. The frim increased its expectation for expected revenue contribution from Slack from $500 million to $530 million for the full year. Not yet a big business for Salesforce, but the ball is rolling in the right direction.

Not going to lie. Don't love it as much as I love the firm's performance. Cash and cash equivalents are slightly higher over six months. Marketable securities are lower, as are net accounts receivable. This drags total current assets down from almost $22 billion six months ago to more than $16 billion as of the end of the quarter. Current liabilities are actually larger than current assets though not larger than they were. Total assets easily dwarf total liabilities less shareholder equity. I have one big "however." On the total asset side, the entry for Goodwill has increased from $26.3 billion in January to $48.1 billion as of the end of Q2. I'm not saying that it's not justified. It kind of makes me go "hmmm." 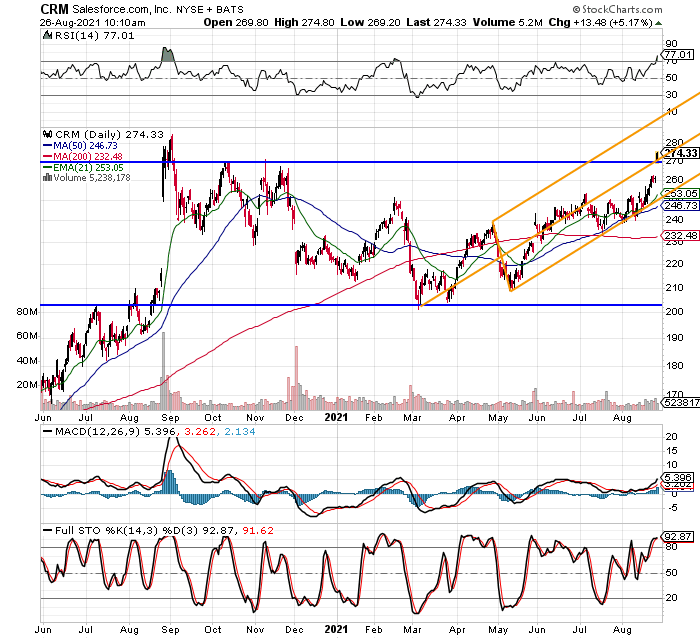 The stock is trading nicely higher this morning. (FYI: I am long this name.) The daily MACD looks strong. Both the RSI and the Full Stochastics Oscillator are telling us that CRM is technically overbought. We have a basing pattern that has been in place for about a year. At least that gap from last August was filled in February, so we do not have to worry about that. We do have a smaller gap to watch from this morning's action.

I placed the top of the base (range) at $270 as this spot acted as resistance three times in late 2020, despite trading as high as $284 last September. Should this $270 pivot hold, then I am looking at a $324 target price. If not, I think I'll add as the gap fills. Note that the pivot also just happens to be where the central trend line of our Pitchfork going back to March crosses with the present. There is a lot going on technically right at this spot.

Despite not loving the balance sheet, I still like Salesforce a lot, I think the CEO is a winner, and I really like the drumbeat... of victory.