In his first "Executive Decision" segment of Mad Money Monday night, Jim Cramer spoke with Jay Snowden, president and CEO of Penn National Gaming (PENN) , the casino operator. PENN has raised $700 million in additional capital and its shares have recovered to new highs.

Also on the call were Dave Portnoy and Erika Nardini, the founder and CEO of Barstool Sports, which has partnered with PENN for sports betting and sports-related content.

Snowden said their reopening is off to a good start, with 70% of their properties operating at 50% capacity.

Portnoy added that he's anxious for the return of sports, although Barstool has been able to keep their audience engaged with other content, like video games and the stock market. He said there's no doubt that when sports returns, Barstool will be the dominant player in their space. Nardini said there is no audience like Barstool's and they have the fastest growing audience on every social network.

With all these glowing comments let's check and see if the charts agree.

In this daily bar chart of PENN, below, we can see that prices made a life-threatening plunge from February to March. Prices made a "V" bottom and then a "retest" in early April before resuming the recovery. PENN touched a new high earlier this month. Prices have been consolidating their gains since late May and look poised to break out the upside from a small triangle formation.

Trading volume was heavy in March and May and contracted as prices traded sideways from late May. The reduction in volume during a triangle pattern is classic and understandable. As a trading range shrinks there is less opportunity to make money and thus active traders move elsewhere.

The On-Balance-Volume (OBV) line has been strong from the March nadir and looks ready to move higher. A strong OBV line tells me that buyers are more aggressive.

The trend-following Moving Average Convergence Divergence (MACD) oscillator is above the zero line in a take profits sell mode but narrowing towards (hopefully) towards a new buy signal.

In this weekly bar chart of PENN, below, we went back five years to get some perspective on the recent big swings. Prices have been oscillating in wider and wider swings since 2017 and now look potentially poised to break out on the upside for a new sustained move higher.

The slope of the 40-week moving average line is positive again. The weekly OBV line has been very strong and the MACD oscillator is bullish.

In this daily Point and Figure chart of PENN, below, we used the classic even dollar increments for plotting boxes and a five-box reversal to reduce the swings.

Here the chart shows a potential new high price target of $41. This will be a breakout. 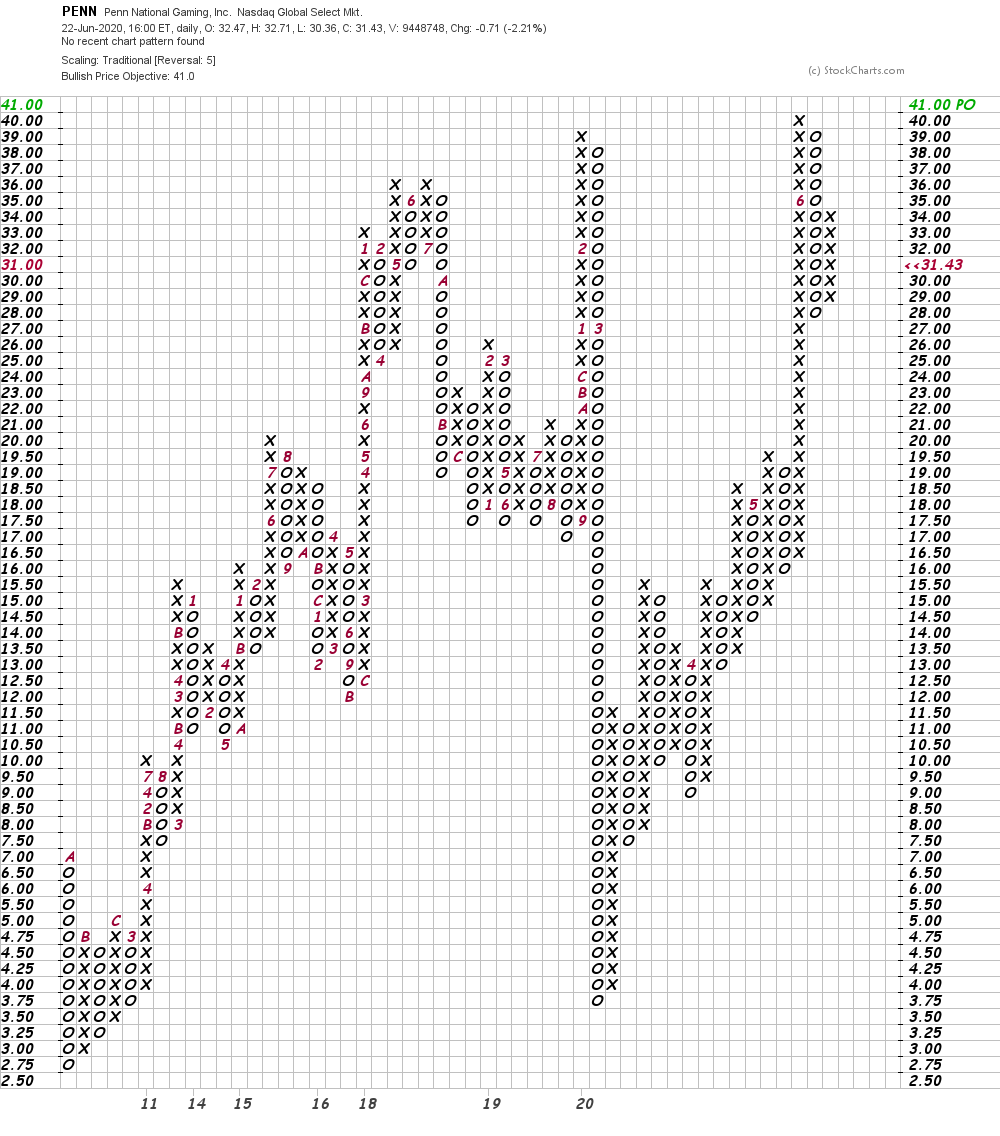 In this weekly close only Point and Figure chart of PENN, below, we show a lot of price history. Here the chart is projecting an $87 price target longer term. 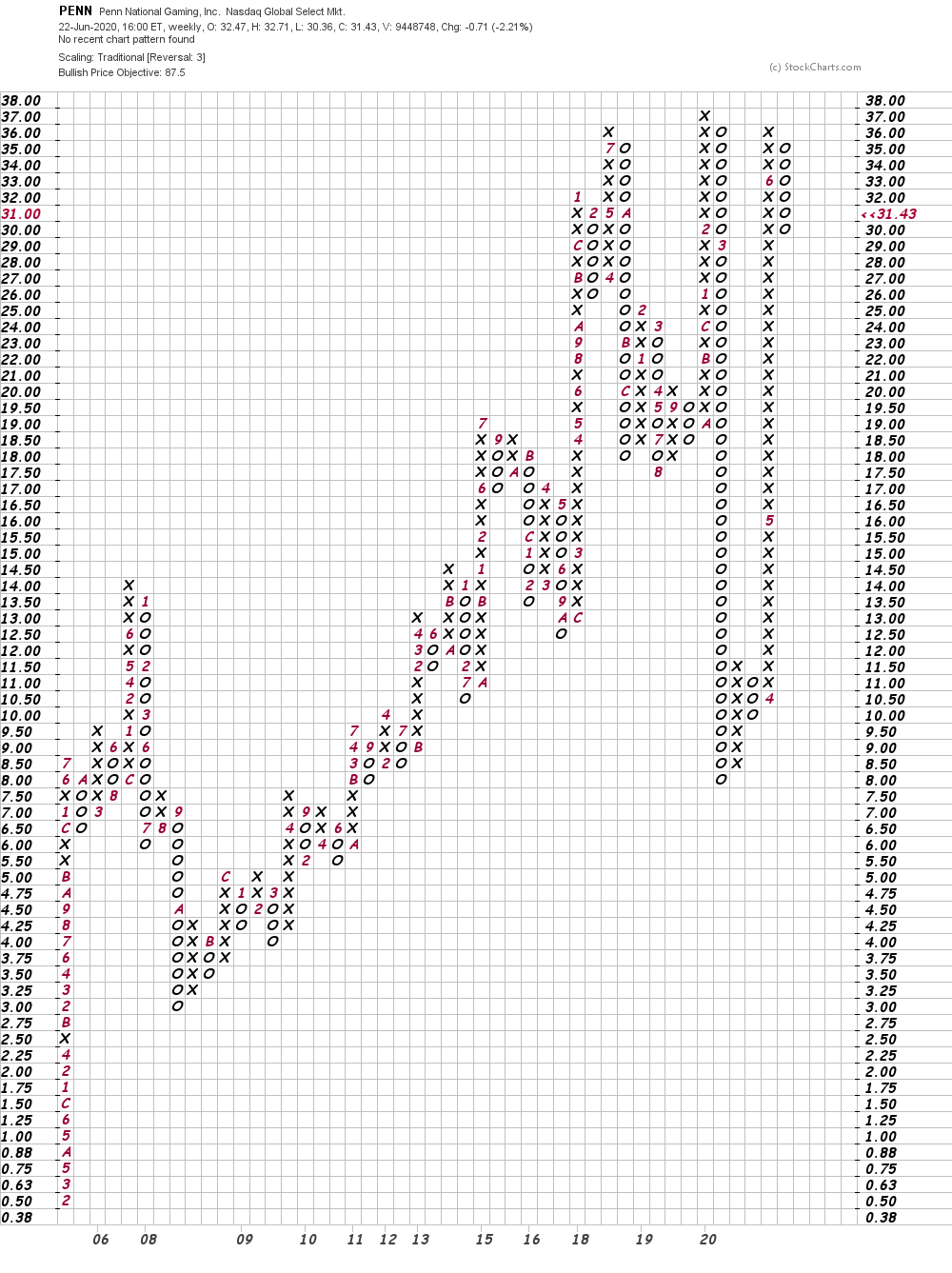 Bottom line strategy: PENN looks about ready to break out of its triangle pattern. Traders could go long on strength above $35 risking a close below $30. Add to longs above $41.

Get an email alert each time I write an article for Real Money. Click the "+Follow" next to my byline to this article.
TAGS: Investing | Stocks | Technical Analysis | Trading | Digital Entertainment | Video Games | Gaming | Mad Money | Executive Interview | eSports