At the top of Monday night's Mad Money program, Jim Cramer noted that there were several negative catalysts driving stocks lower. First, as the calendar turned over to December, many large funds began taking profits in their biggest winners. Many investors simply didn't see this profit taking coming, Cramer said, which led to sellers overwhelming the few buyers that remained.

Then there's Roku  (ROKU) , the streaming device maker that always seemed to bounce back from negative news. That was until Monday's 15.1% decline.

In this daily bar chart of ROKU, below, we can see that prices have had some big up and down swings since early August. Prices have crossed above and below the mostly neutral 50-day moving average line a number of times. Rising or falling $70 in a short period of time may sound rewarding for nimble traders but it is probably nerve wracking for most investors.

Despite these nail-biting gyrations we can see a pattern (so far) of higher lows from early October. A move below $120 would break that pattern but for now we'll go with it.

The daily On-Balance-Volume (OBV) line shows a rising pattern from early October which suggests that buyers have been more aggressive in this environment.

Aside from October, the Moving Average Convergence Divergence (MACD) oscillator has spent the year above the zero line in bullish territory. Recently the MACD oscillator has crossed to the downside for a take profits sell signal.

In this weekly bar chart of ROKU, below, the bigger picture is not as challenging looking as the daily chart. Here the price action looks like a large consolidation pattern or continuation pattern. Prices trade sideways for several weeks before the previous trend is resumed and ROKU breaks out on the upside.

Prices are above the rising 40-week moving average line and the weekly OBV line has been in a steady uptrend which confirms the longer term gains.

The MACD oscillator has been bullish since February but has turned to a take profits signal recently.

In this first Point and Figure chart of ROKU, below, the software has "read" the price action and determined that it shows more rally failures than accumulation, and a downside price target in the $96 area is shown. 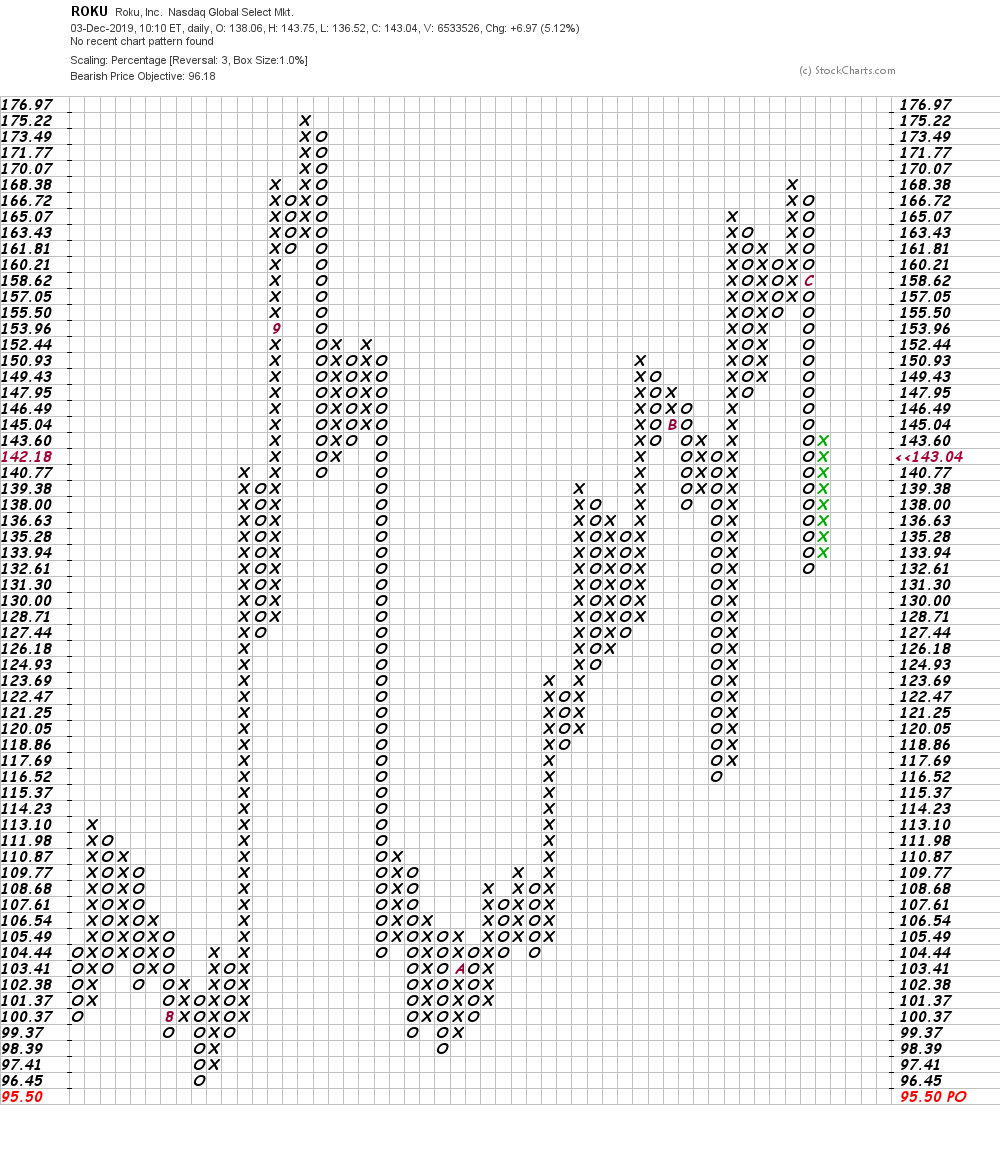 In this second Point and Figure chart of ROKU, below, we used weekly data and here a big upside price target in the $270 area is being projected. Two extremes.

Bottom line strategy: The key levels I would pay attention to for ROKU is the $120 area below and the $170 above. A break of this $50 trading range is likely to result in further sharp weakness or strength. This price action is not for the timid.

Get an email alert each time I write an article for Real Money. Click the "+Follow" next to my byline to this article.
TAGS: Investing | Stocks | Technical Analysis | Trading | Digital Entertainment | Movies | Mad Money

You Better Have a Game Plan for Nvidia

Profit-taking and rotation could be hurting NVDA, so play carefully to prevent this winner from becoming a loser.

The stocks that are leading are a completely different group than has led from the March lows.