Robinhood Markets (HOOD) made about as high a profile debut as any stock can. Last summer, the shares were priced at $38 a piece, which was at the time... toward the lower end of the expected range. Within days, August 4 to be exact, HOOD peaked at an intraday high of $85, closing that session at $70.39.

That was pretty much the ballgame right there.

The stock, which traded above its IPO price for the last time on October 26, closed at $12.07 on Thursday night, and has been trading 4% to 5% below that throughout Friday's pre-market trading period. The now long suffering stock, pressured this time by a downgrade to a "sell" by Goldman Sachs analyst Will Nance.

Those of you with good memories will recall that indeed it was Goldman Sachs (GS) that acted as lead banker back when the sun shone a little brighter on Friar Tuck and friends.

Nature of The Beast

Robinhood's business ended 2021 with 22.7M net funded accounts. It was the perfect environment to grow a retail focused brokerage not charging a commission. The pandemic had forced multitudes of workers to either work from home or not work at all. Fiscal stimulus rained down upon those masses. Interest rates were stapled to zero. Growth was impressive.

Since then, the masses have gone back to work.... many on location, monetary conditions have tightened and are tightening, the fiscal punch bowl has run dry, and markets have been slapped around by reality. Obviously, Robinhood faced a tougher go of it. For the firm's fourth quarter, Robinhood posted a GAAP EPS loss of $0.49 per share on revenue of $363M. Both numbers fell short of Wall Street's expectations and year over year revenue growth decelerated to 14% from 35%, 131% and 309% over the previous three quarters. In addition, Robinhood guided Q1 revenue below $340M versus the $440M that Wall Street was looking for at the time.

Fully aware of this business seemingly in decline, Robinhood expanded its businesses into cryptocurrencies, retirement accounts, and even recently... extended hours trading. Robinhood used to permit trading from 9am to 6pm ET, around the regular trading hours at US exchanges of 9:30am to 4pm ET. Now, Robinhood like most electronic brokerages will permit trading from 7am to 8pm. Some brokerages allow trading as early as 4am. Robinhood has not gone there just yet.

Back to Goldman Sachs analyst William Nance who placed a "sell" rating on HOOD on Friday morning, down from "neutral." Nance wrote, "We believe softening retail engagement levels, continued weakness in account growth, and a limited path to near term profitability are likely to limit outperformance over the next 12 months." Nance adds, "We see an acceleration in user growth as a key requirement for shares to re-rate higher." Nance does note that Robinhood's cryptocurrency business does have "much better" economics but that the recent decline in trading volume is offsetting any tailwind. Nance has a $13 target price on HOOD.

In all fairness to Robinhood, William Nance is not very highly rated at TipRanks. The analyst is rated at less than one star. In all fairness to Nance, it's not just him. On Thursday, five star (at TipRanks) rated analyst Brian Bedell of Deutsche Bank maintained a "hold" rating on HOOD, while reducing his target price from $14 to $11. Bedell sees a troubled environment ahead for brokers, asset managers, and exchanges going into the coming earnings season.

The flow of cash is a problem, as for the most recent quarter, Robinhood posted cash from operations of $-275.6M, cash from investing came to $-58.4M, and cash from financing amounted to $-6.1M. Free cash flow per share hit the tape at $-0.35, as second consecutive negative quarter.

Robinhood ended Q4 with cash and equivalents of $6.353B, and cash and segregated securities of $3.992B as well as receivables of $6.638B. While the firm has no long-term debt of the books, it does have $3.651B in short-term borrowings and as of the last reporting period, an accounts payable balance of $6.728B. They don't make it as easy to follow as do most firms, but it does appear that Robinhood did have a current ratio of well more than "one" as of the end of their fiscal year. This would mean that for now, they can meet their obligations. There is no abuse of the entry for "goodwill." As for the layout of their balance sheet though? Not my favorite.

The hard fact is that Robinhood loses money and not too many folks see them turning a profit anytime soon. About 10% of the float was held in short positions as of mid-March. Is that enough to force a short-squeeze? Not an AMC Entertainment (AMC) or GameStop (GME) style short squeeze, but a short squeeze with moderate expectations? Maybe. 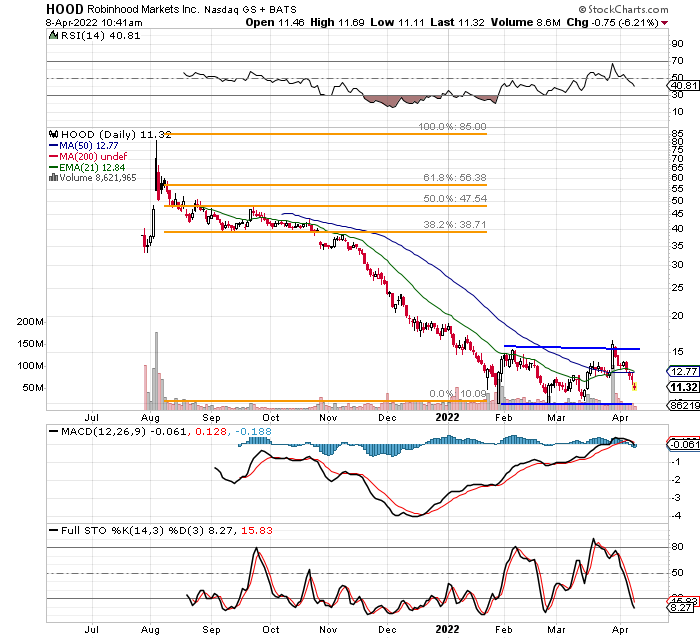 The fact is that the stock has been basing almost all year. There is established thrice tested support at the $10 level, with fuzzy, quasi-type resistance around $15. I placed a standard Fibonacci model on the chart for fun, but I would not look for a 38.2% retracement of the entire sell-off any time soon.

What an interested investor with a longer time frame and some tolerance for risk could do is... buy this dip, let's say...

Get an email alert each time I write an article for Real Money. Click the "+Follow" next to my byline to this article.
TAGS: Earnings | Investing | Markets | Stocks | Technical Analysis | Trading | Financial Services