Cisco Systems (CSCO) was mentioned during the Lightning Round of Mad Money Tuesday night. Jim Cramer said, "I think Cisco is terrific. They're doing a remarkable job. I say buy, buy, buy."

Let's check out the charts and indicators to see if the charts say "bye" instead of "buy".

In this daily bar chart of CSCO, below, we can see that prices rallied strongly from late December to the middle of April. Since the high in April prices have displayed a choppy, sideways to higher pattern. Sometimes this kind of pattern can be a bullish consolidation pattern or it can become a reversal pattern. The devil is in the details.

Prices have traded above and below the generally rising 50-day moving average line, while the daily On-Balance-Volume (OBV) line has moved sideways suggesting a balance between aggressive buying and aggressive selling.

The trend-following Moving Average Convergence Divergence (MACD) oscillator has crossed to the downside for a take profits sell signal and the oscillator is very close to crossing below the zero line and an outright sell signal.

In this weekly bar chart of CSCO, below, we can see that prices are above the rising 40-week moving average line. Back in April prices were extended above the 40-week line but the sideways price action has corrected that overbought condition.

The weekly OBV line shows a decline from April and that suggests that sellers of CSCO have been more aggressive.

The weekly MACD oscillator is pointed down in a take profits sell mode.

In this Point and Figure chart of CSCO, below, we can see an upside price target of $65 being projected. A decline to $54.16 or $53.62 is likely to weaken this chart picture. 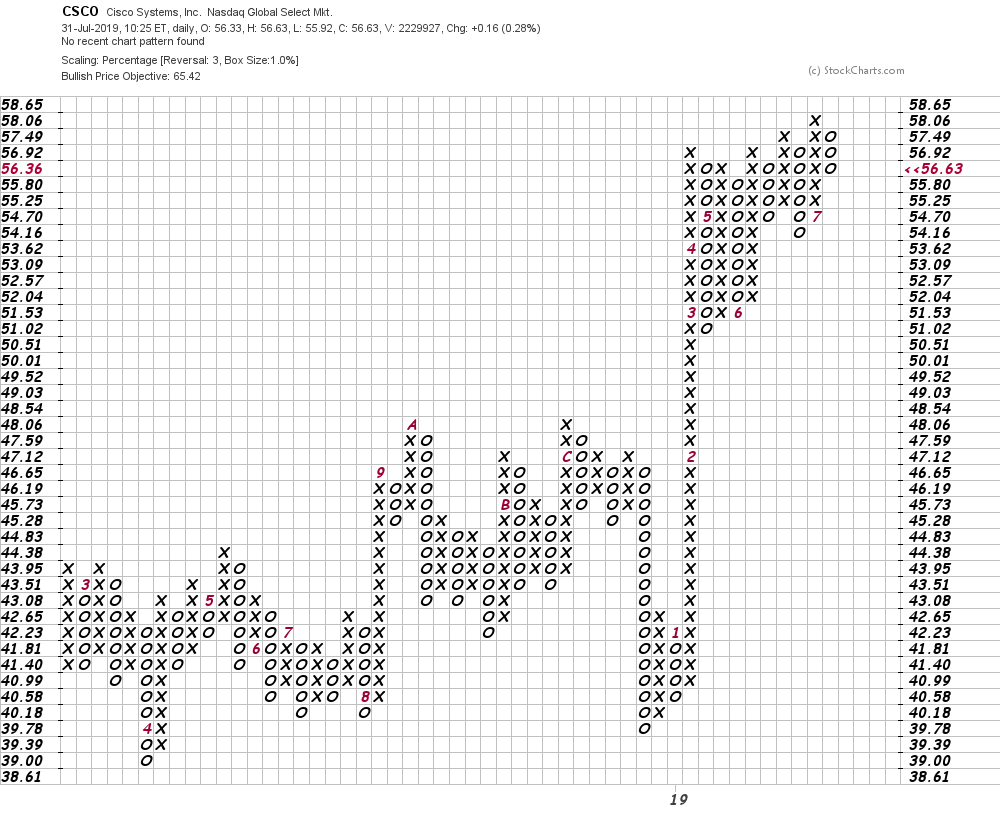 Bottom line strategy: Charts and what they tell us can be bullish or bearish and of course confusing at times. Right now it looks like CSCO is "rolling over" and it could weaken in the weeks ahead. A close below the recent low at $54 will turn things more negative and that is where the bulls should have their sell stops.

Get an email alert each time I write an article for Real Money. Click the "+Follow" next to my byline to this article.
TAGS: Investing | Stocks | Technical Analysis | Trading | Technology | Technology Hardware & Equipment | Mad Money

Can a Company With Attractive Results Be an Ugly Stock?

The short answer is yes, as the shares of cosmetics maker Estee Lauder have shown over the years when they've become overvalued.

Here's My Narrative on the Market's Action