In his second "Executive Decision" segment during Tuesday night's "Mad Money" program, our own Jim Cramer sat down with Vlad Shmunis, chairman and CEO of RingCentral (RNG) . RNG is an Internet telephony company that just posted 33% revenue growth and raised its full-year outlook.

Shmunis said that their software allows companies to communicate the way they want to, whether it's by voice, video or text messaging. Their software runs on phones, tablets, PCs and on dedicated phone hardware. Because RNG is in the cloud, communication can be built into any existing work flows.

The fundamentals of RNG are above my pay grade so let's take a look at the charts and indicators.

The daily On-Balance-Volume (OBV) line shows a rise to late September and only a shallow move lower in October which tells me that buyers have been more aggressive most of the time and we only saw modest selling in October.

The trend-following Moving Average Convergence Divergence (MACD) oscillator recently crossed to the upside from below the zero line for a cover shorts buy signal.

Before moving onto the weekly chart we need to tell you that RNG was downgraded to a "Sell" by TheStreet.com's quantitative service.

In this weekly bar chart of RNG, below, we can see an impressive rise the past three years. Prices tested the rising 40-week moving average line in October and it currently looks like this test was a buying opportunity.

The weekly OBV line shows a rise from 2016 to May of 2018, followed by a minor drift lower. A resumption of the rally in the OBV line will be bullish.

The weekly MACD oscillator turned down at the end of September for a take profits sell signal.

The two moving averages that make up this indicator have not yet begun to narrow - a fresh buy signal could take a few weeks. 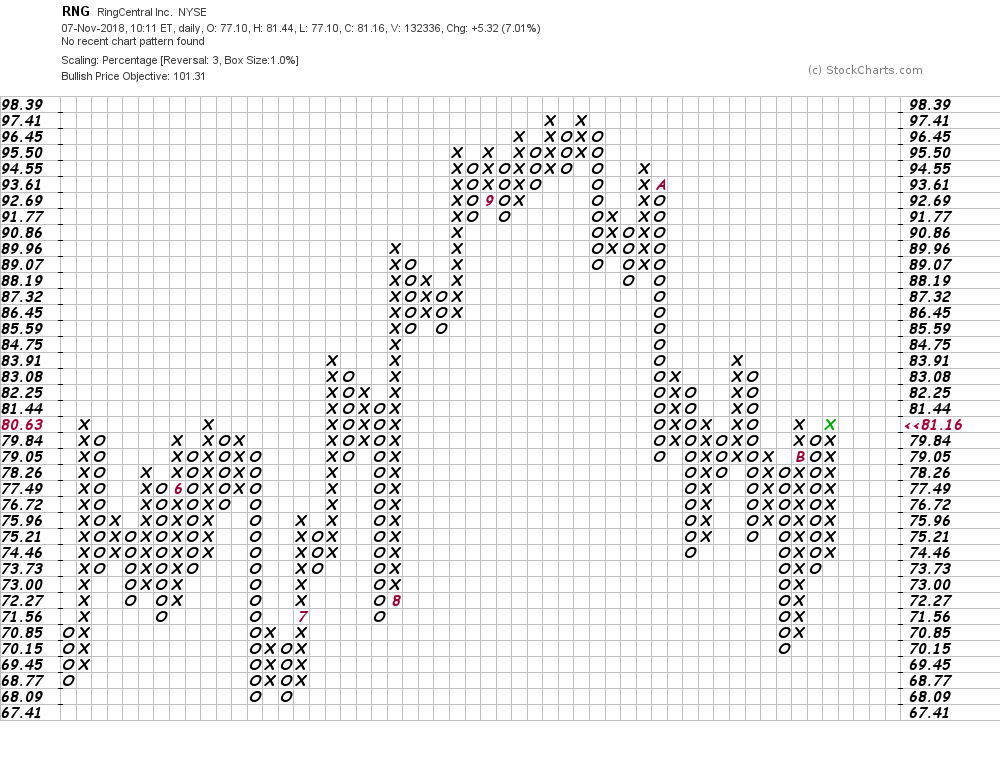 Bottom line strategy: RNG looks like it wants to move higher but it could take a week or two of some "backing and filling" or some consolidation before the rally resumes. Investors need to be patient and risk a close below $70 if they trade RNG from the long side.