Thinking a lot this morning about the transports. Hard not to with what looks like at least over the past two weeks or so, confirmation of "Dow Theory"... almost forgot such a theory even existed. One has to think though that with transports, industrials, and small caps rallying together almost every single day of late, and at least some profit taking across the cloud, biotechs, and internet stocks, that someone is going the other way. Probably more than a few people.

We have seen more than a few attempted rotations out of growth and into value over the year to date or even a number of years. Can it be different this time? It is interesting that investors are not running from "stay at home" stocks, but merely inching away. Heck, these kinds of stocks will be indispensable going forward.This will be true of Covid or no Covid. Cold War or no Cold War. President Trump or President Biden.

That said, are the stocks suddenly playing catch up? Oh, they need more than policy on their side. They need more than a fancy looking Q3 GDP that covers less ground than the Q2 number gave up. Industrials, Transports (that actually are industrials themselves), Energy, and even Financials and Discretionary types will need at a minimum, some organic growth built upon the table set by policy.

So, a long story short... should infection rates actually start trending lower, should the Russian vaccine only be the beginning, should the Regeneron (REGN) actually be a significant improvement over what we have now, and should Congress actually stop embarrassing themselves before a nation, I need a transport name, a new one.

I have been in and out of Southwest Airlines LUV so often, the name tires me. The airlines have been hot lately, but the Dow Jones US Airlines Index is -46% year to date. Probably still close enough to the bottom, but I know that I have no intention of flying for business nor pleasure anytime soon, and then even longer. I'll drive wherever I have to go. Thank you. Marine Transport is interesting should a weaker US dollar boost energy prices. I have dabbled in Kirby Corp (KEX) in the past, but not recently. I just do not yet trust demand for oil going forward. Delivery Services and the truckers have been hot, but those two groups have been beneficiaries of the pandemic economy, and are up 32% and 28% year to date, respectively. That leaves out old friends, the rails.

The railroads are up this year, but well behind the leadership industries within the sub-sector. The Dow Jones US Railroad Index is +4.57% this year. Kansas City Southern (KSU) , the one that was down on Monday, is actually the group's year to date leader at +21%. Canadian Pacific Railway (CP) , and Canadian National Rail CNI) have also out-performed the industry group this year. Yes, in answer to your next question, both of those names are constituent members of the index despite the letters "US" being on the label.

I have for years leaned on CSX Corp (CSX) for exposure to the rails, first out of loyalty to the late, and legendary Hunter Harrison, and then because I was already there. CSX has always been an extremely efficient railroad. Right now, and it is really because I like the technical set-up more, I am looking at Union Pacific (UNP) .

You'll have to go back to the end of July. Union Pacific reported what looked like a pretty tough second quarter. Yes, the firm did beat expectations for profitability. Not adjusted profitability, but GAAP profitability. They did this on revenue that missed the mark, and decreased by some 24% year over year. Operating Ratio increased to what should be an impressive 61%. Wall Street wanted even more.

What went wrong? Simple. The economy shut down. Revenue carloads fell by the kinds of numbers no one had ever thought possible prior to the pandemic. Autos were down 64%, Coal was down 24%, Metals & minerals were 19% lower, and Industrial Chemicals and Plastics suffered a 10% decline. UNP added at that time that the firm expected to see carload volumes drop by a rough 10% for the full year.

Know what? Just a hunch, but if vaccines are ahead of schedule, if the virus itself might have slowed its exponential growth, if doctors are going to be better able to treat those who fall ill, and then if there is at least one more fiscal push, with a very accommodative Fed greasing the wheels, then the rails are going to have to grease the wheels as well, as in raising guidance. Just a thought. Another thought... Union Pacific has declared a quarterly dividend payment of $0.97 per share on September 30th to shareholders of record on August 31st. 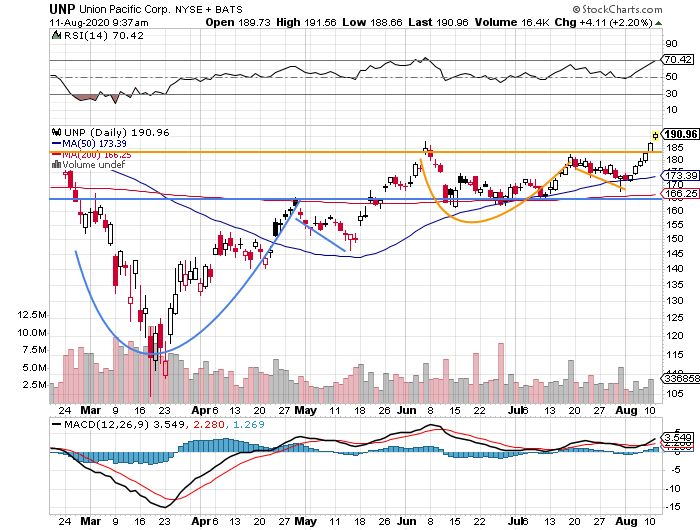 See what I see? Back to back cup with handle patterns that provided breakouts. Even more interesting, the pivot created back in late April actually provided support for this name on three attempted selloffs from June through July. That my friends is what algorithms at work look like. Those are not cognitive managers lying in wait at a specific level. My thinking is that should the economy see some organic growth, this stock can run as high as $220. I'll probably try to buy some this week when the transports have a weaker day.

Get an email alert each time I write an article for Real Money. Click the "+Follow" next to my byline to this article.
TAGS: Economy | Investing | Stocks | Technical Analysis | Trading | Transportation