When looking for trades, sometimes the best place to look is in the realm of the illogical. If you see a stock moving in a direction that causes you to scratch your head, often there is a trade to be had. The challenge is the trade is often opposite of your logic, hence, the illogical part of the search.

A good example in today's trading is REV Group (REVG) . Earlier this week, the company reporting disappointing revenue despite posting better than expected earnings per share results. The $0.37 per share earnings came in ahead of the $0.34 estimate but revenue of $593.3 million fell far short of the $663.4 million expectations.

The stock, logically, was hit hard, but short-term investors may have actually overreacted. So, today's big bounce may look illogical on first glance, but dig a little deeper and you might still think it's illogical. The full year guidance of $2.3 billion to $2.45 billion is short of the $2.54 billion expectation. That means the $70 million shortfall still doesn't cover the full year lowered guidance. That means Q4 is likely to miss by just as much as Q3. The company did announce a $150 million buyback. That's a pretty big buyback given the company's market cap sits around $1 billion.

These are all the things going through my mind when I look at the daily chart. Three days ago, we had the emotional sellers. Support kicked in on the technical side, giving us a bounce yesterday, but the move today is a headscratcher. The stock hit a new high not seen since the big drop in June.

So, why the bounce? Is it the buyback? Probably. But I think folks might be optimistic because the free cash flow guidance went from $65 million-$88 million up to a new range of $90 million to $100 million. So, while Net Income and Adjusted Net Income ranges tightened, the midpoints only nudged lower. 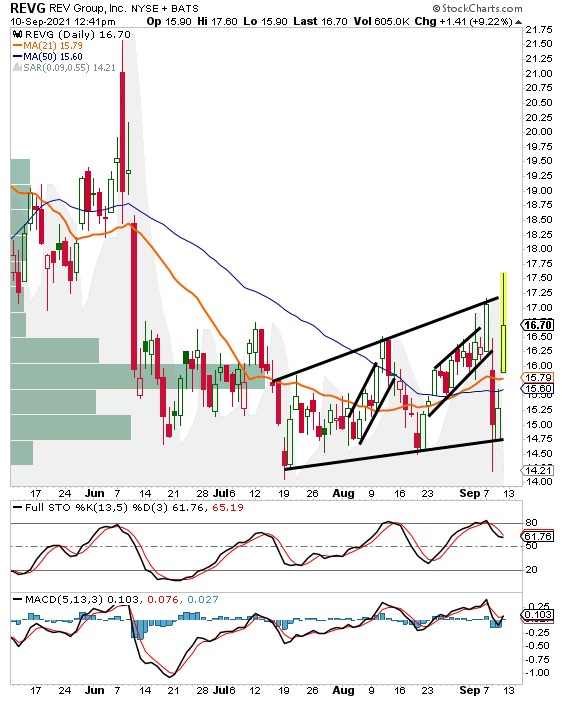 Am I buyer here? No. But this has my attention. If the stock closes above $17, then I believe it does become a buy. The Full Stochastics and MACD are on point to turn bullish. The MACD may actually trigger today along with the parabolic stop and reverse (PSAR) while the Full Stochastics is probably a few days away.

But this is one of those times when the stock logically shouldn't be higher than where it was prior to earnings, but since it is, we need to keep this one on the watchlist because the illogical action might just set us up for an illogical buy.

Get an email alert each time I write an article for Real Money. Click the "+Follow" next to my byline to this article.
TAGS: Investing | Stocks | Technical Analysis | Trading | Transportation