Of the few names that reported their quarterly financial results on Wednesday evening, I had given you Five Below (FIVE) , and chose to allow you all to buy it ahead of me. What a nice guy. Actually, the delay saved me more than a dollar on entry, so thank you. The plan written up has, at least at this point... worked to perfection. So, we'll make a little dough on that one. We could have done better. A whole lot better it would appear. While FIVE has kicked tail and taken names throughout the overnight session, Lululemon Athletica (LULU) is trading as if they had found substantial gold reserves buried directly beneath the firm's Vancouver corporate headquarters. Perhaps they have. Let me explain.

Lululemon Athletica beat fourth quarter expectations for earnings as well as for revenue. Let's drill down on this. You may have noticed the horror that was December Retail Sales. Horror? Not here. The beats for profit and sales were only a part of this story. Comp sales roared. 16% growth, 17% adjusted for constant currency. 16%, gang. Everyone else brags about 4%. Direct to Consumer? This is huge. 37% growth. Rock and Roll.

Want guidance? This was a triumphant earnings call for CEO Calvin McDonald. The company expects to open more than 20 new international stores in 2019, at least half of those will be in Asia. Full year 2019 EPS is now being guided toward a range spanning from $4.48 to $4.55. That's versus consensus of $4.39. The mid-point for full year revenue was also guided above industry consensus.

Considerable talk throughout the evening was devoted to an expansion of the firm's product portfolio. Not just casual wear for woman, the brand is expanding into office wear, hair, face and body care, and wait for it ... men's fashion. Who should be scared? Nike (NKE) and Under Armour (UAA) . That's who.

In my opinion, this is why the sudden surge in the share price overnight. Better than solid earnings performance. Better than solid guidance. The subscription economy. Recurring revenue. Think it won't work at a retail/apparel operation? The "loyalty program" has been tested in both Edmonton and Denver at different price points. In both markets, expectations were exceeded. I did mention the 37% growth in direct sales to consumers above. Right? Hmm.

Know anyone who wears this stuff? I married one 30 years ago. Bringing up the national average every day. I'll tell you this. She goes through this stuff often enough to make looking at a subscription service seem sensible. My wife loves the clothing. From the looks of the gym, so do many others. She bought me one of their baseball undershirts for men, to work out in. I'm not kidding, this thing is ridiculously comfortable. Clings to the skin too, so you look like a beast.

One unanswered question remains. After a 13% overnight run, is there one rock left unkicked. Is there any money left to be made. By us. Why? Because, we rule. 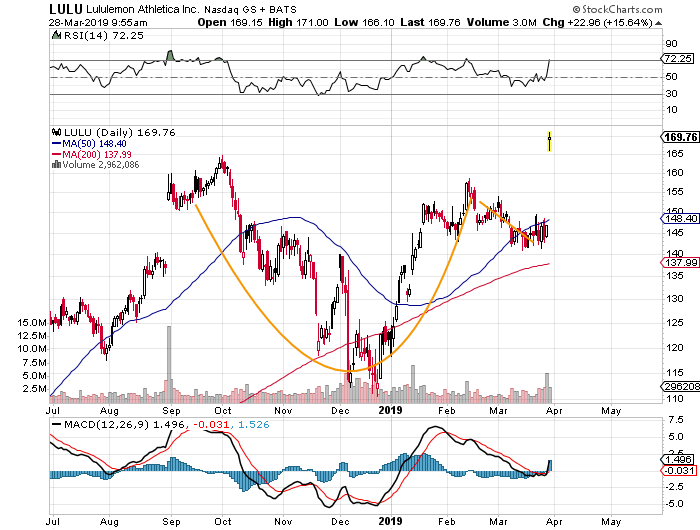 The shares have broken out of a base which itself was born of a cup and handle formation. If the base is to be seen as an elongated handle, which I see as very possible, then these shares can still be bought, and could eventually reach prices between $185 and $190. For the interested investor, it now becomes a function of intelligent execution, being that the found money has already been made. This is how a new trader could go about entering such a position without exposing oneself to equity risk on an up day like this.

A Trader Could... (minimal lots)

Notes: The trader is laying out $2.60 for this set-up, which is a whole lot safer than $169 for the equity if my analysis fails. If the shares remain in between the two strike prices for three months, the trader is out the $2.60. The $2.60, unfortunately, will have to be added to net basis should shares end up being purchased. That means that the trader needs the stock to see $177.60 by June in order to break even. It also means that if the shares fall out of bed, the trader will be on the hook at $162.60. Understand, this is a safer way to play a name on the run that an investor has missed out on.

(Five Below is a holding in Jim Cramer's Action Alerts PLUS member club. Want to be alerted before Jim Cramer buys or sells FIVE? Learn more now.)

Get an email alert each time I write an article for Real Money. Click the "+Follow" next to my byline to this article.
TAGS: Earnings | Investing | Markets | Options | Stocks | Technical Analysis | Trading | Retail | Asia | Stock of the Day