In Monday night's 'Lightning Round' of his popular Mad Money program, Jim Cramer said this about WD-40 Co. (WDFC) : "What is there not to like with this company?"

Keeping that in mind, let's check out the charts and indicators.

In this daily bar chart of WDFC, below, a rally phase from February to early September lifted WDFC from around $120 to just short of $185. Since September the chart of WDFC has shifted to a sideways consolidation trend. WDFC has tested the $185 level a number of times but it has been unable to break through.

Higher lows can be seen from October but the On-Balance-Volume (OBV) line has been drifting lower from early September. Normally a pattern of higher lows and equal highs (around $185) would break out on the upside at some point but with a less than robust OBV line I don't have much confidence that WDFC will or can break out to the upside.

The Moving Average Convergence Divergence (MACD) oscillator has turned down below the zero line for an outright sell signal.

In this weekly bar chart of WDFC, below, we can see a sideways consolidation pattern from early 2016 to the middle of 2017. A strong rally has been under way from around the middle of 2017 and the trend is still pointed up. WDFC is trading above the rising 40-week moving average line.

The weekly OBV line has been strong for much of the past two years and only shows a little softness since early December.

The weekly MACD oscillator has been in a take profits sell signal since late September but could soon cross to the upside for a fresh outright go long signal.

In this Point and Figure chart of WDFC, below, we have a picture we can "spin" in either direction. 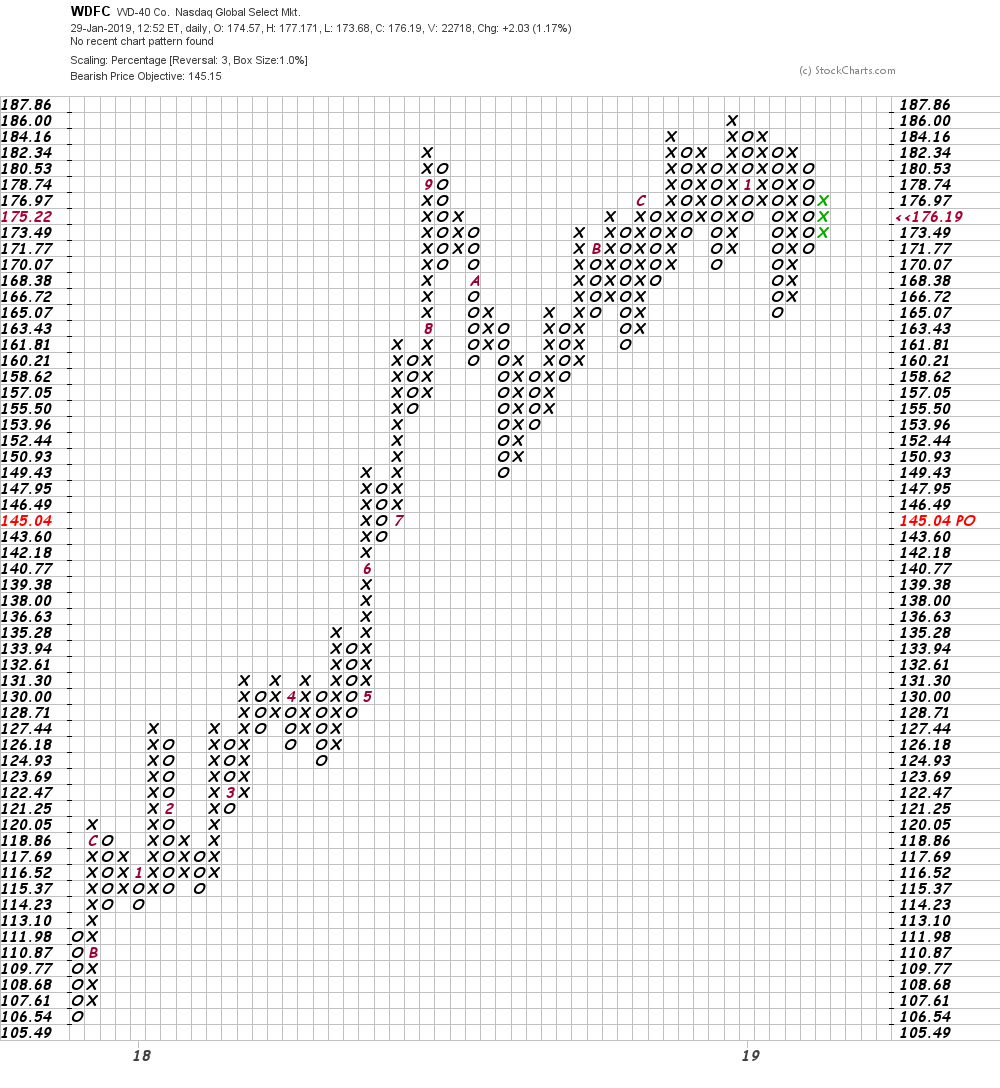 Bottom line strategy: For now I would respect the uptrend but I would like to see the OBV line strengthen on the daily chart before recommending a long position. Investors who are long should risk a close below the 200-day line or just below $160. A rally above $184 is likely to get the bulls excited.

Get an email alert each time I write an article for Real Money. Click the "+Follow" next to my byline to this article.
TAGS: Investing | Markets | Stocks | Technical Analysis | Trading | Household Products | Mad Money | Consumer Products

Amazon, Tesla News Stir Up Market but Divergences Remain in the Mix

The S&P 500 closes at new highs and FATMAAN names enjoy boost, but look below the surface for the real story.

Still, this may not be the easiest name to buy. No one is jumping in from the value side.

Cleveland-Cliffs Gets a Quant Upgrade -- What Do the Charts Say?

Let's check and see how the CLF charts look.