Apple (AAPL) is the Stock of the Day at Real Money. The stock price is softer in pre-market activity Friday morning on reports of the departure of Jony Ive - the company's top designer. Let's check the charts and indicators to see if the company can survive his departure. (It did when Jobs announced that he had pancreatic cancer.)

In this daily bar chart of AAPL, below, we can see that prices bottomed in early January - just a few days after the late December low of the broad market. Prices climbed steadily until early May when we made approximately a 50% correction.

AAPL has bounced this month and is slightly above the flat 50-day moving average line and the declining 200-day average line.

The daily On-Balance-Volume (OBV) line moved up with the stock price earlier this year but it declined in May and has not improved much so far in June.

The trend-following Moving Average Convergence Divergence (MACD) oscillator has been narrowing ahead of today's news and could cross to the downside soon for a take profits sell or even an outright sell signal.

In this weekly bar chart of AAPL, below, today's action will finish off the latest weekly bar. The slope of the 40-week moving average line has been negative or bearish and that does not bode well.

The weekly OBV line is generally positive or more constructive than the daily OBV line. The MACD oscillator on this longer time frame could turn up or down depending on the price action in the near-term.

In this Point and Figure chart of AAPL, below, we can see an impressive upside price projection of $261 but there is plenty of overhead chart resistance. This bullish move could be negated as a column of "O's" may unfold today. 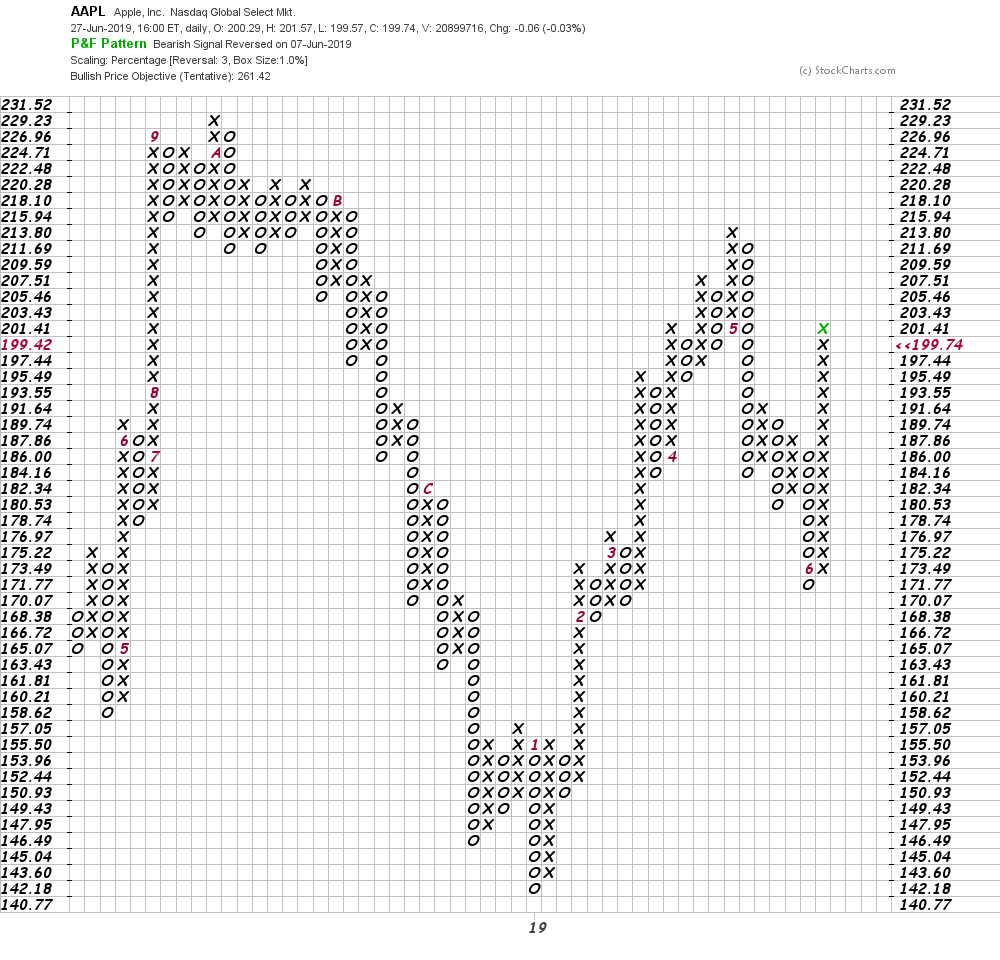 Bottom line strategy: Apple survived the death of its visionary founder and it probably has a deep enough bench to survive the loss of its key designer. Don't get too bearish but remember there are bigger macro issues that could be largely out of the control of management.

Get an email alert each time I write an article for Real Money. Click the "+Follow" next to my byline to this article.
TAGS: Investing | Stocks | Technical Analysis | Trading | Technology | Telecommunications | Stock of the Day