Is the time right? Right for what? To speculate just a little bit on a name that really has not participated as markets rallied off of their lows, but most certainly has every time there is a selloff. There has been a good reason for Under Armour's (UAA) underperformance. Forget headlines that made investors shake their heads at times, earnings have been awful. The firm reported its first quarter financial performance about a month ago. Expectations were low. The firm badly missed those low expectations. Under Armour posted quarterly EPS of -$0.34 on revenue of $930.24 million. The sales print amounted to a year over year contraction of 22.8%, which certainly was exacerbated by the impact of the public health crisis.

Last November, it was reported across the financial media that Under Armour was under investigation for its accounting practices. The firm, for its part, stood by its methods and publicly cooperated with investigators. Also last November, founder Kevin Plank announced that he would leave the post of chief executive to become the executive chair as well as chief brand officer. The firm moved Patrik Frisk from COO to CEO.

Under Frisk, the firm moved toward getting expenses, marketing expenses in particular, under control. The plan was to carve $350 million out of what were full year plans. Then Covid hit, and for apparel retailers, the rest of the story sort of tells itself.

Then I Saw This

Ever try to run with a mask on? I mean yes, all of the veterans have to train that way, but probably not too many others. Even a surgical mask can make running around the park quite difficult for those not used to it. I then noticed that Under Armour's new "Sportsmask" had sold out in under an hour after launch. The company cannot make more available until July.

Just what is a "Sportsmask"? It sounds like something everyone might want, not just folks trying to stay in shape during the age of Covid. The new mask, if you can get one, features three layers engineered for athletic performance. The first layer is a "spacer fabric" that stays off of the user's nose and mouth allowing for better airflow. The second layer is being referred to as "open-cell foam". This middle layer lets air flow, but not sweat, or any moisture. The third layer is the "UA Iso-Chill"... this layer is sort of kin to the original moisture wicking shirts that made Under Armour famous in the first place back in the 1990's. This last layer feels cool to the skin, and is treated with something called Protx2. Protx2 is a non-metal anti-microbial technology that inhibits the growth of bacteria.

The firm states that in testing, Protx2 kills the coronavirus. Hmm... maybe that's why they could not sell these masks fast enough. 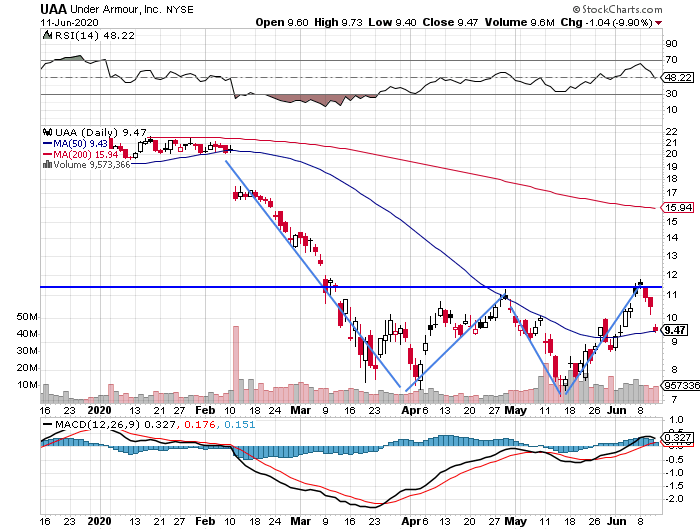 Technically, the stock formed a classic double bottom coming off of a significant downtrend. The pivot was formed close to $11.25 on May 1st. The problem for me right now is that the shares have recently failed in an attempt to move beyond that pivot and now appear to be struggling to hang on to their own 50 day SMA.

I think once an investor is satisfied that the $9.43 level stands, then one can think about speculation. A hot new product is a big deal, especially if it alleviates public fear. That said, they are out of stock and will be for another six weeks at least. That's all the time that the competition needs to catch up. If there is money to be made with this "Sportsmask", if there is real margin there, then how far behind can a Nike (NKE) be? How far behind can an Adidas (ADDDF) be?

Bottom line? I may go there, in small size, but just for a trade. I used to be an athlete. I would have really wanted one of those masks in these times. I really would have. In case you're wondering, UAA options tend to be a bit illiquid. Hence, the play has to be equity focused.

Get an email alert each time I write an article for Real Money. Click the "+Follow" next to my byline to this article.
TAGS: Earnings | Economy | Investing | Stocks | Technical Analysis | Trading | Apparel | Retail | Sports business | Coronavirus