I don't write about currencies very often unless they get to an extreme. But on Tuesday I noted the move in the U.S. dollar vs. the Japanese yen and how odd it seemed that the equity market was not terribly interested in it.

But it turns out the equity market has been quite interested in the currencies; it is just that the equity players haven't spent much time chattering about it.

Look at the chart of the Aussie dollar relative to the U.S. dollar. It had a big sideways move in May and in June it has exploded upward.

Now look at the chart of the small cap fund (IWM) . It, too, spent most of May in a sideways move and then late in the month and this week, it has had quite a move upward. That's all those "not big cap growth stocks" in there.

Now take a look at the chart the iShares MSCI Emerging Markets fund  (EEM) . It's the same picture, isn't it?

Why am I bringing this up? Because the Daily Sentiment Indicator (DSI) for the Australian dollar tagged 90 on Wednesday. And, yes, you see the chart correctly: It is back to its early January high. The New Zealand dollar tagged 91.

Curiously, the DSI for the U.S. dollar index is only at 33, so there is room for more hate of the buck. The Japanese yen is at 53, so that is in the middle of the road. The dollar/yen actually measures up into the 110 area, which is just shy of that red downtrend line, but I found it curious that the bullishness for the commodity currencies of Australia and New Zealand is now quite high.

For those unfamiliar with the DSI, it works on a scale of 0-100. Readings in the single digits are bullish and over 90 is bearish. You might recall in April, the DSI for oil, when it went negative, got to 4, which at the time I thought was quite extreme.

The DSI for Nasdaq is now at 88 (the S&P has some room since it is at 83), so there is room for Nasdaq to get folks even more excited, but we know readings over 90 lead to down days. Recall Nasdaq's DSI was single digits at the March low.

Aside from all of that, the Investor's Intelligence Bulls are at 53.5%, which leans high, but is not extreme. Over 55% and I consider it a yellow zone. Over 60% and it's gone extreme. 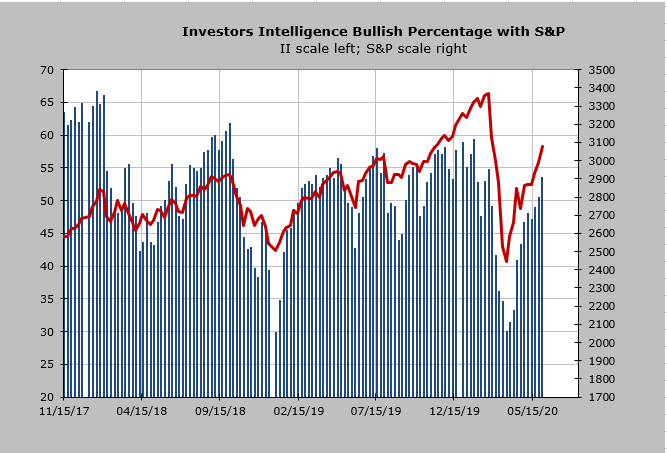 The breadth of the market remains solid. There is very little in the way of deterioration underneath, which is why you can't be bearish. So far Nasdaq has been unable to increase the number of stocks making new highs. We remain overbought and sentiment is getting quite confident, so we ought to have a correction. But for now the market doesn't care. Until it does.

Get an email alert each time I write an article for Real Money. Click the "+Follow" next to my byline to this article.
TAGS: Currencies | Investing | Technical Analysis | VIX |