Hayes said that it remains a challenging time for aerospace. People don't feel safe on airplanes, he said, despite the chances of contracting Covid-19 being very low. In the meantime, Raytheon is preparing for the return of aviation by cutting costs so they will be ready.

Hayes added that Raytheon continues to invest in defense technologies. He said regardless of who wins the White House the world needs to spend more on defense. The U.S. is losing its edge in some technologies to China and sometimes Russia, and we need to spend more. Hayes said his company is interested in a share buyback program to use some of their $10 billion in cash and increase value for shareholders.

Let's check to see how the charts are looking.
In this daily bar chart of RTX, below, we can see that prices broke lower Tuesday despite a good earnings report - not what fundamental analysts would expect. Prices are below the declining 50-day moving average line and the declining 200-day moving average line. RTX is now in a position to test and probably break the lows of the past three months.
The On-Balance-Volume (OBV) line has been weak since early May and was probably the "tell" that prices would move lower.
The Moving Average Convergence Divergence (MACD) oscillator has been hugging the zero line since July.

In this weekly bar chart of RTX, below, we find a bearish picture. Prices are below the declining 40-week moving average line.
The weekly OBV line shows weakness into July and then only a limited recovery. Long periods of aggressive selling are not good.
The MACD oscillator has been in bearish territory since March and is still negative.

In this daily Point and Figure chart of RTX, below, we can see that the software
is projecting a downside price target in the $51-$50 area. 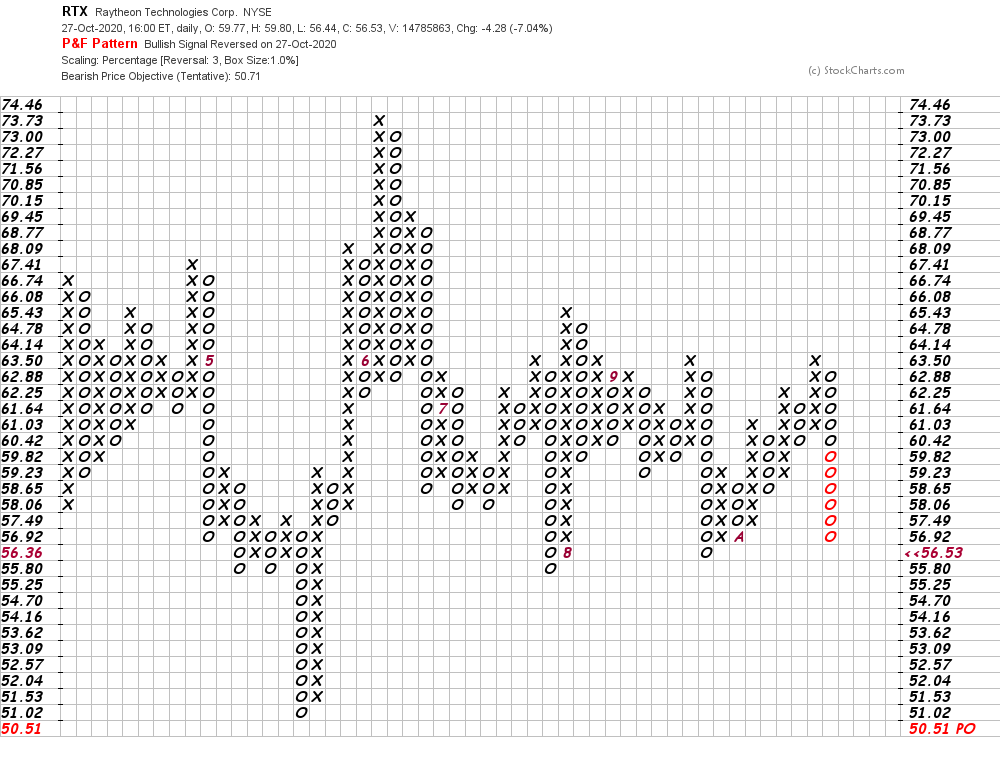 Bottom line strategy: Markets are discounting mechanisms so it is never a good sign when a stock declines on what appear to be good earnings' numbers. RTX is technically weak. Avoid the long side.
Get an email alert each time I write an article for Real Money. Click the "+Follow" next to my byline to this article.
TAGS: Earnings | Investing | Markets | Stocks | Technical Analysis | Trading | Aerospace | Defense | Mad Money | Executive Interview

Traders are becoming skittish as the late-day selling this week leaves them wondering where support will develop.

The Early Bird Gets the Worm, but the Early Trader Might Get ...

... dumped on for making the wrong pre-market move. Let's see what investors should do with action before the open.

Let's Drill Down on the Indicators

Sometimes I just want to focus on statistics and indicators. Today is one of those days. So let's look at the new sentiment surveys and what they mean (and don't).