For Honor, For Glory

Just guessing from some of the messages that have reached me overnight, that a few of the good folks out there are now rattled. A number of readers are asking the unknowable, such as "Where is the bottom?" or "When will it end?" Gang, I've got some news for you. I don't know the answers to questions like this. I do however... know how to show up for a fight.

For those looking for actual guidance, I do know more than that. Environments like this hurt. We all know that the central bank has caused a lot of harm to both the economy as well as the marketplace. I have warned on that for months. Now, that is the condition. We can not look to the committee for help. They are not doing their homework. In addition, the probability of an escalation in the trade war with China is now being more fully priced into the tech sector, and even names with nearly no overseas exposure are being badly impacted on no news. Passive investment... anything but passive in nature. Technical support levels have failed as the "Buy the dip" crowd has taken a walk. Oh, and the global growth story is not quite there either.

Now, I also know something else, and this is really important because this is about you. Everyone gets knocked down. What is different about you is that you are as tough as these markets. Thinking about paper losses does you no good whatsoever. You are pragmatic. What matters is only what is. The only obstacle is the one to your front. What might have been? Let some fancy poet type worry about that crap. We worry only about how to best save our tail while not alarming the people that count on us. Now rise and fight. Let the hate build. Let the wicked know fear, for we shall not.

There was some actual strength across the Utilities and the REITs. That makes some sense as traders sought the protection of safe haven while traversing rough terrain. What does not line up with the story-line very well would be the performance of Gold. Unlike other market scares, investors have not looked to the yellow metal for solace. Delayed reaction? Do they not understand? Do I not understand? Even as crypto-currencies continue to collapse, the only alternative currency that human hands can actually hold merely can hold it's ground in dollar terms. Then again, the dollar has steadily increased in value versus a basket of dollar peers since April. My thoughts? Investors still need some gold. On the day that we hope never comes, gold will buy water. You'll need water.

While the Fed was mindlessly drawing liquidity out of the economy while simultaneously pushing short term rates up against long term yields, (If only someone would have warned them !!! This was not hard to figure out.) debt has continued to consistently grow... at the household, corporate, municipal, federal, and even global levels. What could possibly go wrong?

Anyone read Ray Dalio's interview at Bloomberg on Tuesday? "The whole world leveraged long." He's not wrong about that. "Late stages of this short-term business cycle." Without a more sentient understanding of how to manage monetary policy, without serious progress on trade, without a more responsible approach to fiscal policy, without renewed or sustained economic growth elsewhere, Dalio could be right about that too.

Tuesday morning, the Census Bureau will lay down data on October Housing Starts as well as Building Permits. Does anyone really see these numbers printing at anything close to impressive levels in the wake of a November Homebuilder Optimism Index that printed at it's lowest level in more than two years on Monday? In fact, it looks to me that this was the largest one month drop in headline optimism in almost five years. I mean if October went well for builders, they probably would not be miserable in November. Know what I mean, Vern?

Want more? Seventeen consecutive months of increased household debt. Increased student loan debt. Increased auto loan balances. Increased credit card balances. Some folks my age scoff at 5% mortgage rates. Time for us to get off of our high horse. These younger folks grew up in a tougher economic time than we did. Stop pretending that they did not. Five percent is an awful lot if it's the highest rates that you have ever seen, you already have some debt, and you were raised in an era where your parent were forced to forgo things like heat and electricity. Remember, personal debt was much smaller "back in the day". Our parents did not have credit cards, we barely used them ourselves, and borrowing to further one's education was not really a thing just yet. As a youngster, I had heard of people going away to college, but honestly... I had never met one until I already worked on Wall Street.

By now, we all know that reports of iPhone production cuts have put the whammy on not only Apple (AAPL) , but a bevy of semiconductor names as well. The news on Monday was that Apple had cut intended production for all three current models, and according to the Wall Street Journal, had cut orders for the iPhone XR twice just in October. The headline stock led the Monday retreat for the tech sector and for the major indices as well. Yes, I am still long Apple. Yes, the company did sort of signal this in the earnings call when the announcement came down that the firm would no longer provide unit sales figures for hardware sales. They also did guide the revenue range for the current quarter slightly lower.

On the bright side, there has often been negative news around new launches. In addition the firm is driving an ever increasing portion of it's revenue through the sale of subscription services, and that is a significant positive. Not every analyst has yet weighed in, and the drumbeat of negativity had started earlier this year. My thoughts on Apple are the following. I do still want to own the greatest consumer electronics company (perhaps the greatest company) of all-time. I would bless a sale for an investor that may have allowed him or herself to become overly exposed to this name. One thing that I think investors of this era do need to improve on is balancing a portfolio. The skew in recent years has been toward growth, and younger investors may have misinterpreted the group's past performance as offering a perception of safety. Again, this can be blamed directly on perverse monetary policy. 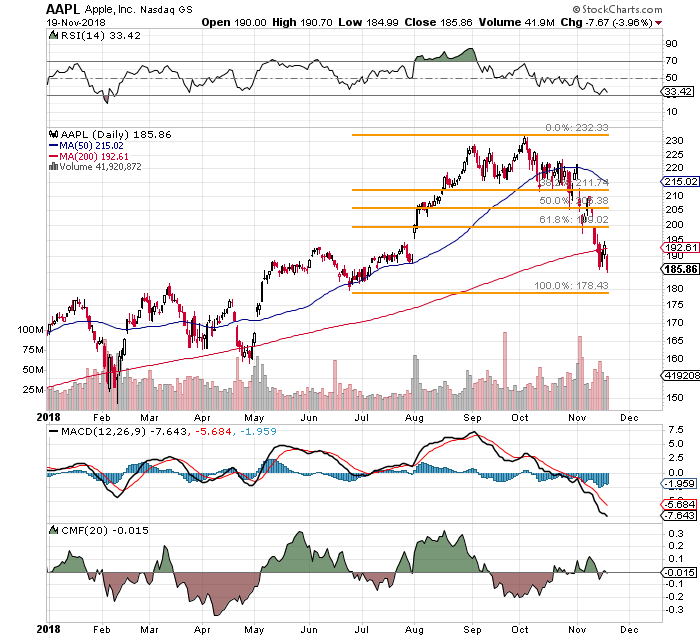 On a year to date chart, the $180 panic point that I had given you a few weeks ago is still the story. For me that level is probably an add. Yesterday, the lower low for the equity coupled with a higher low for Relative Strength could technically provide for today's trade a bullish divergence. From my perch at zero-dark thirty, the stock is still trading lower, but we'll see how this all shakes out soon enough. 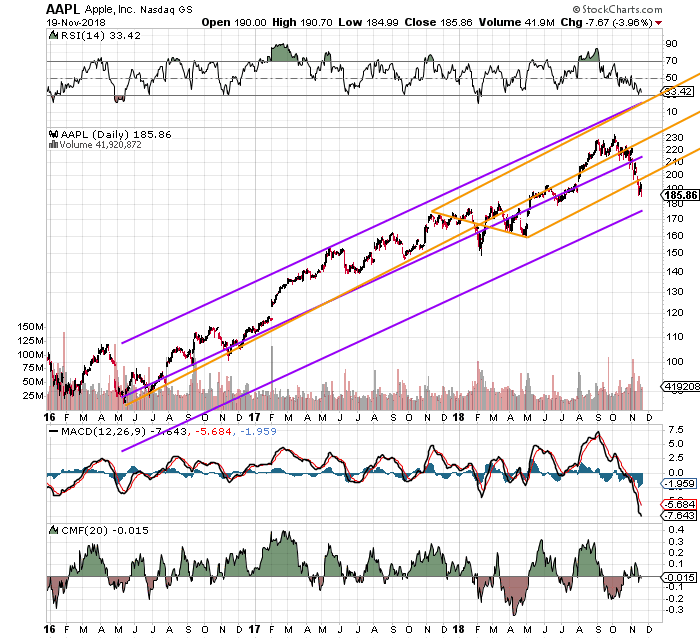 Now step back. The overhead view is more comforting. It would appear that trends going back three years may be unbroken. While a Pitchfork model covering that time frame does indeed show signs of being under pressure in recent days, a Raff Regression model contains the volatility over that time frame quite comfortably. Keep in mind, this stock is relatively cheap at 12 times forward looking earnings.

Apple will report Q1 earnings results on January 30th. Why not write a January 18th $200 call against your holdings. At one contract sold per 100 shares held, this puppy will still knock more than four bucks off of a trader's net basis. The risk associated? The trader has to sell the shares at $200 in two months. Worse things have happened to much better people. Sell puts? Not in this environment, Tex.

(Apple and Kohl's are holdings in Jim Cramer's Action Alerts PLUS member club. Want to be alerted before Jim Cramer buys or sells AAPL or KSS? Learn more now.)