Griffin said that after talking about 5G wireless for years, the revolution has finally come. Skyworks has enough capacity to meet chip demand, he said, and are working to mitigate any shortages.

Looking at the big picture, 5G is still in its infancy, Griffin added. Thus far the industry has only shipped 220 million 5G-enabled units. This is a multiyear move that will translate into billions of units. Skyworks, Griffin said, is in a position to do a lot more innovating in this space.

We last looked at SWKS on January 29 and wrote that "Friday is likely to be a strong session for SWKS. Expect a new high close. Longs should raise stop protection to $153 and price targets to the round number of $200.

Let's check and see if the recent price action has changed the picture.

In this daily Japanese candlestick chart of SWKS, below, we can see a bearish candlestick reversal pattern over the past three sessions. This could mean we see a sideways trend bounded by the $185-$190 area on the upside or we could see prices correct lower. Either move is a reversal using this eastern charting technique.

The On-Balance-Volume (OBV) line shows a recent turn to the downside and the Moving Average Convergence Divergence (MACD) oscillator has begun to narrow. This fits is with a candlestick reversal.

In this weekly Japanese candlestick chart of SWKS, below, we can see two large upper shadows above $180 telling us that traders have rejected those highs.

The 40-week moving average line is positive and the OBV line is bullish. So too is the MACD oscillator.

In this daily Point and Figure chart of SWKS, below, we can see both a bullish price target of $253 and that a trade at $173.49 could weaken the picture. A trade at $189.74 will refresh the uptrend. 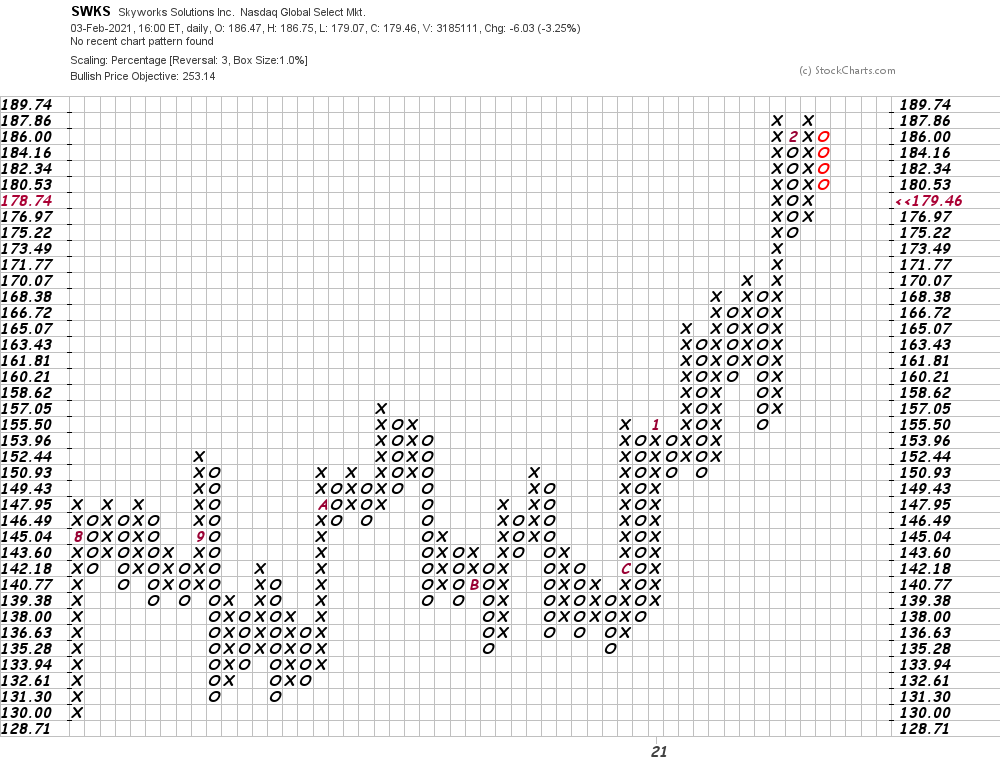 Get an email alert each time I write an article for Real Money. Click the "+Follow" next to my byline to this article.
TAGS: Investing | Stocks | Technical Analysis | Trading | Semiconductors & Semiconductor Equipment | Technology | Mad Money | Executive Interview