Smith commented on Qualtrics passing the $1 billion revenue milestone by saying that it was an amazing moment for him as a founder. When you're sitting in your basement, all you want to do is build software that people will love and use, he said, and that's clearly what the company has built.

Serafin noted that this was the fourth consecutive quarter of accelerated revenue growth, which is a testament to customers building and expanding on the Qualtrics platform. He said they are managing the company for growth, but also remained disciplined in its outlook and forecast.

The last time we looked at the charts of XM was back on April 22 and we liked the charts, writing, "Aggressive traders who are comfortable trading relatively new issues could go long XM around $36. Risk to $30. Our first objective is $40, but if the charts live up to the fundamental story we should see further gains in the weeks and months ahead." Prices managed to rally to $49 but began to decline around early November. Hopefully, traders nailed down their profits.

In this updated daily bar chart of XM, below, we can see that over the past three months prices have sunk to new 52-week lows breaking below the April-May lows of last year. The slopes of the 50-day and 200-day moving average lines are negative.

The On-Balance-Volume (OBV) line made a bullish rise from May to November but has since declined telling us that sellers have been more aggressive since early November. The Moving Average Convergence Divergence (MACD) oscillator is bearish.

In this weekly Japanese candlestick chart of XM, below, we see a mixed picture. Prices are in a downtrend as they trade below the declining 40-week moving average line. The weekly OBV line is pointed down and the MACD oscillator is bearish.

On the plus side the latest candlestick pattern is a doji and price strength this week could confirm a bottom reversal pattern. This might be a low and bounce but it is not necessarily a bottom. A bottom is a process that will take time.

In this daily Point and Figure chart of XM, below, we can see a downside price target of $22. 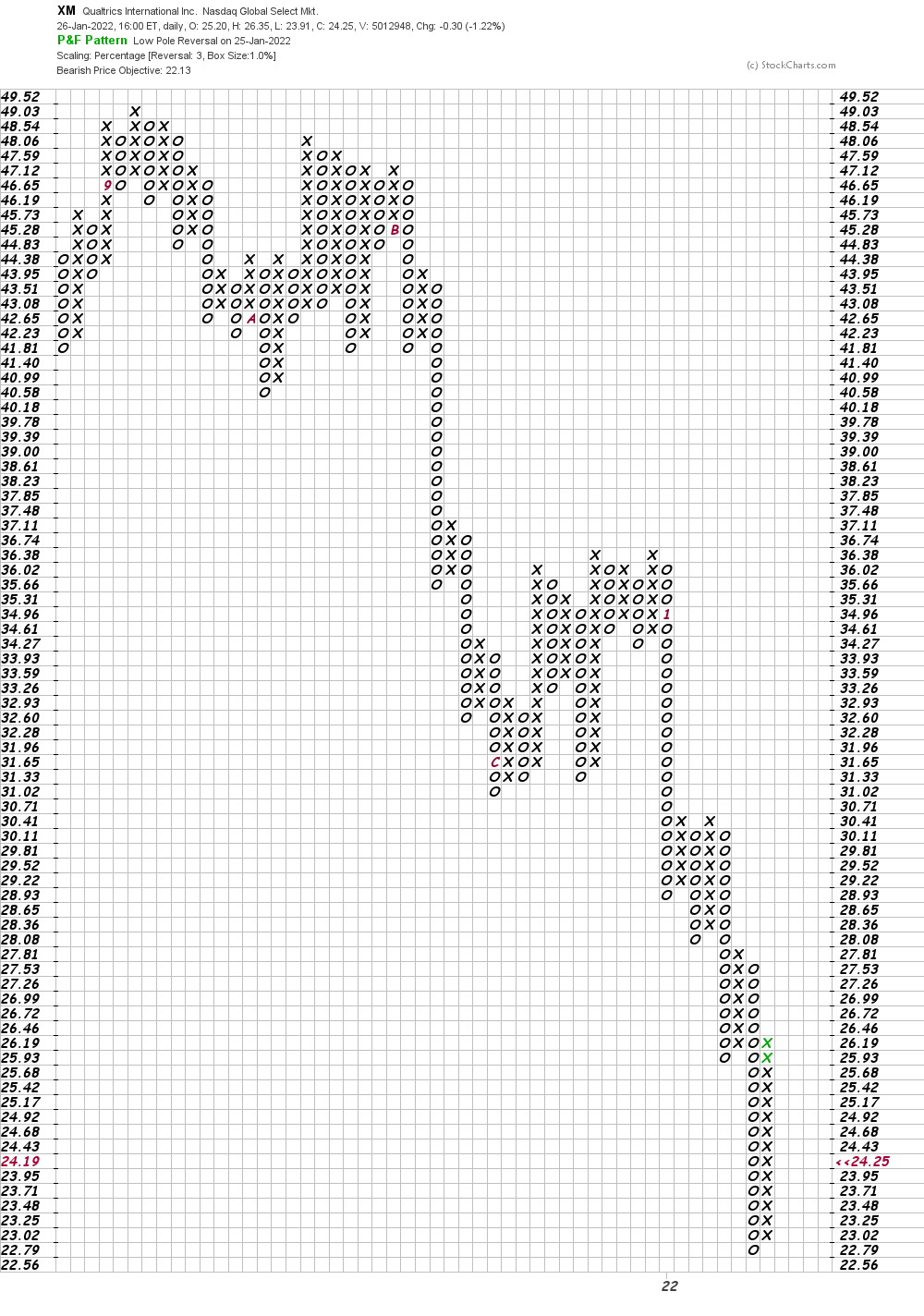 Bottom line strategy: In the short-run the price of XM could bounce to the upside. In this current market environment I do not expect this bounce to travel very far and probably will not last too long. This could be a low and the start of a new base pattern but XM will need to prove itself. The fundamentals sound interesting so keep an eye on this name and check back in a few months.

Get an email alert each time I write an article for Real Money. Click the "+Follow" next to my byline to this article.
TAGS: Earnings | Investing | Stocks | Technical Analysis | Trading | Software & Services | Mad Money | Executive Interview