Creeping forward slowly. Inch by inch. Forehead pressed into the soil if need be. Careful. Not a noise. Need to move more quickly. Up just a bit. Grass in socks. Socks over boots. Soft jog. No tracks. No broken twigs. Look to the left. Looking right. Danger stalks this night. Or does it? Who stalks whom, once hunted becomes hunter?

The US dollar index has poked itself below the 97 level, as it had on Thursday. Equity index futures markets are now benefiting from a "risk-on" spirit that had already permeated across both Asian, as well as European equity markets, not to mention much of the commodity complex.Take 'em? So, it would seem. Sentiment? Bugler...

So, it is that battle for control over price discovery is waged. Between the optimistic forces that see economic recovery ahead of expectations and those that see the potential for a subdued pandemic-based reality less than fully priced in. The two sides see these alternative realities through the very same prism of data that you and I look at ourselves. This is why we do the things we do, why we attempt to capture outperformance with segments of portfolios left most exposed. Why we also take care to hedge ourselves even at expense (only if we must) against worst case scenarios.

The public health crisis appears to be spreading like wildfire, not just here in the U.S. but across several global hot spots. Still, domestically, the macro-economic data for June gives cause for encouragement. Labor markets are ahead of expectations as are manufacturing surveys. Clearly, there is no one out there that expected to see Consumer Confidence approach triple digits this early. Where can an equity market go that has already gone 30% higher for the Nasdaq Composite, and roughly 20% higher, for the S&P 500, just for Q2. I am sure most readers noticed U.S. equities though, having traded higher for the session did selloff quite sharply into Thursday's closing bell. That said, the Thursday session as might be expected ahead of a holiday, did not bring much in the way of trading volume. 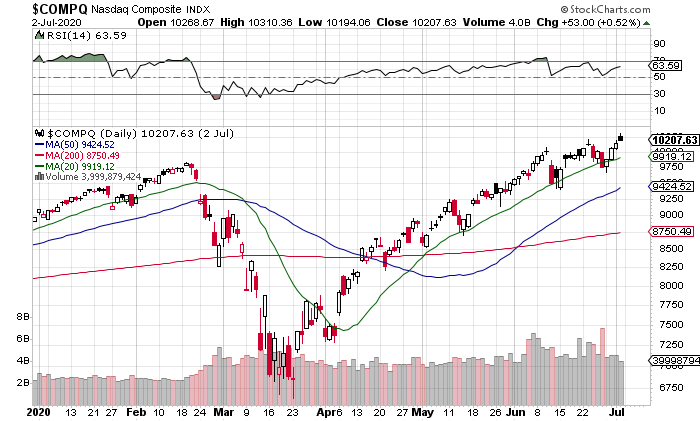 Readers will quickly note that the Nasdaq Composite, quite incredibly no longer gives the appearance of moving sideways as until just a few days ago, it had since the selloff of June 11th. Interestingly, the S&P 500 even after the rally over the past few days, offers no such overt change in trajectory. At least not yet. Even that said, upon weakness there is now a lot of wood to cut above the 3,000 level as the 50 day SMA closes in on its 200 day sibling. 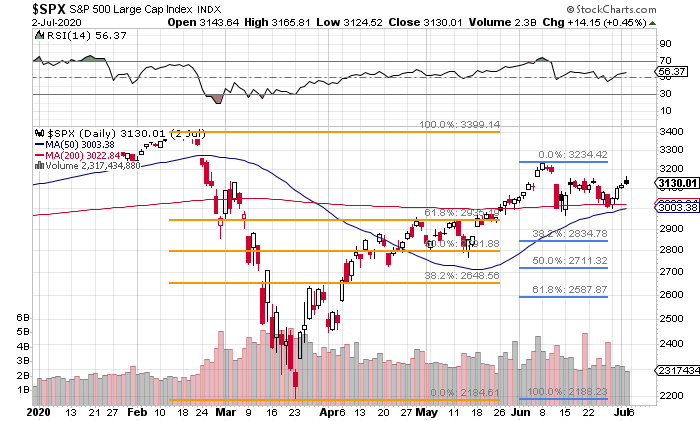 Is This An Earnings Story?

Quite frankly, I just do not know. This may be. Nobody is talking much about Q2 earnings, as most are looking far beyond. S&P 500 earnings for the quarter are now expected to show a year over year decline of more than 43%. As equity prices have rebounded from where they were or at least held the levels attained, 12 months ahead forward looking valuations have come within an eyelash of 22 times. What if the market is simply pricing in a quarter that had already been priced out?

What I mean is this. What if Q2 earnings, at least across a number of sectors are still awful, but less awful than feared? That would adjust this forward looking PE, no? The macro has been better than thought. Even as the coronavirus spreads, and several highly populated states show signs of moving back into the shell of mitigation, the numbers for the second quarter may substantially outperform the lowest expectations that I have ever seen. In theory earnings are supported by cash flows. Perhaps, just maybe, there was more organic velocity in transaction for the quarter than many realize. Just an idea. Keep in mind also, that it will be difficult for most corporations to disappoint, and few have offered the kind of positive guidance that would have investors second-guessing leadership.

We all see a great June jobs report. We all see reasons to poke holes in that performance. We all see Initial Jobless Claims that refuse to tail off more quickly. We all see Continuing Claims that appear to have stabilized at elevated levels. More "temporary" layoffs have moved into the "permanent" column. State and municipal governments are out of cash, and must either borrow heavily or reduce payroll, somewhat immediately. Economists at Goldman Sachs have revised their expectations for full year economic growth lower, from -4.2% to -4.6%, largely on a reduced expectation for just how robust the Q3 snap back might be. That said, these same economists reduced their year end projection for U.S. unemployment from 9.5% to 9.0%. What does it all mean? Did I claim to be a wise man?

Or optimism? Over the weekend, the Wall Street Journal ran a story of interest. This story presents as a cautionary tale as a number of companies developing vaccines meant to combat Covid-19 are now at the point where tens of thousands of healthy volunteers are required to get these vaccine candidates to the finish line. The problem is that ideally, these plans call for Phase 3 clinical trials of 30,000 patients, and several of them are trying to launch these trials this summer. The trick is to recruit a diversified enough crowd, so that efficacy and safety concerns might be accurately identified, while also drawing enough of these volunteers from communities where they are also likely to be exposed to the virus, so from locales where to be blunt... "Pandora's box" has already been opened.

Typically, for those who maybe do not trade often the pharmaceutical or biotech space, when a candidate goes into clinical testing, it must pass muster across several phases, and then move on to the next phase. Due to the urgency involved with this pandemic. those drugmakers that appear to be in the lead toward getting an effective product across the goal line the soonest are trying to execute a number of steps to include outsized manufacture of the candidates in parallel, or in plain English... at the same time. Usually, Phase 1 is small and deals more with safety issues. Phase 2 moves the focus more toward efficacy and usually involves hundreds of volunteers. Then comes Phase 3. This is the really important clinical step that includes data from thousands of patients and involves all facets of both safety and efficacy. After that, regulatory review and a Phase 4 monitoring of performance in the real world.

Moderna (MRNA) had appeared ready to go into Phase 3 on July 9th. This has been delayed, but is still expected to kick off in July, as is the effort being collaborated between Pfizer (PFE) and BioNTech (BNTX) . Next month brings the candidate being developed by the University of Oxford and AstraZeneca (AZN) , and the next month, Johnson & Johnson (JNJ) . Each of these trials calls for the inclusion of 30,000 individuals. The article implies that recruitment could be an issue, as at least 120K healthy patients not yet exposed to the virus, but willing to expose themselves to experimental vaccines who present as genetically diverse, but also live in areas susceptible to broad community spread are required. Concern? Or maybe cause for optimism that at least four efforts seem to be this close. A return to normalcy may not be that close. Something better than we've had might actually be. Better is good enough. For this moment in time. It's a race for the human race. Time for hope. Time for prayer (at least for me) for 120K brave souls.

There are no significant quarterly earnings releases scheduled for today.

Get an email alert each time I write an article for Real Money. Click the "+Follow" next to my byline to this article.
TAGS: Earnings | Economic Data | Economy | Investing | Jobs | Markets | Stocks | Technical Analysis | Trading | Coronavirus