So much. Really. So much to take in. So much to weigh. How to mold all of this input into responsible output? Equity markets did finally (in reality this selloff has been deeper than it had been lengthy) return to shareholders a positive week. The S&P 500 scored a 10% increase over five days, despite surrendering 3.4% on Friday. Analyzing even just that little bit of information does not reveal all that much. Sectors that led the way higher last week were strictly defensive, revenue provider type groups such as Utilities and REITs. That would appear to be to some degree an overall market negative. That said, the very reason that I gave you on Friday morning for not trusting Thursday's (lack of trading volume at price) rally, also presents as a reason for not really trusting the risk-off trade on Friday. Trading volume on Friday, even with a weekend's worth of dangerous headlines potentially looming, and even with the weekly expiration of at least some options type derivative products, fell off from the day prior at both of New York's primary exchanges, as well as in aggregate across constituent member names for the S&P 500 and the Nasdaq Composite. In fact, S&P 500 associated trading volume on Friday ended the day just 4% above the 50 day (trading volume) simple moving average for that index. The last time that S&P 500 trading volume printed that light relative to its own 50 day line was back on February 19th, which is also the day that the index peaked.

Of course any positivity that came out of last week, was nearly all centered around, at least here in the U.S., the combination (or shall we call it the "blurring"?) of both monetary and fiscal response to the immediate challenges that are presented by the mandated shut-down of the entire economy. Still so many questions. How much more can the Fed do? Even as the package that was passed last week will be successful in injecting cash where needed, for now, will it reach those needs in time? Rents are due for most people this week. Bills are due as well. For households, for businesses. Now, President Trump has taken the advice of his medical team and extended the guidance to socially keep our distance from one another for an extra 30 days. Most sentient being had understood that reopening the economy by Easter had been a wish-list item, and the growth in confirmed cases of Covid-19 not just in hot-spot cities, but really everywhere, made such an effort impossible.

Overnight, domestic equity index futures markets have really been all over the map in response to this news, as well as open intention from every corner of the planet to provide monetary and fiscal support to their entire populations. The most overtly negative signal (aside from the ECB having asked European banks to preserve capital by not paying dividends through October) that I see hours before markets open on Monday morning would be in crude prices. Front-month WTI Crude futures appear to have been putting up a tremendous all-night battle at the $20 support level. We see this support wane going into the opening, and we'll see a negative algorithmic reaction across equities. This support holds, and equity markets "might" as well. An oil price war between the Saudis and Russia at a time of an absolute precipitous decline in global demand for energy provided by fossil fuels seem to have been a miscalculation of incredible magnitude.

My real thoughts going forward will swirl around the next fiscal package that will have to get through our legislative branch and what this package will look like. The longer that it takes to restart the economy, the more fiscal support will be required in order to prevent a broad collapse into public poverty. Make no mistake, nothing we do here should be termed stimulus. Oh, there are aspects of what has been passed that could provide stimulative economic result at some point, such as small business loan forgiveness, but until that day we are just trying to prevent calamity. Phase four is real, will likely just start at the level ($2.2T) where Phase three left off, and will have to include something provocative of "risk on" behavior while extending the lifeline of sustenance to those unable to earn in this environment. There will almost certainly in my opinion have to be some flexibility on the supply side of residential markets that will result in lower rents and property valuations.

The big U.S. banks, such as JP Morgan (JPM) , Citigroup (C) , and Wells Fargo (WFC)  , will go the tape in two weeks with their first quarter financial results, leading off an "earnings season" that will not look anything like what investors had expected just a month ago. According to FactSet, S&P 500 earnings for Q1 are now expected to post year over year growth of -5.2%, versus projections of roughly +4.4% as recently as New Year's Day 2020. Though earnings projections have come in for every sector, it would appear that such essential business types such as Utilities, Health Care, and Communication Services will still grow earnings even if not close to what might be considered to be the original view. Earnings expectations across Materials, Discretionary, Industrial, and Energy names all look to be quite tragic (-20% plus) as non-essential demand has completely dissipated.

By the way, and still sticking with the numbers provided at FactSet, Q1 looks like a walk in the park compared to Q2. At this point, to be honest, earnings estimates might be about as accurate as shooting hoops while wearing a blindfold. Estimates for the S&P 500 for the second quarter are for earnings growth of -10%, and then if this infection actually does abate... will find some support later in the year. After last week's positive performance for equities, as well as this bevy of reduced expectations for earnings, the S&P 500 trades at 15.5 times forward looking (12 months) earnings. This lines up as cheap versus a five year average of 16.7 times if investors buy into the idea that having no economy is temporary. Personally, I do believe that having no economy is temporary. I also believe that what comes out on the other side will be smaller, far less global, and will evolve in ways both predictable as well as not so predictable as will have people's habits and preferences.

Answer me this. Who really thinks they'll be comfortable anytime soon in a crowded theater? Stadium? Restaurant? Especially, if one might not be so healthy to begin with, which accounts for a lot of folks, and most family units. Shoulder to shoulder at a show and the guy next to you has a coughing fit. Yeah. I don't think so. Tourism? How about theme parks and cruise ships? I won't be the first guy. I'll tell you that. Then there's squeezing onto a crowded commuter train and getting to work on time? No brainer. Until now. Then again, as corporations figure out that not everyone needs to be, or even should be centrally located, the entire urbanization of human populations could unwind to some degree, as white collar employment probably becomes more remote on a permanent basis.

Of course not. Want to create actual panic? That's how.

In addition to increasing the size and availability of every single program recently enacted (QE, Corporate Paper, Money Market mutual funds, Primary bond dealers, New issue and existing corporate bonds), the Fed may (will) have to provide funding to state and local governments as well as augment what the recently passed fiscal package does for small business. This is why Congress provided $454 billion to the Treasury Department to cover necessary risk taking on behalf of the central bank.

3) What to expect from month-end or quarter-end rebalancing?

Good question. I'm not sure. In theory, there should be a month end move into equities and out of certain debt markets. One would think, as many pension funds do have specific weighting mandates that require the reallocation of funds in order to maintain certain levels of exposure. That said, many of the large, global index providers such as FTSE Russell, S&P Dow Jones Indices, and ICE Data Services have made the decision to forego or delay updating many stock and bond indices as a way of reducing the forced movement of funds for investors compelled to shadow these indices. This Tuesday afternoon event could be a positive, or could evolve into a non-event. We'll know soon enough.

First? Any metrics related to the speed of the spread of Covid-19 across the nation. Second? Any talk of the next fiscal support package, as more help is probably now a given.

Late Friday, Abbott Laboratories (ABT) announced that the FDA had issued "Emergency Use Authorization" for a molecular test that is able to detect a positive coronavirus diagnosis in something like five minutes, and a negative result in something closer to 15. This test that will run on Abbott's "point of care" ID Now platform and can be used in nearly any healthcare setting, and will be available for use this week. The firm expects to be able to deliver 50,000 of these tests per day starting on April 1st, which is Wednesday.

As an investor, this was already a firm showing considerable strength in diagnostics prior to this, as well as in the treatment of diabetes. Even with a high enough debt-load to catch my attention, the firm has been a cash flow beast, and runs with a healthy enough (for this guy) current ratio. The dividend yield, at just under 2% is not exactly what I look for in this space, but that said, this is not really why one would be in this name. 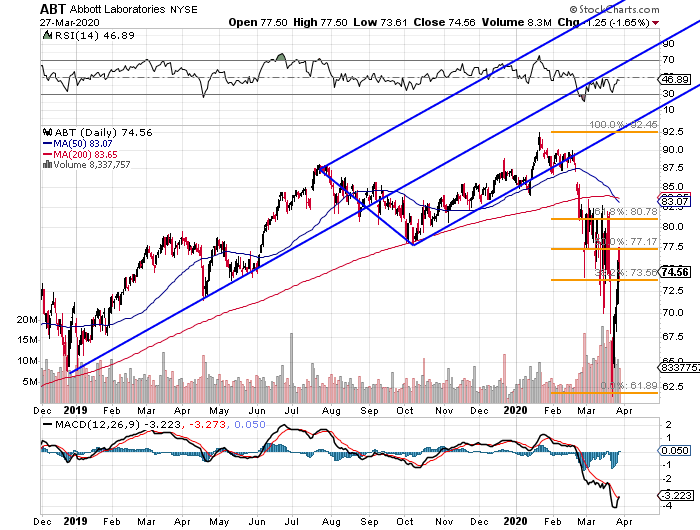 My thoughts on ABT, and I am in the name, are that these shares can actually get back to those pre-meltdown February highs. Regaining the lower trend-line of the Pitchfork may be a bit to ask, we'll worry about that later, and the battles to our immediate front first.

The shares hit resistance on Friday at the 38.2% Fibonacci retracement level above 77, and then sold off with the broader market. Retesting and taking that spot on this news would be crucial to the name's short-term performance. Then we'll have to deal with the "death cross" just handed down by the 50 day and 200 day SMAs, so no guarantees. That said, the daily MACD is poised for a bullish looking crossover on a higher open, and Relative Strength has returned to a neutral reading. My thought is that this name, even if it comes in from here, outperforms broader, less essential parts of the overall equity market.

Get an email alert each time I write an article for Real Money. Click the "+Follow" next to my byline to this article.
TAGS: Earnings | Economic Data | Federal Reserve | Investing | Markets | Stocks | Technical Analysis | Trading | Banking | Pharmaceuticals | Coronavirus

Unlike other space-related stocks, Redwire is already cash-flow positive.

Don't Underestimate the Power of Stagflation

The Fed might be proven right that inflation is 'transitory,' but after how much damage? Let's get out our Econ 101 books and review.

Alcoa Is Heading Much Higher on the Charts

Here are our two price targets.

Here's the Safest Way to Get Long Netflix Ahead of Earnings