By TIMOTHY COLLINS Nov 30, 2018 | 03:11 PM EST
Stocks quotes in this article: PVH
PVH ( PVH) came strong out of the gate on Friday after trading much lower after-hours on Thursday. Unfortunately, as the day has moved along, the stock has faded well off the highs. Now, bulls have to contend with the huge candle as potential resistance on any attempt to rally over the next week. There's some frustration in this action as it may take away what has been traditionally a solid trade.
The strategy for PVH on a green (up) close on Friday would be to buy the stock into the close and then look to sell it 10-13 days later. In fact, the last eight times PVH has closed green on the first day post-earnings, the stock has been higher 13 days later on six of those occasions. The average gain clocks in at 4%. The average loss on the other two times also hits 4%, but if I can make 4% six times and I lose 4% two times, I come out well ahead at the end of that cycle.
The long side still interests me here. One plus to the current PVH price action is the stop level is clear. If PVH closes under $107.50, there is no reason to own the stock. The current sideways action becomes nothing more than a bearish flag pointing to the sub-$100 level.
While the headlines read "Revenue Miss," PVH reported $2.52 billion versus estimates of $2.53 billion. $10 million is a rounding error when revenues are in the billions. The bottom line of $3.21 surpassed estimates of $3.14 and management raised FY2018 guidance. Previous guidance was $9.20-$9.25 with new guidance of $9.33-$9.35. Given the company reported a beat of $0.07, this new guidance now means PVH sees Q4 EPS at least in-line with previous estimates, if not better.
If, and it's a big if, but if the stock is set to close green today, it makes for an aggressive long-side play for the next two weeks. We've seen some decent two-week bounces from this oversold territory seen in the Full Stochastics and buying volume has increased two of the past three days. I would look at this one as a buy with a hard stop on any close under $107.50 and an upside target of $115-120. 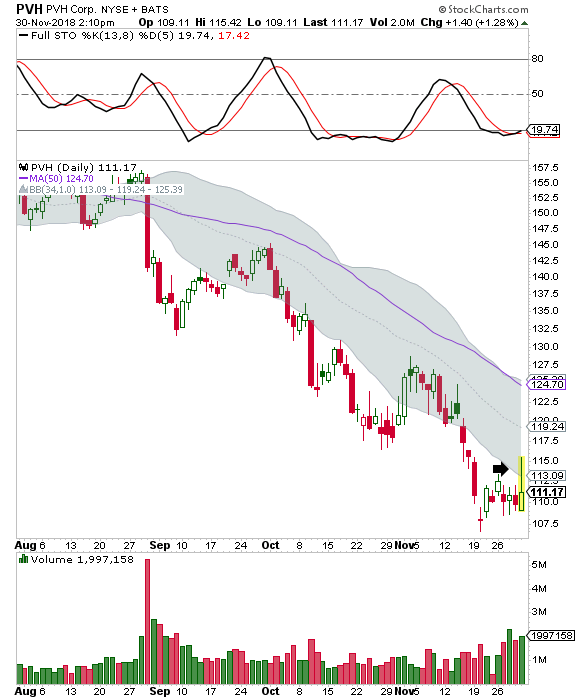 Get an email alert each time I write an article for Real Money. Click the "+Follow" next to my byline to this article.
TAGS: Investing | Stock of the Day