US lawmakers had become increasingly worried about a continued national reliance upon semiconductor chips manufactured in Taiwan and then exported to the US. The acute shortage that arose as supply chains choked off during and due to the pandemic made corporate America, US consumers, and US legislators keenly aware that there was a problem here. A problem that due to geopolitical concerns could potentially wind up getting much worse.

By August, the US would pass the CHIPS and Science Act that would provide $52B in loans, grants, and incentives including tax credits to build up and boost domestic production of these chips that literally everything that runs, runs on. That includes the high-tech world of national security.

The event will be to put a stamp of public approval on Taiwan Semi's now under construction $12B facility set to be fully operational by 2024. The plant will produce 4nm (nanometer) and 5nm sized chips for highly advanced applications such as artificial intelligence and machine learning. Even more important than this public stamp of approval, would be the fact that Taiwan Semiconductor will reveal plans at that time for a second plant in the state of Arizona that could very well bring TSM's overall investment in the state up to $40B.

Construction on the second site will start at some point in 2023, and the plant will begin producing in 2026. This second plant will produce 3nm sized chips, which happens to be the smallest "die shrink" available today. Just for a little background, 7nm was considered tiny two years ago and 14nm was considered nearly impossible five years ago. At the turn of the millennium, 180nm was the computer chip norm.

The fact is that TSM, or TSMC as the firm is referred to overseas, is the world's largest and most strategically important semiconductor foundry (manufacturer). Once these plants are both up and running, they are expected to run with a capacity larger than US annual demand for wafer fabrication of roughly 600k chips per year. How key will this be for the firm? For key designers/clients such as those mentioned above? For competitors such as GlobalFoundries (GFS) and Intel (INTC) ?

Taiwan Semi is set to report its fourth quarter late during the second week of January. Going back, the firm beat expectations for both the top and bottom lines with (after converting from New Taiwan Dollars) GAAP EP ADR of $1.79 on revenue of $19.23B. That was good for earnings growth of roughly 57% on revenue growth of 29%. Sales growth has not slowed for this chipmaker. The firm returned to highly positive free cash flow these past two quarters after one period of negative flow.

Glancing at the balance sheet from this past September, the net cash position dwarfs the debt-load. Current assets dwarf current liabilities even sans inventories. The firm definitely does not overdo it when making use of intangible assets to beef up the asset side of the balance. The firm has an extraordinarily high quality balance sheet.

I like Taiwan Semi. I think I like them even more now that they are going to produce right here in the US. Readers know that I am an AMD bull and usually long NVDA as well, not to mention AAPL. This will also secure military needs in case something stupid happens in Asia. The ADRs trade at 12 times forward looking earnings. They are not expensive.

TSM has not been immune to the flow of capital into and out of the semiconductor space. The firm does pay ADR holders an annual dividend of $1.87, yielding about 2.3%. That's better than decent. 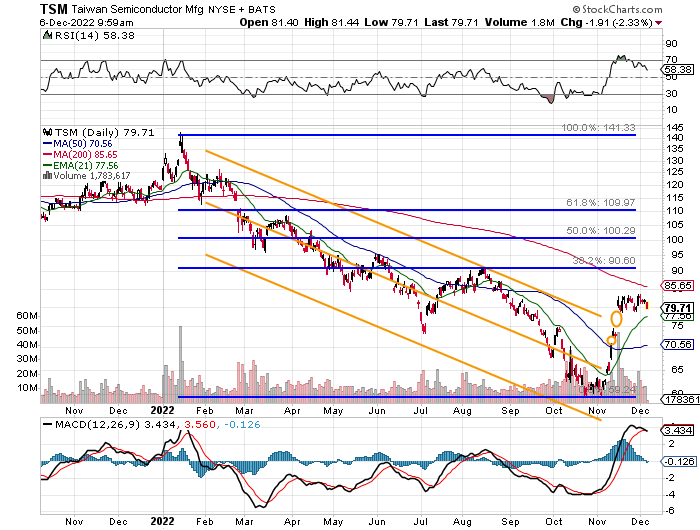 Readers can see that TSM had been mired in an almost year long downtrend. Let's zoom in for a better look. 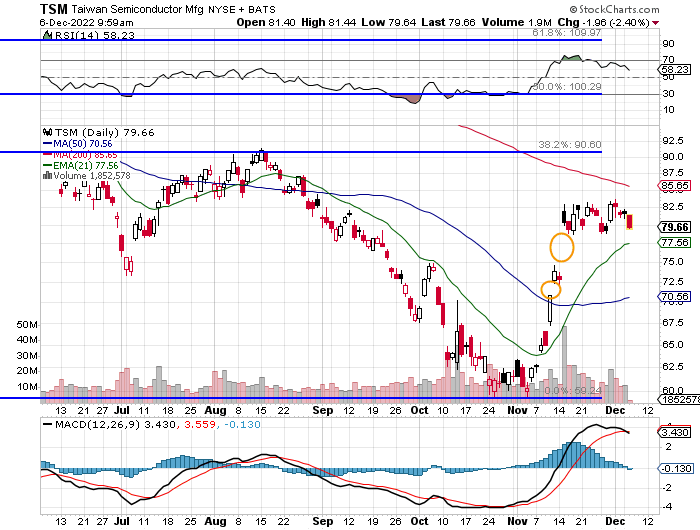 Readers will also see that these ADRs ran 40% between November 3rd and November 15th before trying to base. In doing that, the ADRs left four unfilled gaps in their wake. As much as I would like to see TSM reach over that 200 day SMA and for a 38.2% Fibonacci retracement of the entire year's move, I must also consider the likelihood that TSM will move toward filling those gaps.

I do not envision myself taking down an equity stake after a run like that with relative strength still elevated and a daily MACD that is starting to look a bit top-heavy.

A move down to $71 gets the top two and most noticeable gaps filled. A move down to that level could also permit the ADRs to find support at the 50 day SMA and then make another run at $83 resistance.

With earnings estimated to be due around January 13th, rather than buy the ADRs outright, I would rather sell the January 13th $73 puts for about $1.38 or the January 20th $70 puts for roughly $1.15. I preferred to go with the weekly January 13th expiration at first, but there is a better market for the monthly expiration on January 20th. Either one (or both) allow the trader to reduce net basis if forced to purchase the ADRs at these strikes. Otherwise, it's just found money in the premium sold.

If one is already long at least 100 of these, I think selling those January 20th $85 calls for about $2, might look pretty sweet.