In another "Executive Decision" segment of Mad Money Friday night, Jim Cramer sat down with Gary Steele, CEO of Proofpoint  (PFPT) , the cyber security company with shares that were up 43% for the year.

Steele said hackers have shifted from targeting infrastructure to targeting people. Proofpoint helps prevent a single hacked account from compromising entire networks. Steele added that in the era of cloud computing, many companies need to rethink their security strategy.

Previously, companies needed to protect their perimeters, but now with the cloud there are no perimeters.And in a world of global turmoil, threats continue to increase on a global scale. When asked what individuals can do to protect themselves, Steele advised turning on 2-factor authentication wherever it is offered.

Let's check out the charts and indicators to see what is offered.

In this daily bar chart of PFPT, below, we can see a number of trends with a mixed set of indicators. Prices turn lower from July and finally bottom out in November and December. A strong $50 rally ensues, including an upside price gap, but I have issues with the indicators.

PFPT rallies from late December to late April, but volume does not expand that I can see. Prices made higher lows in March and April, but they have weakened in May.

The daily On-Balance-Volume (OBV) line does improve from early January to late April, but it underperforms when compared to the price action.

The trend-following Moving Average Convergence Divergence (MACD) oscillator has been in a bearish configuration since it crossed to the downside in the middle of February, with a take profits sell signal.

In this weekly bar chart of PFPT, below, we can see a mixed picture. Prices have been unable to break above the $130 level for more than a year, and the "big picture" looks like a possible double top pattern. The weekly volume pattern shows turnover weakening from October, despite the price rise - not the strongest picture.

The weekly OBV line does bottom in December, but it has been stalled from February.

The weekly MACD oscillator has narrowed sharply and could cross to a take profits sell signal in the weeks ahead.

In this point and figure chart of PFPT, below, we can see a potential downside price target of around $107. 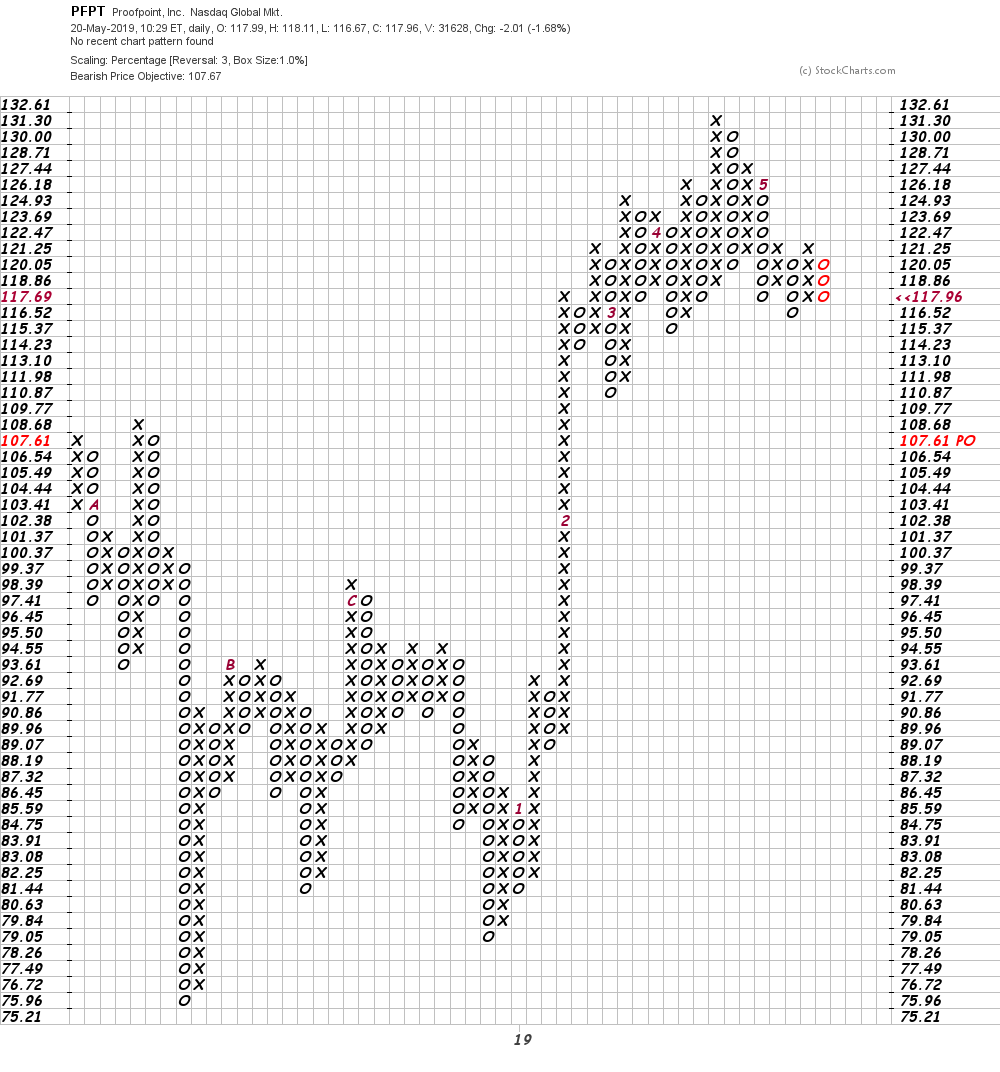 Bottom line strategy: Traders need to watch two levels on PFPT - the $115 level and then the $110 level. A close below $115 or below $110 will weaken these charts and likely precipitate further declines in the weeks ahead.

Get an email alert each time I write an article for Real Money. Click the "+Follow" next to my byline to this article.
TAGS: Investing | Stocks | Technical Analysis | Trading | Cybersecurity | Mad Money | Executive Interview