Been a while. Best year for annual sales growth since 2006. Longer ago than you think. For reference, Apple (AAPL) released the first iPhone in June, the next year. I speak of consumer staples giant Procter & Gamble (PG) . CFO Jon Moeller was blunt on Thursday morning. Moeller said, "On the whole, with health, hygiene and cleaning, consumers' needs have changed forever." Moeller added, "Maybe not to the degree that's happened recently. But it's hard to imagine we'll snap back to the old world." Have to agree. Really can not imagine going anywhere, or doing anything anytime in the future without a mask or gloves at the ready. Can't imagine not sanitizing credit cards, or almost immediately washing clothing worn in a public place prior to wearing them again. Laugh at this behavior? Only if somehow you have not been touched by this plague, and I truly hope that to be the case. Just looking at Procter & Gamble's numbers, I apparently have plenty of company.

The Quarter, The Year

For the firm's fiscal fourth quarter, Procter reported adjusted EPS of $1.16, good for annual earnings growth of 5.5%, and solidly beating expectations. Revenue for the quarter showed year over year growth of 3.5%, landing at $17.7 billion. This was also a nice beat.

Where was this growth in sales located within the firm? In Fabric & Home Care, of course. Organic growth for this particular unit (including such brand names as Tide, Mr. Clean, Dawn, and Cascade) printed at a whopping 14%, its fastest pace of growth ever. With organic growth for the entire firm printing at 6% (this is the number that was best since 2006), this unit was the only one to show growth faster than the firm in its entirety. All about cleanliness.

The segment labeled Baby, Feminine & Family Care grew organic sales an impressive 5% to be fair, and that would in normal times be quite impressive. Grooming revenue actually printed in contraction, as investors likely expected. Nowhere to go, nobody to see, no reason to impress. What I think is key to note this morning, and not really being mentioned, would be a 3% negative impact from foreign currency exchange rates. Going forward, this impact likely turns positive as the U.S. dollar has weakened considerably versus many of its peers, and PG has managed to keep manufacturing facilities open and functioning throughout the pandemic. The caveat there is that China is PG's second largest market, and the state of the Washington/Beijing relationship would have to be considered a risk at this point.

In addition, I think it noteworthy that investors see that both gross margin and operating margin did beat consensus and operating margin by quite a bit at that. On this matter, PG points to reduced commodity costs, as well as advantageous pricing in spots, that were somewhat offset by increased manufacturing and logistics expenses related to working around the pandemic.

Guiding investors toward fiscal year 2021 (the current quarter is Q1), Procter & Gamble is targeting organic sales growth of between 2% and 4%. Remember, this is building off of a very strong 6% in 2020. The firm acknowledges high uncertainty around the virus itself and the global economic fallout that it has created, with increased concern for the developing world. The firm is now looking for full year core earnings growth to land in quite a wide range spanning from 3% to 7%. 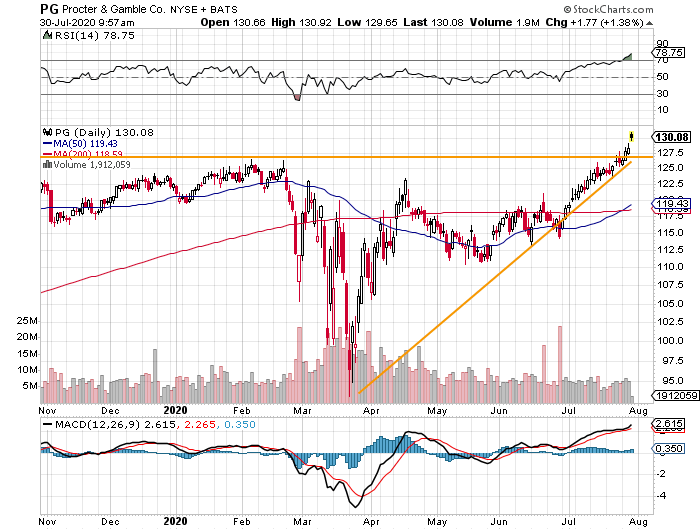 What an amazing chart. Really. Came very close to calling this a cup with handle pattern. I mean it's so easy to do, visible on nearly every single stock chart we look at this year. Only thing, from the February top to the March bottom, the shares were so volatile, that pattern (to me, at least) is just not there. This matters greatly for pivot point placement. If this is a cup with handle, the pivot would be around $123. If this chart shows an ascending triangle pattern, then the pivot becomes $127, and the stock has broken out this week. This thesis can be supported by a similar breakout in Relative Strength, as well as the daily MACD. Not to mention the very visible "golden cross", which for the new kids is what we call it when the 50 day SMA moves above the 200 day SMA. This is thought to be by some (including me) a fallible, but more accurate than not, bullish signal. Also for the new kids, this is the exact opposite of a "death cross", which we see as bearish.

Add: Not today, waiting for a retest of pivot.

Get an email alert each time I write an article for Real Money. Click the "+Follow" next to my byline to this article.
TAGS: Earnings | Economy | Investing | Stocks | Technical Analysis | Trading | Consumer Products

A Market Grappling With What It Hates Most

The uncertainty surrounding this election is unlike anything we have ever experienced before.

Now on My Radar: Shift4 Payments

The first glance of the business puts it in the right long-term category over the next five years.

Is It Time to Sell Seagen Shares?