The Chinese attacked Yudam-ni again that night, with even greater force than the night before. The 5th Marines and the 3rd battalion of the 7th Marines took the brunt of the onslaught, fighting until dawn when our Corsairs swooped in to help push the Chinese back. The pressure on Yudam-ni had grown more serious. Nobody knew how many Chinese soldiers were out there, waiting to let loose on us. We only knew that the hills around Yudam-ni were swarming with them.

On Wednesday morning I gave you two moving averages where I thought the S&P 500 might make a stand... the highly publicized 200 day simple moving average (2776), and the hardly ever looked at 40 week simple moving average (2769). I know that portfolio managers tend to act around the 50 day and 200 day SMAs, but algos are a little funkier than humans, and those that write them are directed by those who think themselves clever, and thus try to differentiate. Hence, why I wrote that yesterday morning, and why I repeated it on Making Money with Charles Payne later on.

Upon the close, both of those levels had been successfully defended, but the turn... the actual bottom was made just before noon at 2766, and again at 2769 when the spot was re-tested with an hour to go in the regular session. The overnight pajama crowd has tried to build upon Wednesday's late strength, and on the green open across Europe. However, I can take nothing away from the lackluster moves seen as black melts into a deep gray through my office window.

Hate 'em. The only good thing about rattlesnakes is that is you move slow enough, they tell you where they are. When there's too many of them, it does get confusing, but still far better than getting bit on the tail by a water moccasin. No warning there at all.

Markets have been impacted by changing conditions that, thanks to the nature of a 24 hour news cycle, produces headlines that most of the country will never read, and the rest will soon forget as attention spans dwindle along with generational cognitive ability. In short, very short, analysts now expect an earnings recession to become reality after negative Q1 growth, and ahead of projected negative Q2 growth. Slowing macro both here and abroad is behind this, as global economic growth becomes more problematic. This has been exacerbated by both a Federal Reserve that behaved as if the economy were bullet proof in 2018, leaving monetary policy still too tight for this environment, as well as the ongoing trade war with China. The profound fear has been that a prolonged, protracted Cold War develops form the trade war, leaving a semi-permanent dent in economic potential due to higher expenses across the board. On top of this, we must add the political turmoil that never seems to go away. Obviously, impeachment proceedings would not only damage the administration's ability to negotiate with foreign powers, there would almost certainly be a further slowing of corporate capital expenditures, forcing significant erosion upon everything from business confidence to GDP.

Most notably, and though representative of negative sentiment, often seen as a contrary indicator once extremes are met was the spike witnessed for the CBOE Put/Call Ratio. That number showed at 1.41 on Wednesday, the highest reading since last December, and well above Tuesday's 1.08. By the way, for this item ... both the 50 and 200 day SMA stand at less than one.

As one can plainly see, Wednesday's number here certainly lies at the extreme end of a one year range of distribution. The S&P 500 is still up 11% year to date, so you want to ask me if this one year illustration is valid for comparison purposes? I think it is. The S&P 500 is only up 2% over 12 months with four sectors in the red. On top of that, the 12 month period contains some wild volatility, so the answer to your question is yes.

For myself, I have been buying short term volatility in Tesla (TSLA) , and selling some volatility in Zuora (ZUO) , ahead of that firm's earnings this (Thursday) evening. That stock has simply been wild of late. The purpose was to drive net basis for my equity position even lower. My net basis for this name is now far below the low end of this stock's all-time trading range. We'll see what tonight brings, but I have plenty of wiggle room.

Apparently our adversaries in this conflict threaten to curtail exports of rare-earth metals that are critical to the manufacture of so many important products, from cell phones to electric batteries to fighter aircraft. Rare-earth metals are present in abundance just about all over the planet. Markets adapt. Give up the business of processing these metals, and that business is lost... forever. It has been mentioned that our adversaries might sell U.S. Treasuries in order to punish the U.S. One, that would be like cutting off one's nose to spite one's face. Two, we could use some help with the yield curve. Three, the rest of the planet is starving for yield. So, nice try.

One more thing. You may have noticed Lockheed Martin (LMT) bucking the market, sector and even industry trends on Wednesday. Why? Ever hear of the Bernstein Strategic Decisions Conference? It's going on in New York this week. Lockheed CEO Marillyn Hewson was present on Wednesday. She expects the firm to possibly sell as many as 4,600 F-35 fighter aircraft over the life of this airplane. The F-35 stealth fighter is the firm's top dog in terms of revenue generation. The various branches of the U.S. military have already planned to purchase as many as 2,400 F-35's. Japan has ordered 100 of them in an effort to upgrade that nation's defense capabilities. Japan is now the largest foreign buyer. The United Kingdom, South Korea, the Netherlands, Italy and Poland are all expected to place orders, while Spain, Romania, and Slovakia are all considered to be highly interested. Then there is the Middle East. Israel is expected to place an order, and according to Hewson... she expects that the U.S. government might look at releasing technology for export to the region, keeping in mind that exports to potential Israeli adversaries must keep in mind Israeli defense capabilities. (The higher count of orders also serves to drive down unit costs, improving margin.)

We already know that Taiwan would like to place an order for 60 upgraded versions of the F-16, also manufactured by Lockheed Martin. An adversary pondering the withholding processed rare-earth metals, might also want to ponder an increased number of Japanese, South Korean, and Taiwanese later generation fighter jets all flying around in the same neighborhood. Oh, and in a press call a couple of weeks ago, Admiral John Richardson, Chief of Naval Operations declined to say whether or not the USS Ronald Reagan would make a visit to Vietnam at some point this year. Just some food for thought.

You may have seen the call made by Pivotal Research analyst Michael Levine on Wednesday. Levine initiated AMZN with a Buy rating. That's not special. Of the 46 analysts covering the name, AMZN is 46 for 46. Levine placed a price target of $2,750 on the stock. The Wall Street average is $2,229. My own "pedestrian" target is $2,350. Though I love the firm, my panic point for this name is a round $1,800, and it has come close this week, so I may be forced by my own set of disciplines to take a little something off. That will not dampen my enthusiasm for what Jeff Bezos is doing here. 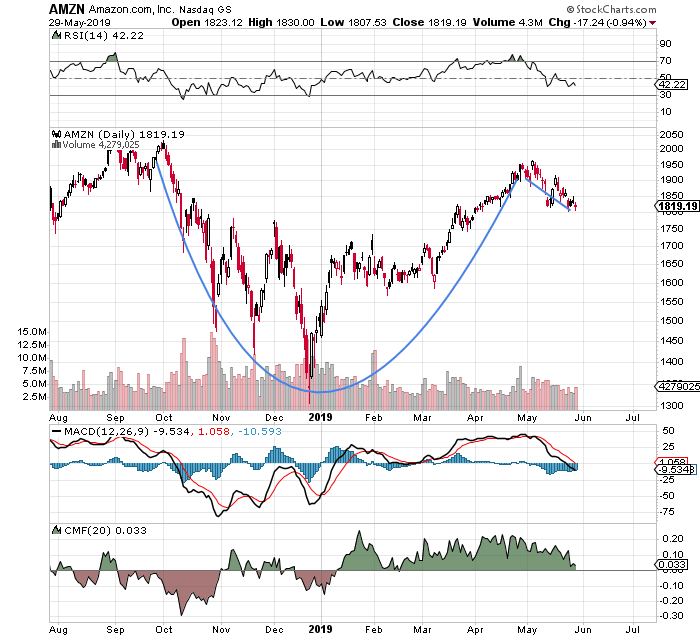 What do I think? I think the chart is still forming a handle to an eight month cup that provides potential for a slingshot effect should the obvious pivot point now way up there at $1,965 ever be re-taken. Day dreaming? Not in this name. The bottom of that cup is just above $1,300. Think about that. A depth of more than 35%. My target may be shy of where it should be, based on the technicals. $2,600... $2,700. Not crazy.

(Amazon and Microsoft are holdings in Jim Cramer's Action Alerts PLUS member club. Want to be alerted before Jim Cramer buys or sells AMZN, or MSFT? Learn more now.)

Get an email alert each time I write an article for Real Money. Click the "+Follow" next to my byline to this article.
TAGS: Economy | Investing | Markets | Options | Stocks | Technical Analysis | Trading | Defense | E-Commerce | China