Gelsinger recently took the helm at Intel after a self-described "11-year vacation" from working at the company. He said Intel is focused on execution, leadership products, innovation and rebuilding their culture.

Intel is taking a new, more collaborative approach to IDM, or integrated design and manufacturing, Gelsinger added. The new approach works closely with cloud providers to optimize chips and solutions for specific applications. Even small improvements, he said, translate into huge gains at scale.

When asked about building more chips in the U.S., he said it's critical that America reclaim its role as a leading manufacturer of semiconductors. Other governments are investing in technology, he added, and we need to invest as well.

We last reviewed the charts of INTC on April 12 and wrote that "INTC is trying to challenge its historical highs of 2000. I doubt if any investors have held onto those pricey longs for all these years so chart resistance is going to be psychological. INTC is down sharply Monday but if this weakness is short-lived then traders should buy INTC risking to $60. The price objective for now is $82."

In this updated daily bar chart of INTC, below, we can see that the price weakness on April 12 continued and now INTC is trading below the flat 50-day moving average line. The On-Balance-Volume (OBV) line has continued lower the past week or so telling us that sellers of INTC are more aggressive than the buyers. The Moving Average Convergence Divergence (MACD) oscillator has moved closer to the zero line and a possible sell signal.

In this weekly Japanese candlestick chart of INTC, below, we can see a mixed picture. The two weekly candles from the last week in March and the first week in April are not a bearish engulfing pattern. This can be seen if you "zoom into" the chart.

The slope of the 40-week moving average line is still positive and the OBV line only shows a dip so far for April - the longer-term pattern is positive. The MACD oscillator has narrowed a little but is currently far from a downside crossover.

In this daily Point and Figure chart of INTC, below, we still see a potential upside price target in the $82 area. A trade at $60.42 is likely to turn the chart bearish. 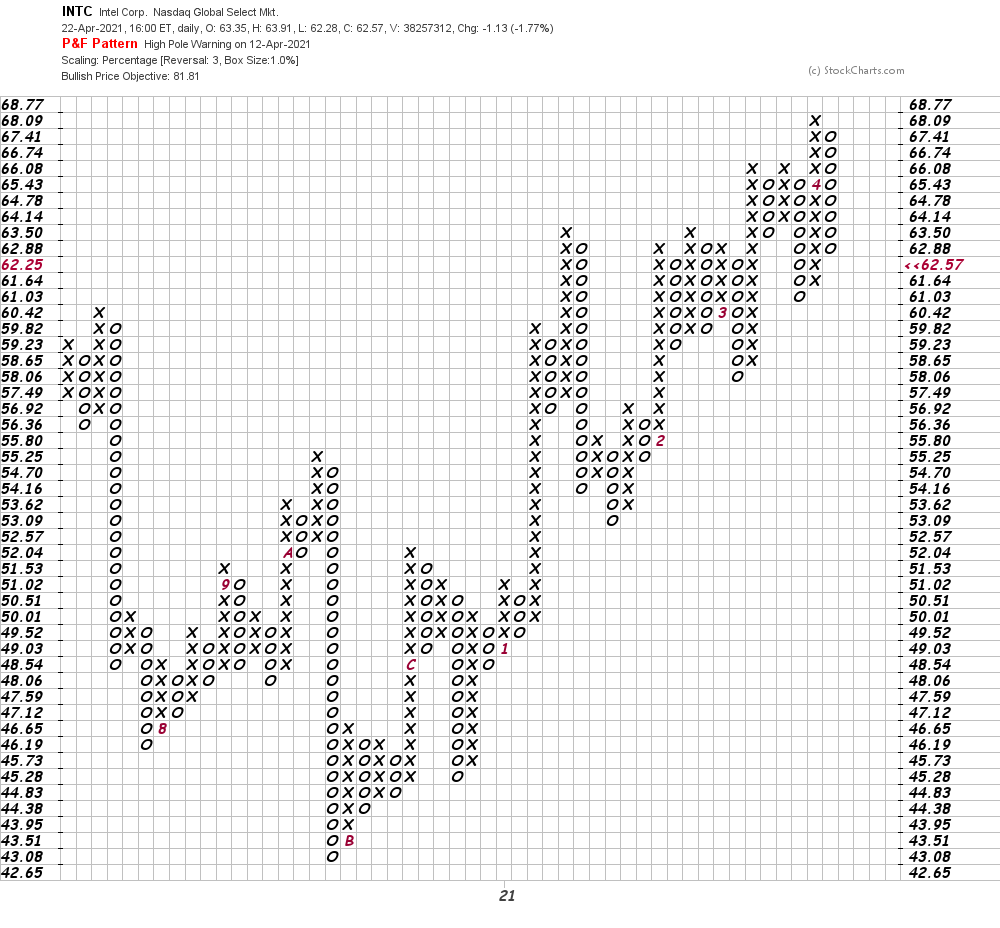 In this weekly Point and Figure chart of INTC, below, we used high/low price data. Here a downside price target of $58 is shown. 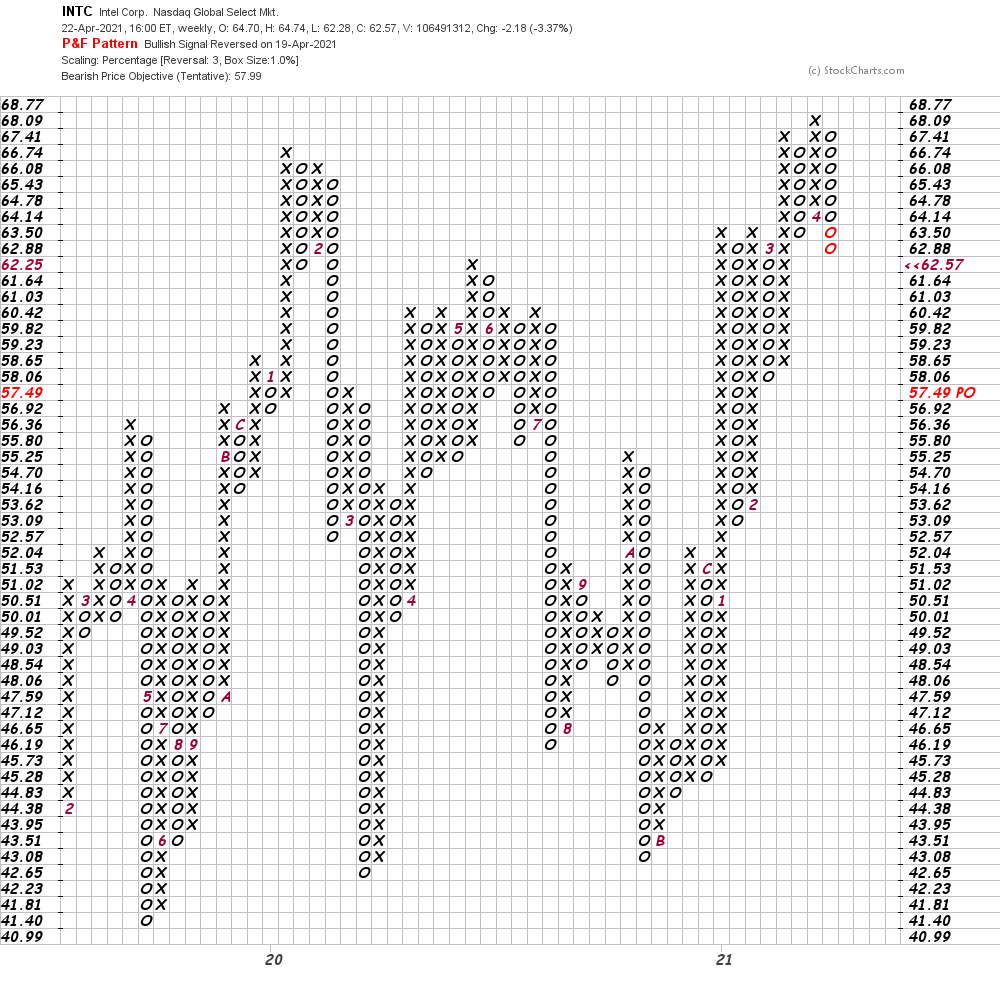 In this second weekly Point and Figure chart of INTC, below, we used close only price data. Here an upside price target of $78 is indicated. 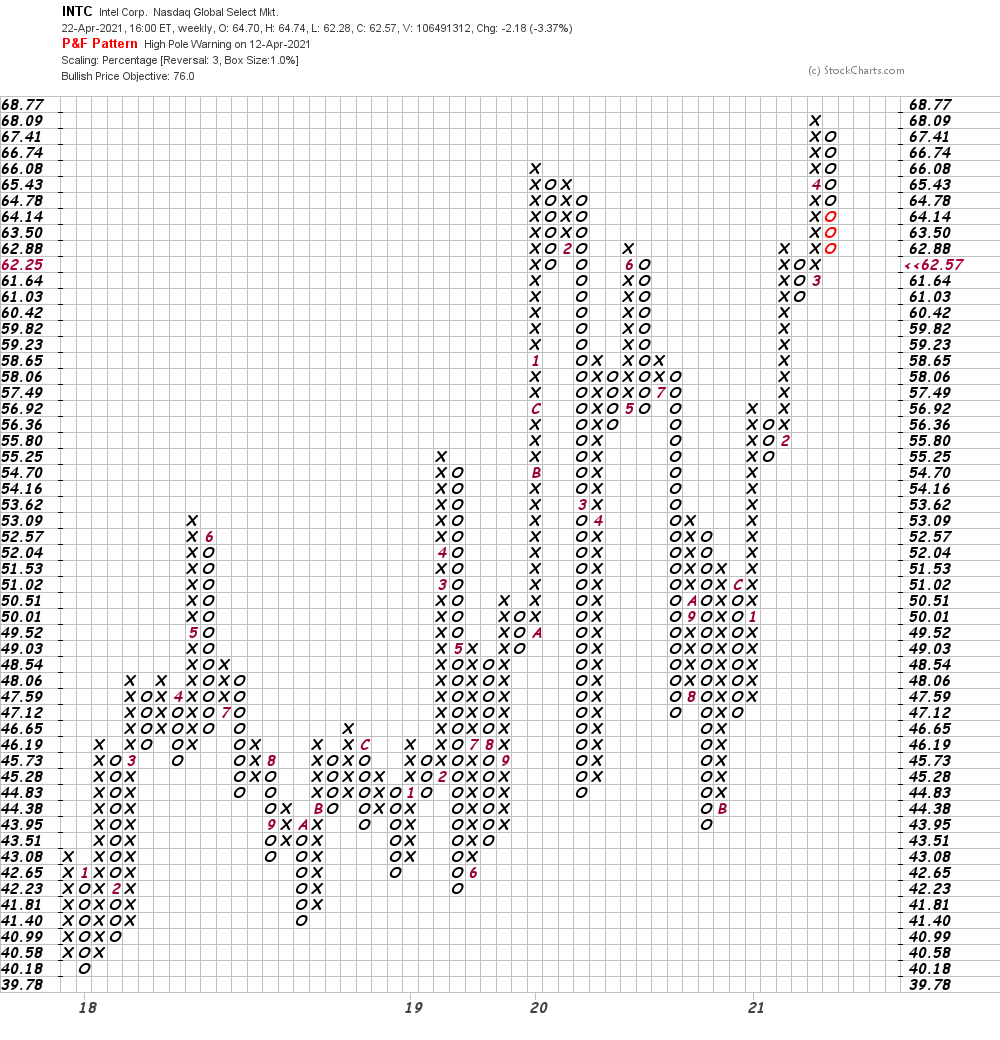 Bottom line strategy: The charts are mixed but I believe we may see support develop in the $62-$60 area for INTC. Traders should be prepared to go long INTC risking to $58.

Get an email alert each time I write an article for Real Money. Click the "+Follow" next to my byline to this article.
TAGS: Investing | Stocks | Technical Analysis | Trading | Semiconductors & Semiconductor Equipment | Technology | Mad Money | Executive Interview