Thursday. Strange day. Equities were more or less negative. The broader indices closed down small on increased, but still very thin trading volume. Breadth leaned toward the negative. The spread between what US two year and 10 year noted yield inverted very briefly multiple times throughout the session, as quicker and slower algorithms bounced off of each other on the equity side at the point of sale. The best word that I can think of to describe Thursday trade would "sloppy."

What inverted that spread on Thursday? My friends, if this act were not one that could end in tragedy, it surely would present as comedy. (Keep in mind that the arguably more accurate recessionary indicator, the 3 month/10 year spread remains badly inverted at -35bp). Straight from the "you can't make this stuff up" department... Kansas City Fed Pres. Esther George, widely considered to be a policy hawk, and currently a voting member of the FOMC, appeared on television. George told Bloomberg: "As I look at where the economy is, it's not yet time, I'm not ready, to provide more accommodation to the economy without seeing an outlook that suggests the economy is getting weaker."

Understand that from my point of view, easing is a technical necessity, and not directly due to economic weakness. I find it sad that grasping this concept appears to be beyond those who do need to understand. That said... Incredibly, and almost simultaneously, as George professed not seeing weakness in the economy, her own district, the Kansas City Fed went to the tape with perhaps the weakest manufacturing report they have produced in three years, posting a -16 for New Orders and printing a negative number for their production index for the third month in a row. Yup, no sign of weakness, Esther. Except, specifically in the district that you supposedly represent. I don't know... maybe try reading a newspaper, or look at some data. Call me crazy.

Philadelphia Fed Pres. Patrick Harker also came across as hawkish, or at least not dovish on Thursday. In his defense, Philadelphia has been perhaps the strongest of the Fed's 12 regional districts where as manufacturing surveys are concerned. In the nation's defense, Harker does not vote on policy this year. There was apparently not much mention of the U.S. Market manufacturing PMI Flash that hit the tape in a state of contraction for August. First time in a decade. The crew would rather focus on the U.S. consumer. At least the consumer has been strong. Recall that July Retail Sales ran 0.7% m/m. Hot. They know that Amazon (AMZN) isn't running a Prime Day event in August, right? They know that Walmart (WMT) and Target (TGT) aren't running similar events in order to compete, right? They know that non-store retailers (e-commerce) posted a July gain of 2.8% m/m, putting upward pressure on that headline 0.7%, right? They know that the BLS thinks that half a million less jobs have been created than previously thought, right?

The on again, off again, but always seemingly at least partial inversion of the US Treasury curve needs to be understood by Mr. and Ms. Main Street, for it is you who stand to be harmed by the arrogance of others. The pressure on the long end of the curve is often explained away as foreign investors pouring out of negative yield environments into one where they can find at least some meat on the bone. This is very true. To discount the potential implication, however is plainly reckless. When the two year note and the 10 year note yield roughly the same in percentage terms, known as a flat curve, the overt implication is that the bond market expects to see no growth, and little inflation beyond two years out to 10. Bring in the 30 year bond, yielding just 14 basis points more than 30 day T-bills, and the implication becomes terrifying for all who love their children.

Why would markets fear a flat to inverted yield curve? The plain answer is that this environment seriously crimps business investment. When future growth is questioned, new plants are not built. New markets are not expanded into. New jobs are not created. Existing employees at first do not see wage increases. Should the condition persist, payrolls are reduced. This is not rocket science. Everyone is capable of understanding this. Apparently, the average factory worker more so than a Ph.D Economist granted the responsibility of leadership.

Does this really mean that economic contraction is imminent? My opinion is that it does not need to. That said, no, or little growth is not helpful, and in this high tech world, driven by algorithms, all that is needed is a catalyst. This is also where psychology plays a roll.

Something understood, or even misunderstood as decisively negative that we don't see coming never happens to us, right? The world is much faster now that real-time decision making is not done by human beings. The inter-connectivity of systems, coupled with areas of investment exposed to heightened leverage create what is known simplistically as systemic risk. One can not begin to understand that they themselves can not become fully cognizant of exposure to this type of risk until one makes some kind of attempt to understand what is known as "Complexity Theory." It's not new. The complexity and interdependence of organizations has been growing for 50 years. So has the over-leverage, leaving the average investor in a weaker position to understand exposure.

According to EPFR Global, a total of $15 billion has flowed into bond funds of all types in just the week ended Wednesday. This, while the Financial Times reports that Hedge Funds in aggregate have seen net outflows of $56 billion over the first seven months of the year. In addition, the World Gold Council reports that investors poured a whopping $2.6 billion into gold-backed ETFs in July alone, the highest level of inflow into that type of investment vehicle in over six years. Investors are either highly dissatisfied, or preparing for something.

The problem for Fed Chair Jerome Powell as I see it, on Friday from Jackson Hole, is that he heads a group of central bankers who have recently, and very publicly displayed a glaring lack of consensus on just where the trajectory of U.S. monetary policy should be headed. You will hear the mindless on this day speak of not envying the Fed Chair, that he is in a tough spot. Oh, he may be in a tough spot, but understand this. He serves his nation at a high level. Who would not envy the opportunity or the honor of serving the flag under trying conditions? Who would not relish the chance to stand at the plate and go to bat for Mr. and Ms. America? You must love them to serve them, and you must serve them to lead them.

The Fed Chair's address this day will move markets. This we know. We also know that the ECB will likely launch an aggressively easier path for policy of their own on September 12th, six days ahead of the FOMC's planned meeting. The Fed can not control the long end of the curve. That belongs to the bond market, and the bond market is chock full of foreign money seeking positive yield. The Fed does surely control short-term interest rates. This is why the curve is inverted. The Fed has clearly misread the environment, while foolishly reducing the balance sheet simultaneously at the pace they did. Understand this... when the impact of quantitative tightening is accounted for, the four 25 basis point increases made to the Fed Funds Rate in 2018 is equivalent to six to seven 25 basis point hikes. The actions in aggregate made by the FOMC in 2018 are nearly inexcusable. Yet, the economy grew. Common folk don't understand the miracle that was in the face of such an aggressive central bank, and relative to the global environment.

This is Powell's chance. A chance at redemption. A chance to be worthy of the mantle of leadership. A chance to serve the flag. I said it yesterday... whom among us does not weep as the colors pass?

Use The Force, Salesforce

I told you that I was sitting out the Salesforce earnings. I told you that it was a gamble. What some of you knew was that as of early August I had made the choice to narrow my book. One of the names that I had sold three weeks ago in response to the presidential tweet machine has been Salesforce (CRM) . The name had been a top performer for me in the past, I was actually in the red on this particular tranche. No time for sentiment, I had made a decision to reduce what had been a slight bias toward overexposure to the cloud kings, and Salesforce had to go. Until Thursday that decision really did not look like a bad one. Friday morning, it surely will. (I sold VMware (VMW) the same day, so I am not a complete dope)

Salesforce went to tape on Thursday evening with the firm's Q2 financial performance. Impressive would be an understatement. EPS? Sizable Beat. Revenue? Beat. Subscription revenue? Beat. Operating margin improved, and operating cash flow simply crushed expectations. I am just stunned at the strength of that beat. 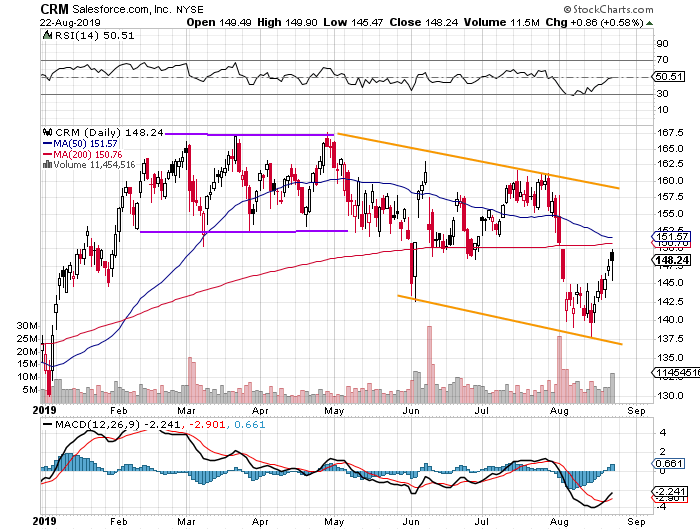 I showed you this very same chart yesterday. Overnight, the shares are trading close to $160. This should expose the upper bound top of our downward sloping channel under upward pressure. Friday's pricing should also pull the 50 day SMA away from the 200 day SMA, which is key. Should the trading range of Salesforce on this day create a high that halt the series if successively lower highs, I would feel this to be highly constructive.

I will not add on a day like this. I have never been one to chase. That said, I will be taking a look at premiums paid on the put side into November for strike prices down to $145 to see where the value is.

(Amazon and Salesforce are holdings in Jim Cramer's Action Alerts PLUS member club. Want to be alerted before Jim Cramer buys or sells AMZN or CRM? Learn more now.)

Get an email alert each time I write an article for Real Money. Click the "+Follow" next to my byline to this article.
TAGS: Economy | Federal Reserve | Investing | Markets | Options | Stocks | Technical Analysis | Trading | Treasury Bonds | Stock of the Day