Interesting. When I used to play baseball, my shoes (plain black of course) were often referred to as spikes. The metal beneath the shoe dug into the ground a little better than modern, plastic "cleats" used in most leagues these days. Those metal spikes were seen as dangerous. A defensive player could be cut badly should a base runner slide into a base, "spikes-up", or accidentally step on a defensive player's hand in the event of a close play at base. Speaking of "spikes-up", you guys notice that closing bell action on Friday? Gee whiz.

A sharp rally late on Friday that really only encompassed the final six minutes or so of trade, left equities in a much better spot than they had been all day. In fact the late spike resembles a very similar close that traders had experienced just the day prior on Thursday. I thought this a little odd so I took a look. Same thing happened last Monday. Same thing happened three times the week prior. Does six times in 10 days make a trend? I don't know that answer, but this knowledge sure will impact my overall level of cognizance as we enter closing auctions. My thought? Somebody's algorithm (more than one) is intentionally buying shares very late in the day. Somebody big. Somebody else's (more than one) algorithm is feeding off of this trend, as they race each other into the close. Conclusion? Until this does not work, human traders looking to exit longs ahead of a close, or cover shorts before a final bell should act accordingly. Beaten by the machines? Not us. Let them go back to giggling mindlessly while watching YouTube videos at work. We'll stay focused on identifying their patterns and beat them while they complain about their jobs. Let them count on our ignorance.

A lot of wood to cut. Let's leave it at that. Without a deal, parts of the U.S. federal government will start shutting down again this Friday. Reports are that talks are, yes... breaking down. Will that lead to another month of uncertain labor and it's impact? Politically, I find this hard to fathom, as neither side gained a darned thing from the last shut down. Constituents on both sides of the aisle clearly blamed the other, while from a markets/economics perspective, I think it's safe to say that nearly all sentiment based survey had shown overt weakness near to the end of that prior period. Does anyone really think that they can get away with another? Stalling points remain funding for a barrier at the southern U.S. border, and believe it or not... the number of detention beds available for those held by Immigration and Customs Enforcement (ICE) personnel. Emergency declaration? Still a wildcard.

U.S. representatives are in Beijing today (Monday) to kick start trade talks between the planet's two largest economies at a lower level coming off of the Lunar New Year holiday in Asia, and ahead of higher level talks to be held later this week. Those negotiations will include Treasury Secretary Steven Mnuchin, U.S. Trade Representative Robert Lighthizer, and Chinese Vice Premier Liu He. Scuttlebutt now has it that Presidents Trump and Xi may meet mid-March some time in Florida. My take? Anything can still go wrong. The deadline that matters here is one minute after midnight Eastern Time on March 2nd. Thoughts there? Should a meeting already be scheduled between the leaders by this date, the deadline will be pushed out. That's good news. The 10% tariffs already in place, even if left alone? That's bad news. Projected earnings are telling you that. Dollar valuations are telling you that. A long way from solved, this is.

Domestic equity markets remain in what looks to be a confirmed uptrend, despite hitting a brick wall for the S&P 500 at the 200 day simple moving average last week. Also... despite the fact that according to EPFR Global, U.S. equity funds have now suffered 10 consecutive weeks of net outflows. Meanwhile, yields have largely contracted across the board, and earnings projections remain stronger for firms with a higher mix of revenue derived from within U.S. borders than for those that earn a greater percentage of revenue elsewhere. So, is the trend your friend. Is the trend even trustworthy? I'll tell you this. Headlines. positive or negative on the China trade issue will ultimately rule the day. Even with the "relief rally" that was presented as one of the greatest and longest Santa Claus rallies of recent memory, this data tells me that there is plenty of dry powder available on good news.

A good reason, I think... to be mildly aggressive with the equity portion of an investor's investable assets, while maintaining the defensive side, such as cash, gold, non-corporate debt securities at healthy enough levels. More than ever, it has become in my opinion necessary to manage simultaneously with a youthful openness to growth, as well as a doomsday prepper's lack of trust. The idea, I think might be to set up so that the investor will almost certainly allow for a level of underperformance to the upside while ensuring outperformance to the downside. Key word here... mitigate.

A story ran at a well known competitor over the weekend suggesting several mergers that the author would like to see happen in 2019. 10 deals were briefly suggested. I have positions in several of the names mentioned in that article, one of which caught my attention. The author opined on perhaps an Oracle (ORCL) takeover of Salesforce (CRM) . If you read me often, or listen to me on television, then you know that I have long been interested as well as invested in the business cloud. You also know that Salesforce has long been one of my key names.

Now, I have no idea if such speculation is just fanciful in nature given Salesforce CEO Marc Benioff's background at Oracle. The author suggests that this kind of activity could pick up now that IBM (IBM) has opened the wallet for Red Hat (RHT) . What I do know is that Salesforce reports in two weeks and that's for real. For the fourth quarter, expectations are that the firm will put EPS of $0.55 to the tape on revenue of $3.56 billion. If realized, these results paint a picture of continued growth (57% earnings growth on 24.9% revenue growth). What we'll need to see as investors is can the impressive growth result in improved margins. While gross margin has been impressive, both operating margin and profit margin have lagged. This has led to total debt that has left Current Ratios below the 1.0 threshold that I generally look for. Still, that growth must be paid for, so in a business like this, I fell that this must be understood. 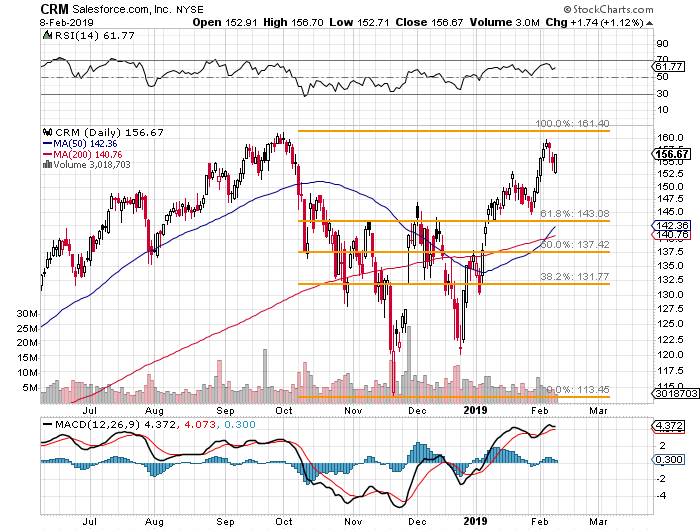 Interesting. The stock has very nearly retraced 100% of the late 2018 selloff. What I see when I look at this chart is two-fold. I see that "golden cross" that has presented itself as the 50 day SMA crossed over the 200 day SMA since February began. I see what kind of looks like a cup with handle formation. The cup is obviously quite jagged, not so rounded, ( a V shape is less bullish than U shape, this is kind of a W) but given the market's own volatility during the period I am thinking that this might be acceptable. This is where I focus.

As you can see, the recent activity has now started to draw the handle to the cup. In my experience, after this drawback (which could still have some give), the ensuing rally in the name can go for as far as the cup was deep (... and this cup was pretty deep). If earnings are well received in two weeks, we could be looking at a $200 stock. That's well above the highest target price in the industry right now of $189. That is five star analyst John Difucci at Jefferies, by the way. The industry average, according to TipRanks is a little above $172.

Note: I fully intend to add to my long position on this handle which is well above my net basis, and not a step that I take very lightly. FYI, March 1st $149 puts were still valued at about $2.25 on Friday afternoon.

Get an email alert each time I write an article for Real Money. Click the "+Follow" next to my byline to this article.
TAGS: Earnings | Investing | Markets | Options | Stocks | Technical Analysis | Trading | Software & Services | China | Market Recon