Approaching Lake Lerna. Upon nearing the swamp, Hercules was forced to cover his mouth and nose with a cloth in order to protect himself from the poison that wafted through the air. Ahead was a darkened cave. The unknown. The unknowable. Out of the depth of invisibility and into the light came the beast. Not just any beast, but a terrifying, aggressive multi-headed monster. Some say all the hero had was a sword, others a farmer's sickle. Time has passed. Memories have grown thin. Legends have grown large. Lines in between myth and history have now blurred. I choose to believe that it was a sword. For that is what a storied hero would use. Hercules used something else too, though. His head.

For this battle would not be easy. Upon instinct, Hercules would decapitate one head, then another. Each time that "The Hydra" lost one head, two more almost instantly grew back in its place. Hercules was known for strength and speed. Even he was not strong enough, nor fast enough to sever all of the Hydra's heads at once. This was a fight that could quickly become lost unless Hercules became creative, and upon realizing that, accepted help. He called out for help. Even Hercules, only half human, and half immortal understood, adapted, and then overcame.

Between Hercules and his nephew Iolaus, the two warriors were able to use the beast's own venom against itself, preventing the multiple dangers present from increasing any further. Finally, this monster had only the last "immortal" head left, and upon removal, that beast defeated, relegated to the stars. To the pages of antiquity.

For the mythical Hercules, this battle with a dangerous beast capable of instant evolution in response to efforts that one might have thought otherwise lethal was the second of the hero's 12 labors. That fact that he accepted help was seen as a weakness by some, ingenuity by others. Better the ability to carry on, I would think. Better to adapt, to overcome, to reassess, and to remain mission capable, than to have the old ones sing one's final song any earlier than necessary. Legends of old were not just stories, they had purpose.

We shift now from epic tales told millennia ago perhaps less for entertainment, but more as a means of interpretive enlightenment to what we in the calendar year 2020 might refer to as the "real world." We will move forward toward our own "Lake Lerna." We will cautiously approach the darkness of both the unknown and the unknowable, while protecting ourselves the very best we can. We will not carry the sword of a heroic warrior, nor a tool best used for harvesting grain. We will make use of the greatest weapon of all. The ability to reason. For that weight that you bear atop your shoulders... is such a weapon. If used properly. If constantly updated. If worked on. Most effectively used by those most capable of adjustment, of development, of realizing when it is best to lead, or even when it is best to follow.

The U.S. experienced consecutive days of more than 83K new Covid-19 infections nationally on Friday and Saturday. Blame what you want. Covid fatigue. The return of younger folks to college and school. Social gatherings. Colder weather. They all make sense. As someone who happened to contract Covid very early upon its arrival in New York, whose recovery has been long and difficult, I find it hard that anyone could still take this "beast" lightly, but we see people every day who act as if it were still 2019 or something. How grand to be so far removed as to still be that naive. Quite incredible. Still they gather. Still they wonder how Uncle So & So got sick a week after Junior's first birthday party. Then Aunt So & So two days later, and then five or six others within a couple of weeks of having sung to the baby that day. How could it be? We were careful, right?

While the U.S. was putting in back to back awful days of new infections, both Spain and Italy joined the community of European nations implementing new policies of mitigation that might possibly slow the spread, but will certainly injure further already damaged economies. Several aides to Vice President Mike Pence have now tested positive, including the VP's chief of staff Marc Short. Could this still be connected to the "rose garden" event? Have we any idea? A new outbreak, or an extension of an existing one.

This, all as Speaker Pelosi spoke publicly on Sunday. Madam Speaker hopes to hear from Treasury Secretary Steven Mnuchin on Monday (today) as the two sides carry on with fiscal stimulus negotiations. The self imposed deadline for getting a deal done by the election passed last Tuesday. Then passed again last Friday. There is no deadline. There is no deal. There are only the games people play. This deal becomes an agreement when it works politically. Not before. One would like to think that this would be more about keeping households and employers whole while society remains operationally handicapped. Beyond capturing votes, this just ever seems to be the case in DC, and that is quite unfortunate.

The beast appears as a virus. The response is medical, but that takes time. Mitigating spread hurts economies. This in itself requires repetitive and sustained policy response. Both fiscal and monetary, or are they now one and the same? The problem is globally damaging, yet locally politicized as a national election looms near. How sad.

The virus. Health care. The election. The macro. Earnings. Policy. All intertwined. All complex systems in their own right. Yet all capable of testing the limits of what we as a people understand to be the limits of "Complexity Theory." I won't go too deep into this topic as it would probably require more of a thesis than a "morning markets" column, but at the very least, I need all readers to be cognizant of the very real situation.

Complex and seemingly chaotic organizations. networks and systems can and do get to a point where they can not work independently. When it all works, it works like a charm. New, and apparently improved levels of order arise. Structure changes. Fundamental knowledge becomes viewed as old fashioned. "It's different this time."

It really is, because with a new order and a changed structure reliant upon systems no longer functioning independently comes not just leverage but unknown and unknowable leverage. In other words, unpriced risk. Do I know that I am right. I know nothing. Nothing except that from the perspective of earnings, from the perspective of economics, and from a technical perspective, the markets should be "okay." Yet, I am slow to add new risk. Yet, I am cautious, and more defensive than I thought that I would be at this point.

This is going to be a workout. This week brings plenty of data to the masses. Traders and investors will not just get that first look at third quarter GDP this Thursday, which should be excellent, they will get that number while markets deal with electoral risk, and viral transmission that threatens fourth quarter performance.

This week also presents a monster week for corporate earnings. 180 constituent members of the S&P 500 are set to report at some point this week. Many giants, including many Sarge names are included. We will hear from some longtime Sarge names such as Amazon (AMZN) , Apple (AAPL) , Microsoft (MSFT) , Pfizer (PFE) , as well as late addition Boeing (BA) among many others. To this point, roughly 27% of the S&P 500 has gone to the tape this season already. According to FactSet, 84% of these companies have beaten earnings expectations, while according to Ben Levisohn at Barron's... the average beat across this group is by a margin of 17.7%. This would be compared over time to average beat rates around 65% on average beat margins of just around 3.5%. In short, relative to expectations, earnings have been simply outstanding. Then again, that was with policy tailwinds that on the fiscal side that at least on Main Street are now drying up. So, we are cautious.

I do not know the answer, but I wanted to ask you the question. I will not draw on this chart, but this chart is just as good for the Nasdaq Composite, the Dow Jones Industrials, and for a number of key Sarge faves such as Microsoft and Nvidia (NVDA) . The question is "What do you see?" There are two answers. 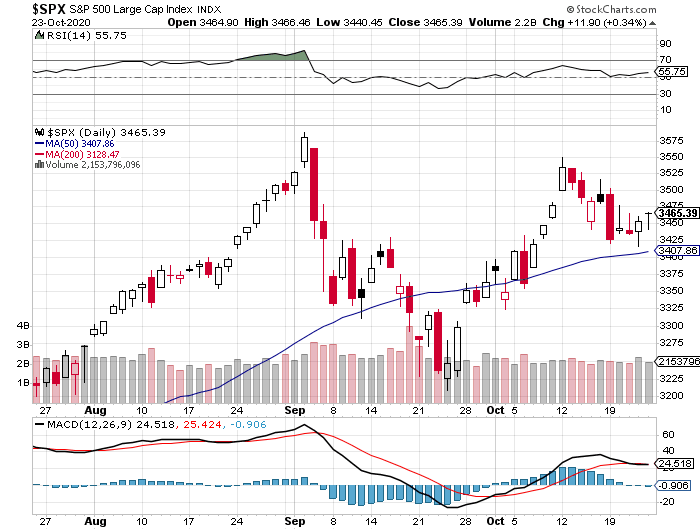 What is obvious is that this index among the others, as well as a number of high level securities is that holding the 50 day SMA is crucial, while Relative Strength and daily MACD's reveal little. So, what do you see?

You do realize that right now it is impossible to answer with sincerity unless one has something to sell. You do realize that these two patterns require significantly different posturing across the landscape of portfolio managers. Oh, and of kids like you and me. FYI, I think I see the "cup with handle" but kids... I'm not betting the farm.

Get an email alert each time I write an article for Real Money. Click the "+Follow" next to my byline to this article.
TAGS: Earnings | Economy | Investing | Markets | Politics | Stocks | Technical Analysis | Trading